END_OF_DOCUMENT_TOKEN_TO_BE_REPLACED

"THE TIME TO MAKE MONEY in the stock market," reckons Stephen Gandel – yet another senior writer at Money Magazine – is not when things are going gangbusters...”

(Don’t they have any juniors? Just wondering.)

"[The time to make money is] when things look as if they're going bust," he advises. "Just ask anyone who invested in beaten-down US stocks after the market sank in the immediate aftermath of 9/11."

Okay, let's ask him. Because things really do look like they're "going bust" right now, starting at Bear Stearns and winding up there again 10 months later...but not before feeding into the global finance system and finally the very credibility of official currency itself.

Say, value-loving investor, how did things pan out after you bought beaten-down stocks post-9/11...? 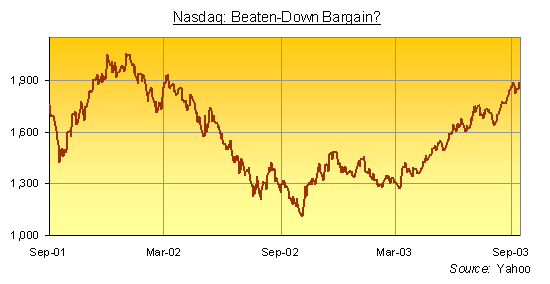 "Oh gee, what a move!" says our beaten-down buyer.

"I bought both the S&P and the Nasdaq when the markets re-opened on Sept. 17th, and I made 30% on tech stocks and 12% on broader stocks in less than three months.

"Trouble is, I didn't know a good thing when I got it, and I was underwater again by July the next year. And thanks to the deeper trend – which was downhill all the way from March of 2000 – I was actually fast on my way to losing one-fifth of my money by the real bottom of mid-Oct. 2002.

"It took me another seven months on the QQQQ to get back to break-even from there. The S&P didn't get back to its post-9/11 low until August 2003."

What? Your plucky beaten-down bargains took nearly two years to get straight?

"Hmm, yeah. Kinda got screwed by the trend – which was, like I said, clearly down. Even though the bounce looked a shoo-in. Which it was." 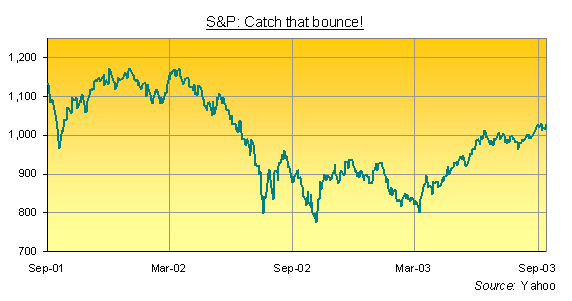 Take heart, investors everywhere! "Step out of the stock market, even temporarily, and you may miss the whole point of owning stocks," says Janice Revell, another senior writer at CNN's Money Magazine.

The whole point being, of course, that bear markets in stocks – sparked by mal-investments in credit-fuelled bubbles – take a good deal longer to work out than anyone ever dares guess.