END_OF_DOCUMENT_TOKEN_TO_BE_REPLACED

Devaluation, diversification, decline...
THE RESULTS of our New Year 2022 survey are in, writes Adrian Ash at BullionVault...
...and gold prices are set to rise 10-20% by next 31st December according to BullionVault's latest user study.
That would take prices up to $2045 per ounce on New Year's Eve, says the average forecast from readers of our Weekly Update.
The forecast rise of 12.3% in Dollar gold prices would take the yellow metal just below its most recent all-time high, hit in August 2020 at $2075.
Silver also received the largest number of price predictions in the 10% and 20% ranges, putting its average forecast price just above $26 per ounce for rise of 17.1% this year.
Platinum is expected on average to gain 10.6% according to BullionVault users, now predicting a near-reversal of last year's drop to end 2022 at a price $1034.
Why are precious-metal investors so bullish on the asset class as a whole?
In short, let's call it the 3D case for bullion. Most especially gold. 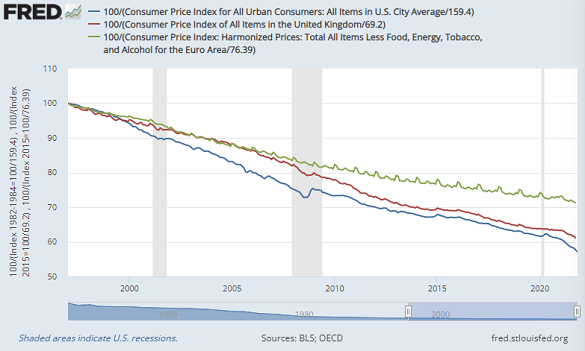 First up, devaluation.
Specifically, the devaluation of the Dollar, Pound or Euro in your pocket...
...now losing 30-40% of their purchasing power over the last 25 years, depending on which measure of inflation you pick.
Inflation was named as the No.1 reason to invest in precious metals in our New Year 2022 survey, polling the top spot among investor motivations with 36.1% of the vote. And small wonder.
Returns on money-in-the-bank or bonds haven't been higher than inflation since 2008. Net result? A grinding loss of purchasing power in cash savings.
Higher government debt and uncertain economic growth have furthered this trend, because while central banks everywhere say they want to fight inflation...
...now running at multi-decade highs as the massive Covid stimulus packages run into massive post-lockdown supply-chain troubles, plus the massive and inevitable cost-price pressures of trying to replace the world's fossil-fuel addiction with new green energy tech...
...the reality is that raising the cost of borrowing to any meaningful extent looks politically impossible.
Indeed, one-in-5 of our UK and Eurozone respondents think interest rates won't beat inflation again during their lifetime.
Among US respondents, that rises to 1-in-4.
Short-termer, inflation will also be the No.1 driver of bullion prices in 2022 according to our latest poll, named by 28.2% of all respondents. 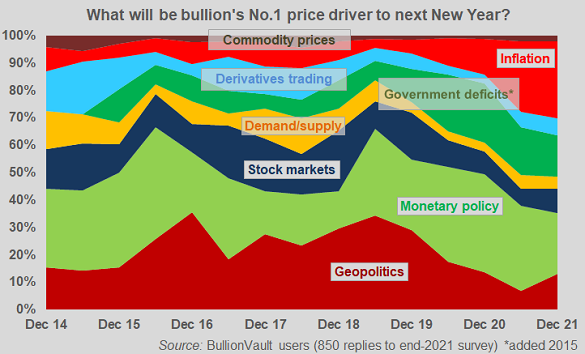 That marks inflation's largest share as the No.1 driver of precious metals in any survey since we began this twice-annual study back in December 2014.
The link? Physical bullion offers a natural alternative to cash and bonds, because it is rare, tightly supplied, and free of default risk. Unlike cash in the bank or debt investments.
That works both ways of course, and bullion prices have suffered already this New Year as interest-rate traders bet on the US Fed raising from zero sooner than later.
But when inflation is jumping and central banks aren't coming close, the time-worn appeal of precious metals is very likely to rise, even if the Fed, the ECB, Bank of England and the rest do try to show willing.
More on this as 2022 unfolds no doubt. Much more.
Second today, diversification.
BullionVault's latest survey says that a third (32.2%) of precious-metal investors are buying bullion to spread risk and diversify their holdings.
History suggests they're right, showing that gold performs well when other assets do badly...most of all the stock market...
...and most of all when people lose confidence in central banks’ abilities to contain a crisis.
This can help during short-term shocks, such as 9/11 in 2001 or the Brexit referendum of 2016. But gold is most effective in offsetting longer-term losses in equities such as the DotCom Crash and the global financial crisis. 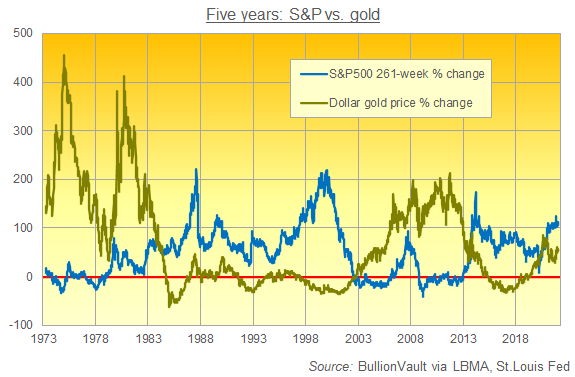 While this insurance function isn't guaranteed, gold priced in Dollars has over the last half-century risen pretty much every time the S&P500 index has lost value from 5 years before...
...and that diversification has also paid off for Eurozone and UK investors as well.
Last but not least, decline. The risk of an economic slowdown, that is.
Poor economic outlook is the third key motivation for investing in precious metals according to our latest survey, pulling 15.1% of those votes. Longer-term, this also points to the underlying decline of Western economic power relative to Asia...
...shown here by the USA's economic output (blue) versus China's (in red). 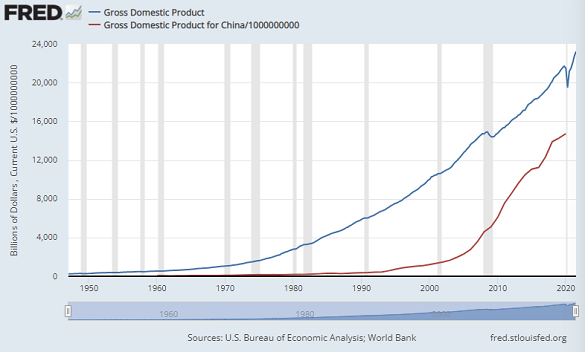 The world's 2nd largest and fast-growing major economies respectively, China and India have a historic love of gold which, while it ebbs and flows short term, doesn't show any signs of receding longer-term, despite wider changes and trends in consumer behaviour.
No, jewellery demand from these demographic giants doesn't tend to impact gold prices short-term. But between them, India and China's total gold demand accounts for one ounce in every two bought worldwide each year.
This accumulation means that, relatively speaking, there will be less gold available elsewhere over time. Western investors can get ahead of this trend, buying gold as Asian households spend more of their increasing purchasing power on a crucial asset for their long-term savings.
But hang on for a second.
Didn't this 3D case for gold and precious metals in 2022 also apply at the start of last year?
Yes, it did. 2020 was however a very hard act to follow for gold, because of that year's record inflows, and it's a fact that the precious metal has struggled despite the rise in inflation.
Private investors and money managers bought unprecedented quantities of bullion and gold-backed ETF trust funds as the Covid Crisis began, but while new inflows in 2021 lagged that surge, the vast bulk of 2020’s new allocations remain in place, showing confidence in gold's role as long-term portfolio insurance.
Last year's fresh record highs in global stock markets also reduced the urgency of buying gold as a hedge, and that confidence in risk assets may well continue to curb new inflows to precious metals as 2022 begins and beyond.
This presents an opportunity for more long-term minded investors, because modern history shows that the best time to buy gold as portfolio insurance is when other people are ignoring it, making prices less elevated and offering greater upside when stock markets inevitably take a prolonged dive in due course.
Bottom line? New Year 2022 faces investors and savers everywhere with record-high stock markets, economic uncertainty and the worst inflation for three decades.
BullionVault users clearly believe that precious metals offer at least part of the solution.