END_OF_DOCUMENT_TOKEN_TO_BE_REPLACED

Want a racing certainty for the coming year? Take a look at the US Dollar & gold...

A post-Olympics crash in China, perhaps, tipping its near-10% annual rate of expansion into an historic slump...

The first annual fall in UK house prices since 1995, maybe, unwinding a chunk of the near-quadrupling of London real estate values...

In the United States, a bottom might finally be found in Florida or Californian real estate. But we'd expect Paris Hilton to win the White House with Ron Paul as her running mate before then.

Yes, the Dow Jones stock index could push higher still to new all-time highs...even measured in terms of the Euro, rather than simply counted in the fast-vanishing US Dollar.

But the New Year has already brought the world one new all-time high that clearly says otherwise – and it only took one trading session for the Gold Market to jump 2% and break its three-decade record of $850 per ounce.

The anti-everything-else, gold clearly signals more trouble ahead for the rest of the world's investment markets – starting with the very value of money itself. That's the nagging doubt that drove Gold Prices higher every year between 2001 and 2007.

And here at BullionVault, we think it will take more than a bounce in the Dollar to reverse gold's seven-year bull market, too. 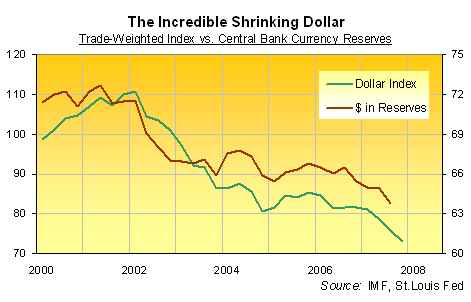 We don't doubt that newly-penned gags on Jay Leno's Tonight show might turn up this year alongside a pause in the Dollar's collapse.

By the end of Sept., says the latest data from the International Monetary Fund (IMF), the US Dollar accounted for less than 64% of foreign currency reserves worldwide. That might cue the Greenback to thumb its nose at the Euro, now risen above 26% of official cash reserves worldwide.

Factor in the Dollar-doom cover stories from magazines including The Economist and Newsweek, and the case for a contrarian play only gets stronger. Everyone agrees the Dollar looks sure to keep falling, even the policy wonks of the world's central banks! And as a very successful options trader once reminded me, the markets are always sure to do whatever it takes to screw the most people the most.

So maybe it's time for a surprise from the Greenback, now one-third cheaper than this time six years ago. Spanking the world's central bankers – and sucker-punching private investors, now busy gearing up on the forex markets – a turnaround in the US currency might just coincide with a genuine political crisis in the 13-nation Eurozone, too.

But "with Bernanke at the Fed and Paulson at the Treasury, and a Euro that could
face some problems (a break-up, some believe) because of badly deteriorating economic conditions in Italy, Spain, Portugal, and Greece," as Marc Faber writes in the latest edition of his Gloom, Boom & Doom report, "precious metals are likely to outperform financial assets for some years to come."

Indeed, whatever comes in the Presidential race – and no matter what happens to inflation in the cost of living, now running at multi-decade highs in Europe and China, despite their surging currencies – the real driver of gold's seven-year bull market looks to be the New Year's one racing certainty.

Governments and central banks the world over will refuse in 2008 to protect cash savers and bond buyers. They'll cut or hold interest rates in the forlorn hope of helping debtors instead, destroying the buying power of all official money.

Yes, gold might fail to rise as a result. But that would prove a heart-stopping shock, far more surprising than the most likely "shock" – that gold keeps on rising even if the US Dollar stops falling against other government currencies.

Just take a look at how the Gold Market got here today. The new record highs hit on 2 Jan. 2008 came for nearly everyone Buying Gold on the last trading day of 2007, no matter whether they bought in US Dollars, the Euro, British Pounds, Swiss Francs...Canadian, Aussie or New Zealand Dollars...Indian Rupees or South African Rand...Thai Baht or Chinese Remnimbi.

Only Japanese investors still hold a currency today worth more against gold than at some point in the past. And the irony there is so tasty, Burger King should offer it on the Whopper.

Near-zero interest rates failed to kick-start the Japanese economy for 18 years after its real-estate and financial bubbles popped. Tinkering with target rates of less than 1% since 1995, the Bank of Japan still hasn't worked any magic by trying to destroy the value of the currency it prints.

Yet it's the Japanese lesson of the early 1990s that's now pushing the US Fed, Bank of England, ECB in Frankfurt and pretty much every other developed-world central bank to offer up more money via cheap interest rates as a way of defending the current financial bubble from collapse.

How come? Mistaking more money for more wealth whenever they look at Japan, central bankers now have this error scratched onto their corneas. "The failure to end deflation [meaning falling prices, wages and real estate values] in Japan does not necessarily reflect any technical infeasibility of achieving that goal," announced Ben Bernanke in a speech of Nov. 2002.

Blaming instead a "structural" need to restore Japanese banks and corporations to solvency – an eerie forecast, perhaps, of the huge short-term liquidity injections co-ordinated by the Fed, ECB, Bank of Canada and Bank of England right now – the  current chairman of the Federal Reserve added that:

"I do not view the Japanese experience as evidence against the general conclusion that US policymakers have the tools they need to prevent, and, if necessary, to cure a deflationary recession in the United States."

Put that another way, as Bernanke himself did in 2004, and "excessively cautious monetary policy did play a role in [Japan's] lost decade...because it did not do all that it could have done to arrest and reverse the deflation."

Excessively cautious monetary policy? The Bank of Japan took interest rates for cash savers below 0.2%...and it's left them there for the last 13 years. The only Japanese citizens to benefit so far have been investors choosing to Buy Gold. 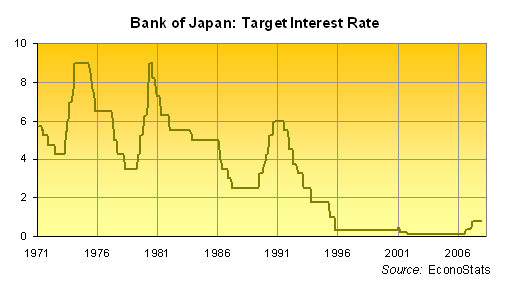 Nearly two decades after the Japanese offered the world a lesson in what can happen when excess credit and financial innovation turn first to bubble and then bust, average wages are still falling, down another 2.1% in November. Household spending fell 0.6%, whilst industrial production dropped by 1.6%...and the cost of living rose by 0.4%.

All this in a currency that stubbornly refuses to sink, meantime, despite the Bank of Japan's best efforts to destroy the very money that it prints. Proof positive, in fact, that a falling currency isn't necessary for Gold Prices to rise. Need more? Gold gained 31% last year for British investors – its eighth annual gain on the run – even as the Pound itself hit a two-decade top versus the Dollar. The European single currency gained nearly one-fifth versus the US currency last year, but the Gold Price in Euros also rose, gaining more than 21%. (That also disproves the common belief that gold and the Euro move in sync.)

Indeed, the price of gold measured against the world's five most important currencies – the US Dollar, Euros, Yen, Pound Sterling and Canadian Dollar – has now gained more than 150% since the start of this decade. Real rates of interest, on the other hand, have trended sharply lower, falling across the world even as oil-driven inflation – itself stoked by excessively easy money policy – has begun to roar.

As for Dollar alternatives, on the other hand, "among commodities and currencies my preferred asset remains physical gold held outside the United States, for the simple reason that – depression or inflation – it is very likely to outperform financial assets.

"For gold, I believe the best is yet to come!" concludes Faber. Whereas Dollar rally or not, we believe here at BullionVault, the currency markets will prove just a suck of ever-shrinking real worth in 2008.