END_OF_DOCUMENT_TOKEN_TO_BE_REPLACED

But do they know just how big that difference really is?

We thought it would be interesting to measure how much greater silver's daily moves are – both in gains and declines – than gold.

We documented the daily price movements for both metals, and then calculated the difference using absolute values. To interpret the charts below, you need to know that:

With that in mind, here are the differences in daily price movements between silver and gold, measured in percentage points. 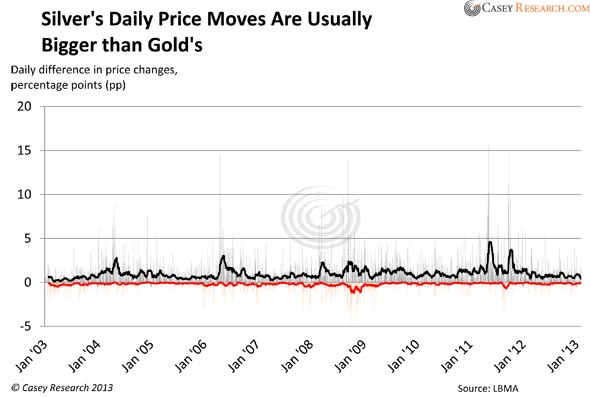 The chart is very busy, but it clearly shows that silver's daily price movements, more often than not, have been greater than gold's. In fact, from January 2003 through last week, silver's movements were larger 71.5% of the time. Regardless of the direction of precious metals on any given day, silver had a greater percentage move than gold roughly three out of four days.

Further, you'll notice that the magnitude of silver's movement has been much greater, too. On average, silver's price movements exceeded gold's by 1.3 percentage points, while on days gold had the bigger move the average was 0.81 percentage points. The moving averages easily show this.

So, is this greater volatility in silver normal? And what might we expect when the Mania Phase of this bull cycle kicks in?

The following chart maps the daily difference in price movement between gold and silver from January 1971 through December 1980. 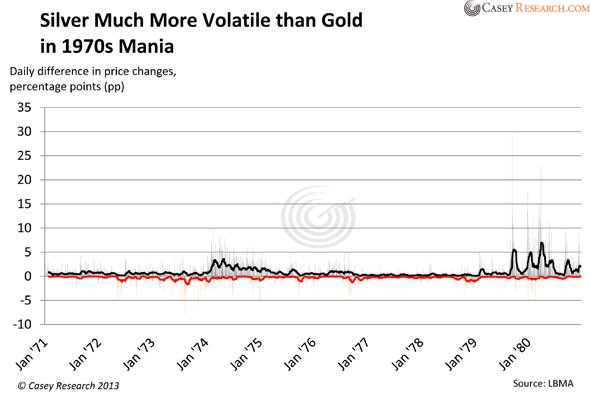 In the last big precious-metals mania, silver also logged bigger one-day movements than gold, in this case 63.5% of the time. On average, silver gained or lost 1.41 percentage points more than gold. When gold outperformed silver, roughly one-third of the time, the average percentage-point difference was 0.81.

You'll notice another interesting point. When the market entered the Mania Phase, silver's bigger one-day movements over gold's grew even bigger. During the 1979-1980 period, silver outperformed gold by an average of 2.46 percentage points, almost double what it did before the mania. In contrast, gold's average remained the same during the entire decade – 0.81.

What are the implications for investors?

On average, silver rises higher and falls further than gold. This is true as much today as it was in the 1970s. The difference has reached as much as 15 percentage points during this cycle, while it hit 30 during the last mania. This means that investors:

The historical record tells us that when we enter the mania, silver's volatility will increase. If we have a similar period as in 1979-'80, we can reasonably expect volatility to double over current levels. This will be the result of more investors joining the precious-metals industry. The moves will, on some days, be breathtaking. So again, one must be prepared emotionally to handle the volatility, as well as be more nimble when it comes to buying and selling.

Since current volatility is roughly half what it was during the last mania, we have yet another piece of evidence that indicates we're not in a bubble. Yet.

It also means that if silver resumes its uptrend, the producers will outpace the metal by a wide margin. The "snapback" in silver stocks should be tremendous – but not every company would benefit equally, as not all producers have the same profit potential, political exposure, management prowess, and growth prospects.

Buying physical gold or silver? Visit BullionVault to get access to the lowest prices possible...