END_OF_DOCUMENT_TOKEN_TO_BE_REPLACED

Jokes, art, gold and a final use for the Don's 'weak Dollar' policy...
THAT Nancy Spector at the Guggenheim in New York sounds like a right card, writes Adrian Ash at BullionVault.
Her newly leaked  email to the Trump White House of last September declined to lend Don and Mel their desired Van Gogh ('Landscape in the Snow'), but offered instead "a marvelous work by the celebrated contemporary Italian artist Maurizio Cattelan". The email is a work of art in itself.
Warm, friendly and apologetic about the Van Gogh not being available, that September 2017 email had a killer punchline. It would swing towards most readers only slowly, not cracking their jaw until they got to the image attached by Spector "for your reference."
No doubt the recipient however, art expert and White House curator Donna Hayashi Smith, saw it coming and knew to duck before telling the Trumps. If ever.
On the very same day she sent Hayashi Smith that email, Spector would later blog against Trump's executive order closing the US border to travellers from seven countries including Iran, Iraq and Syira. "Within the art world," she told visitor's to the Guggenheim website, "the 'Muslim ban' has threatened the values of cross-cultural exchange that lie at its very core."
But back before Trump's inauguaration or even election victory however, the Guggenheim had already pulled the chain on Donald Trump and the real-estate celebrity's famous love for all things bling.
" Cattelan's inspiration for 'America'," declared the gallery in September 2016, enjoying its own puns, "seems to spring from a variety of sources.
"Of course, there is the legacy of Duchamp's Fountain [a regular porcelain urinal signed by the artist as "R.Mutt, 1917" and thus art], which marks its centennial next year," the Guggenheim went on, installing the 18-carat gold toilet near the stairwell on the fifth floor of its Fifth Avenue home.
"[But] another cultural reference now also attends the work:
"In a word, Trump.
"The aesthetics of this 'throne' recall nothing so much as the gilded excess of Trump's real-estate ventures and private residences. While Cattelan agrees that he could hardly have known about the rise of Trump when he conceived of the piece [sometime after 2011], he said that, 'it was probably in the air...another layer, but [not] the only one.'..."
Eugh, Trump in the air? A layer of Don?!
Cattelan's work "[was] meant as something of a spoof on the growing wealth disparity between the 1% and the rest of us," claimed the Wall Street Journal when it visited the new facilities and found "long lines" forming with people wanting to use a toilet cast in 18-carat gold.
"I can confirm that it works," added art journalist Adam Gabbatt of The Guardian.
"Rarely are museum goers invited to touch works of art, much less relieve themselves on one," noted another review. "Art world enfant terrible [Cattelan] wanted the piece to be a luxury object accessible to the public...
"But placing it within a private museum also creates barriers for entry. Price for admission while the museum installs its new show is $15 for adults but that price will almost double to $25 when its collection fully reopen[ed]" later that fall.
Hey, that's inflation for you! But what about the inflating cost of all that gold used to make Cattelan's toilet joke so very real? 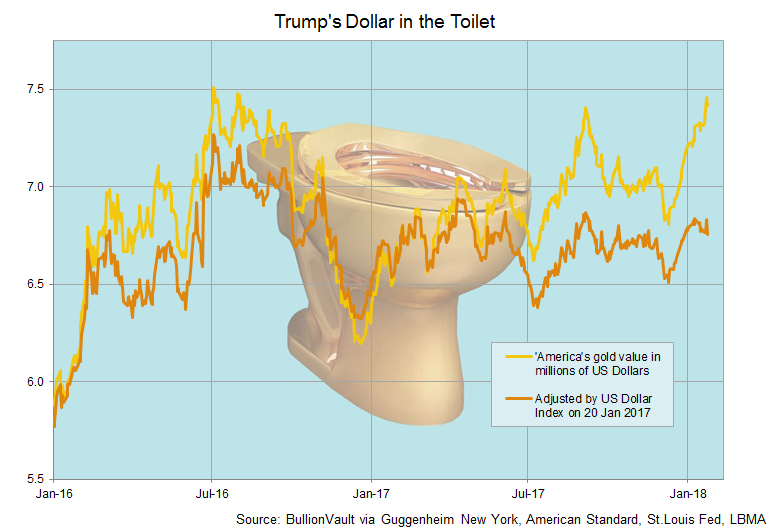 Based on a regular vitreous China bowl from American Standard ( very possibly this model made the casts for Cattelan's team in Italy) and assuming that its 18-carat alloy uses the standard yellow gold mixture, our estimate puts the bullion content of Cattelan's 'America' at 143 kilograms, some 315 lbs.
That's significantly more than other estimates doing the rounds, mostly because they wrongly assume that a golden toilet would weigh the same as a Chinal bowl of equivalent size. Whereas gold of course would be much heavier, even at 18 carat.
So if 'America' is a sturdy replica of a regular toilet (none of the, umm, reviews suggest otherwise) and we add the solid 18-carat gold seat ( apparently weighing in at 80 lbs), the Trumps were offered in lieu of that Van Gogh a crapper worth some $7.4m at today's bullion price.
Compare that against the $1.5m to $3m estimates out there, and Catellan's joke flips back onto gold. Because people just don't know how valuable the stuff is.
Nor do most folk realize just how much of that Dollar value currently comes thanks solely to the US currency's sharp decline since Trump took power.
Gold priced in the US Dollar has risen 11% since Trump's inauguration on 20 January 2017. But adjusted back to the Dollar's trade-weighted value on that day against the rest of the world's currencies, it has barely moved, gaining just 0.4%.
Cattelan's toilet, in other words, would contain not $7.4m of fine gold if priced in Inauguration Day Dollars, but just $6.7m. And while the world's commodity-news headlines are screaming about gold jumping already in 2018 to mid-2016 levels, the world's non-US fiat currencies have so far held their own against the yellow stuff.
Is that the final joke for Cattelan's 'America'? One which laughs manically as a celebrity real-estate mogul starts making good on his election promise to talk down the currency's value and so make inflation great again? Because rarely spotted by critics, perhaps the gold toilet's heaviest cultural reference reaches back to the anti-wealth violence of almost 100 years ago, almost as far back as the nod to Duchamp's all-too ordinary urinal.
"When we are victorious on a world scale," said Lenin, writing in Pravda on the ' Complete Victory of Socialism in 1921', "I think we shall use gold for the purpose of building public lavatories in the streets of some of the largest cities of the world."
The first post-Tsarist Tsar, Lenin of course wanted the workers of the world to unite and bring down the international Gold Standard, then pegging each currency's value to a certain quantity of bullion.
That system was indeed defeated by the cost and monetary inflation of two world wars, the welfare states built to thank (and placate) the people who fought them, the cost and monetary inflation of America accepting the imperial job from Britain, and the victory of something like socialism across Western Europe in the mid-to-late 20th Century.
But cut dead from its monetary role, gold retained its key cultural, artistic and indeed financial value. After all, the stuff never changes. It doesn't do anything. It doesn't even rust.
And long before the global soviet takes over and makes solid gold toilets for us all, we still think you'll first find US Dollars hanging off a nail on the back of the door.