END_OF_DOCUMENT_TOKEN_TO_BE_REPLACED

There's a real urgency to refinancing Uncle Sam's yawning debts. And the banks' too...

IT'S NOT JUST the US Treasury that needs to borrow more money, for longer, over the next few months and years.

The global banking sector faces the same challenge too, says a report from Moody's. You might expect them to err on over-caution after the mess the ratings agencies all made of judging subprime debt. But Moody's provides a handy chart to show how urgent the banks' refinancing has become... 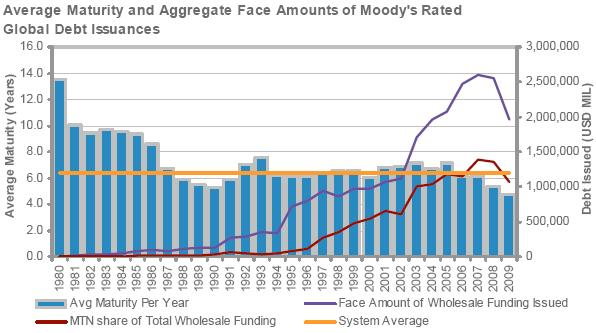 "The average maturities of new debt issuance by Moody's-rated banks around the world fell from 7.2 years to 4.7 years over the last five years," reports the Financial Times' Alpha blog – "the shortest average maturity on record.

Borrowing short and lending long was the powder keg which blew up the interbank money markets in mid-2007, courtesy of subprime America's fizzing fuse. Yet it only gathered speed as the financial crisis made financing tougher to find, and at ever-tighter durations as well.

Here in the UK alone, the unfunded liability (as the Bank of England calls the gap between customer deposits and loans...meaning the volume of bank lending financed by bank-borrowing on the money markets) swelled by one-third to £805 billion, almost 60% of GDP, from the big freeze of summer 2007 and the stock-market bottom of March '09.

To date, it's only reduced to the level hit when Northern Rock crashed. Which leaves a lot of cash to find in a hurry.

As for Uncle Sam, notes Bob English of the Precision Report at SeekingAlpha, "A full 35% of the current Treasury debt portfolio ($2.5 trillion) matures by the end of FY2010 and must be rolled over, in addition to the new debt that must be issued to cover the estimated FY2010 deficit of $1.25 to $1.75 trillion."

That's not a problem to Washington. Not yet, at least. Treasury announced last week that it's going to "push out" the average duration of outstanding bonds from the current 53 months towards the historical average of 60.

And with 30-year bond yields still lower today than they were before last winter's wipe-out in equities, commodities and virtually everything else bar the Dollar, who can blame them? 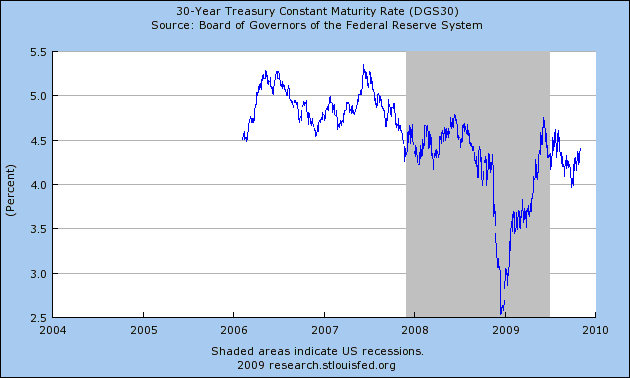 That 4.5% was a record low ahead of Lehmans' collapse. So whatever else the Fed's Treasury-bond purchases have achieved (or not), they can't really be faulted for keeping long-term borrowing costs low to date.

But "the budget deficit, while not expanding, is still at levels unimaginable a few years ago," as one New York economist – Chris Rupkey, chief number-cruncher at Bank of Tokyo-Mitsubishi UFJ's Manhattan branch – put it to Bloomberg.

"With receipts on the weak side, the Treasury will have its work cut out for it when it comes to financing the government's flood of red ink." Most especially with today's near-record-low bond yields threatening to slip away from Uncle Sam's grasp...just when he needs them most.

That only makes the rush to refinance with long-dated bonds more urgent still.