END_OF_DOCUMENT_TOKEN_TO_BE_REPLACED

SO WHAT ARE the odds? Things that just shouldn't happen simply keep happening, writes Adrian Ash, head of research at BullionVault.

"Perhaps something was changing in the asset world to have caused so many outliers in the last 35 years," asks GMO asset management's Jeremy Grantham in his new letter to clients.

Reviewing everything from the stock-market crash of 1974 to US housing's "first-ever nationwide bubble" thirty years later, "my [investing] career...has been filled with an unusual number of real outliers," Grantham concludes.

But perhaps, in a world cut free from all limits on the quantity of money, what used to look like unlikely, far-fetched "outliers" are becoming par for the course. Or perhaps the maths is just wonky.

"We were seeing things that were 25-standard deviation moves, several days in a row," claimed Goldman Sachs' chief financial officer David Viniar in August 2007. Yes, he was talking about losses, not bubbling gains. But he was also talking through his hat, at best.

"The probability of a 25-sigma event is comparable to the probability of winning the lottery 21 or 22 times in a row," found a paper for the Journal of Portfolio Management published the next spring. And events deemed that unlikely by your model either will not happen, or your model is junk.

Take silver (if you can get it) for instance. Silver Prices showed an annual gain of 175% at late-April's peak. (Dark forces, you see, are working to suppress silver.) That compares with an average year-on-year change, going back to Jan. 1969, of +11.9%. Divide the difference between those two numbers by the standard deviation in silver's year-on-year rate of change (don't glaze over, we're almost there) and you get what brown-corduroy beards on the BBC's Open University would call the "Z-score" – in late-April's case, a reading of 3.46.

The Z-score is counted in standard deviations – aka "sigma" – and anything above 2.0 sigma, according to people who make a living from such stuff, means you're looking at an outlier...a bubble perhaps. Because that kind of Z-score, at two standard deviations or more, marks the peak of Japan's 1989 equity bubble, the 1999 US tech-stock bubble, and the 2006 US housing bubble. (See the World Gold Council's excellent Bull Market in Perspective for more.)

A reading above 2.0 also shows up at silver's previous flirtation with $50 per ounce – squeezed into Bunker Hunt's corner of Jan. 1980 – plus six other brief periods of the last four decades, two of which peeped into the last 9 years' bull market, and one of which struck hard at the end of last month. 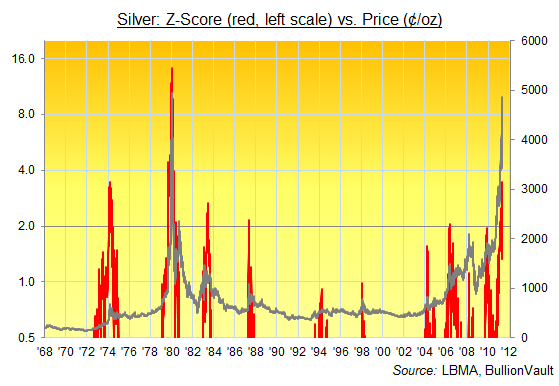 Note that the left axis, measuring the Z-score of the Silver Price's year-on-year price change, doesn't bother with low or negative readings, because we're only looking for bubbles.

Note also that it's shown on a log scale. Because when silver jumps, it really moves – so the Z-score doubles between each number on the axis.

Now, if the world mapped the nice, neat bell curve which statistical analysis calls "standard distribution", then a Z-Score of 2.0-plus would account for fewer than 1-in-20 of all prices moves. For silver, however, a reading of 2.0 or more shows on fewer than 1-in-38 of all trading days since Jan. 1969. April's peak of 3.46 was rarer than 1-in-a-hundred. And to date, all such "outlier" moves have all ended badly in silver. 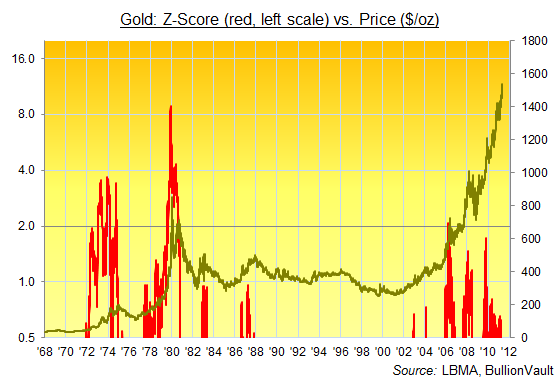 Five times in the last 42 years, the Gold Price in Dollars has risen so fast that its year-on-year gain has exceeded two or more times the standard deviation of all those daily year-on-year changes. Only two of those "bubble outliers" then blew up, however, and two of them (1975-6 and then May 2006) marked a mere hiatus before gold prices rose once again (8-fold and near-tripling respectively).

On a daily basis, breaching the 2-sigma level is less of a rarity for gold than silver – barely rarer than "normal distribution" would imply, in fact, with a near 1-in-20 frequency across all trading days in the last 42 years. And like we just saw, the curse of two sigmas has so far rewarded new gold buyers with 11% gains one year later on average – a post-bubble return that must taste like powdered unicorn's horn to Nikkei stockholders, tech-stock traders and Florida flippers.

Still, what's all this historical, statistical rubbish worth if you're out 25% in silver or 5% in gold today? Less than a $50 call on June silver, perhaps. But bubbles are about speed, not longevity. And in the 21st century so far, the prices of gold and silver have enjoyed plenty of both. GMO's Jeremy Grantham asks what changed to encourage ever-more financial outliers since the early '70s. The final end of the global gold standard looks a guilty-enough suspect, yet central banks have gone further still in the last 10 years, cutting the rate of interest to zero – and creating new "queasy" money explicitly aimed at reflating equity and housing bubbles.

Alarmingly frequent "bubbles" and "busts" in copper, wheat, crude oil, silver and pretty much all other natural resources might now be the collateral damage.