END_OF_DOCUMENT_TOKEN_TO_BE_REPLACED

Heaviest net selling since pre-Covid, first-ever silver outflow...
A SPIKE in bullion prices has seen private investors sell gold at the fastest pace since the eve of the Covid Crisis, writes Adrian Ash at BullionVault.
More notably still, they became net sellers of silver last month for the first time ever on the world's largest online and smartphone-app market in physical precious metals.
Net of customer purchases, users of BullionVault sold 1/5th of a tonne of gold last month, the most since January 2020 – when gold prices reached their highest since eary 2013 in US Dollar terms ahead of the Covid pandemic going global and helping send gold up to new all-time highs 6 months later – and almost twice the net addition which had taken total client holdings up to a new record this October.
Greater volatility in silver prices saw BullionVault users as a group turn net sellers of the indispensable metal for the first calendar month since we added it to the platform in late 2009, liquidating 2.7 of the record 1,244 tonnes held at the end of October.
With inflation at multi-decade highs as the Omicron variant of Covid-19 spurred a retreat in global stock markets, the number of people starting or adding to their gold holdings across November rose 11.3% from October's count, but the number of sellers jumped by 41.9% as gold prices reached multi-month highs.
That meant investor appetite for gold, as measured by the Gold Investor Index, fell 0.6 points from October to read 52.8, its lowest level since July 2019.
The month before that had seen the Index give only its second reading below 50.0 in its 12-year history, signalling more sellers than buyers on BullionVault as gold prices jumped to begin what proved a year-long surge to new all-time highs above $2000 per ounce. 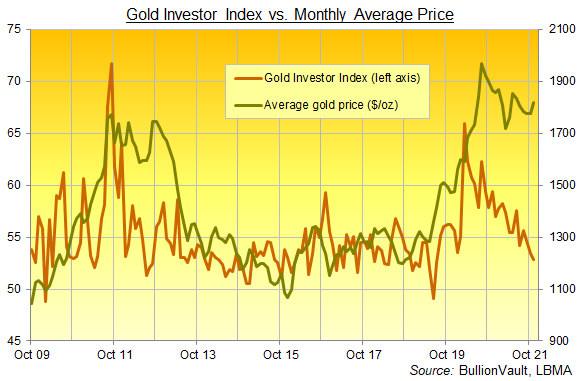 Two points to note.
First, this recent selling in gold and silver is very far from a rush for the exits, equating to just 0.4% and 0.2% respectively of investor holdings on BullionVault across November.
Second, this small liquidation came directly in response to prices spiking, offering short-term traders a quick profit on some or all of their holdings.
Gold priced in the Dollar snapped a 5-month decline in November, rising 6.7% low-to-high to reach its highest monthly average price since June at $1804 per ounce.
Gold priced in the British Pound meantime rose to its highest since January at £1352 and the price of gold in Euro terms also gained more than 4% to reach its highest month-average since November last year at €1595.
That saw net selling across BullionVault's global client base of 0.2 tonnes cut total customer holdings – all securely stored and insured in each client's choice of London, New York, Singapore, Toronto or Zurich – to just below 47.5 tonnes, worth $2.7 billion (£2.0bn, €2.4bn, ¥310bn). 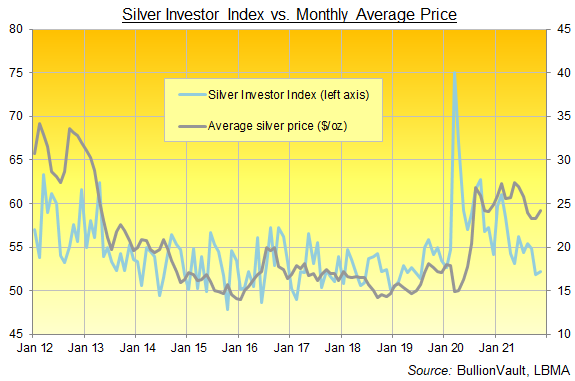 Silver prices were wilder still, jumping 10.2% by mid-month from an earlier low in US Dollar terms before ending November 4.8% down from October at $22.87 per ounce.
The small net selling among BullionVault users clipped total client holdings of the grey metal to a value of $913 million (£684m, €805m, ¥102bn). And that small 0.2% outflow contrasted with a small rise in the Silver Investor Index. It added 0.4 points from October's 27-month low to reach 52.2 in November.
That came as the number of private investors selling silver across November rose 15.8% from the previous month's count, and the number choosing to start or add to their silver holdings – all securely stored and insured in each client's choice of London, Singapore, Toronto or Zurich – rose 17.0% from October's 21-month low.
So while gold and silver's price spikes invited a little profit-taking among existing owners, new buyers continue to enter the precious metals markets, taking a position in physical bullion ahead of the New Year. And the long-term appeal of precious metals as a portfolio and currency hedge looks solid on the financial risks building as 2022 approaches.
Whether or when the US Fed finally dares to hike, interest rates will remain so far below inflation that confidence in central banks is likely to be critically weakened, and while gold tends to do well when other assets do badly, it does best when faith in monetary policy evaporates.
Attachments: