END_OF_DOCUMENT_TOKEN_TO_BE_REPLACED

GOLD PRICES edged lower as the US Dollar held onto last week's late gains in London trade Monday, while China imposed personal sanctions on senior US politicians and officials in retaliation for Washington's actions over Hong Kong, and President Trump signed an executive order to boost deficit spending after stimulus talks broke down, writes Atsuko Whitehouse at BullionVault.
Spot gold prices dipped 0.1% to $2032 per ounce after losing nearly 2% from yet another fresh all-time high, reached at $2075 late Thursday night.
The Dollar index – a measure of the US currency's value versus its major peers – held flat after having strengthened in its best day since June as US-China tensions flared last Friday.
Meanwhile, real interest rates, which strip out the effects of inflation, also held firm after rising by the most in a month last session after a stronger-than-forecast July jobs report from the Bureau of Labor Statistics contrasted with a very poor estimate from private-sector payroll providers ADP. 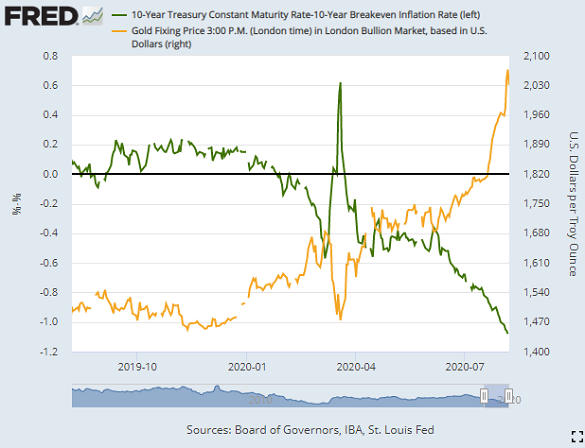 Silver today edged higher by 0.1% to $28.42 per ounce after declining 4.9% from Friday's new 7.5 year-high of $29.85 per ounce.
Platinum jumped nearly 3% to $983, but its discount to gold continued to hold at record levels near $1050 per ounce.
"Gold couldn't hold all its recent gains on Friday with both real US interest rates and the US Dollar working against the metal," said strategist John Reade at the minjing industry's World Gold Council.
"Combined with the recent run higher in gold and lower in the Dollar," adds Sameer Samana, Wells Fargo Investment's senior global market strategist, "it all adds up to some really stretched trends that needed a breather."
Gold investing ETF funds globally saw outflows on Friday, breaking a streak of 30 daily inflows according to Bloomberg as giant gold-backed ETF the SPDR Gold Trust (NYSEArca: GLD) saw profit-taking shrink its total shares in issue by 0.5% to need 1,262 tonnes of bullion backing.
Month to date however, net flows into gold-backed ETFs remain strong at nearly 28 tonnes after recording an 8th consecutive month of positive flows, adding 166 tonnes in July, according to World Gold Council data.
Beijing today imposed sanctions on 11 US citizens in response to similar measures from Washington on Chinese and Hong Kong officials including the territory's chief executive Carrie Lam last week, as the two sides escalate their dispute over Beijing's new security law for the city, where media tycoon and prominent pro-democracy advocate Jimmy Lai was arrested at the weekend.
Gold priced in terms of the Chinese Yuan meantime declined 0.8% from Friday's new record high at ¥445 per gram on the Shanghai Gold Exchange today.
That helped to reduce the deep discount versus London prices for metal landed in the No.1 gold miner, consumer and importer nation, cutting last week's new record to less than $57 per ounce on Monday.
Gold prices for European investors steadied at €1728 per ounce after losing 1.2% from Friday's new peak of €1749 per ounce.
Asian and European stocks were largely flat amid renewed US-China tensions as traders head out for summer holidays in Europe. Japan and Singapore markets are close for national holidays.
UK gold prices also moved sideways at £1557 per ounce, down 1.4% below Thursday's fresh high reached at £1578 ahead of this week's key economic data including unemployment and Q2 GDP.
Back in the US, and with a Covid-19 stimulus bill stalled in Congress, President Donald Trump on Saturday signed executive orders restoring enhanced unemployment payments to millions of Americans, some 5 million of whom have now contracted Covid-19 – a move expected to face legal challenges.