END_OF_DOCUMENT_TOKEN_TO_BE_REPLACED

Part 2 of a 3 part series (Part 1 here)...
THE PHOTOVOLTAIC industry didn't start to show on charts, according to the CPM Group of New York, until the year 2000 when they consumed approximately 1,000,000 ounces, writes Miguel Perez-Santalla at BullionVault.
Essentially that is barely a blip on the silver consumption chart. In fact in comparison to the smallest of the large consumers at the time, which was electronics, it was not even a tenth of their consumption.
It was not expected that this industry would become an important player in the silver market for years to come. The facts at hand of the silver data prove this out. It was not until the year 2008 that the industry reached any volumes of importance having consumed nearly 19,000,000 ounces.
What happened in the global economy was that major subsidies were being given for the development and promulgation of solar energy by sovereign nations. Germany, at first the largest consumer, was then followed by many other European nations in this objective. But it was not until the USA began to offer subsidies that the silver consumption for these products became of major importance.
The photovoltaic industry in certain countries became very important sectors and so with the global economic crisis many were to suffer. Spain specifically suffered tremendous economic losses in this industry when the state pulled its subsidies. This has been a major concern for developers and businesses involved in solar power.
It was at about the same time that the US began to offer subsidies to this industry that people who sold or produced solar cells were poised to make money now that the world's largest economy was behind it. At this point silver demand for the photovoltaic paste that was needed to produce solar cells was growing at a rapid pace.
Suddenly the last quarter of 2009 going into 2010 photovoltaic demand for silver exploded. Demand rose at a rate of 50% from the year before and would do so again in 2011. At this time the price of silver also began to soar. 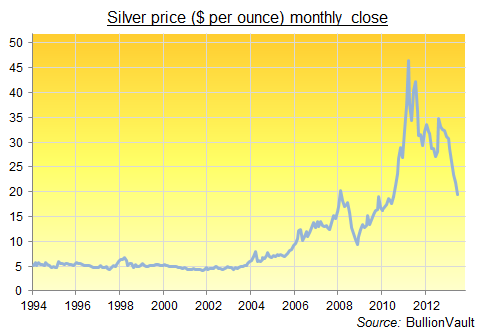 Was this new demand the driver of the price of silver? The answer simply put is no. Unfortunately for that industry the timing could not have been worse. The silver price began to move in leaps at the height of their demand, raising the production costs of their end product.
Because this industry needed a specific form of 999.9 silver and the amount needed was not readily available it caused a disruption in the marketplace. In a matter of a few months the silver futures market on the Comex exchange would go into backwardation.
Normally when there is plenty of supply futures price is higher than the current cash price for immediate delivery. But because of the need for the specific quality, much of the physical bars held on the Comex were being removed in search for the much-needed 999.9 fine silver. One of the largest silver producers in the world, Met-Mex Penoles of Mexico, was known to produce the proper quality bars and had delivered great quantities onto the exchange. So this led to the major withdrawals we saw.
During this time period there were many market commentators speculating that there was a physical shortage of silver. But the truth was there was plenty of 999.0 fine silver. Any shortages of retail bars and coins to the public were caused by a bottleneck of fabrication demand. It was not caused by the demand for silver by the PV industry.
Because of the coincidence of the price rise and the simultaneous demand from the PV industry many other commentators attributed rising price to their demand. But taking a close look at the demand of PV industry in comparison to the decline of the photographic industry during that time period you will note that this industries' demand only filled the decreasing demand of what was traditionally the demand of the photographic market. 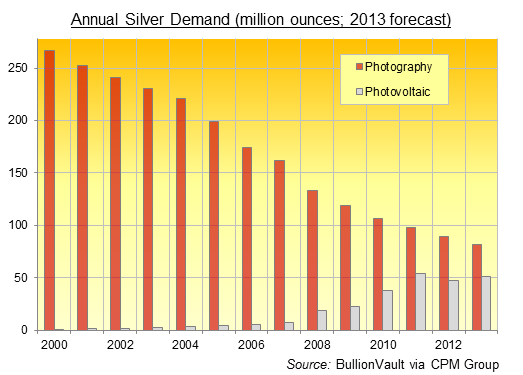 The silver producers were quite happy that the PV industry had entered the marketplace. Albeit for the foreseeable future it does not look like they will be able to reach the capacity of consumption at which the once powerful photographic film producers had reached.
Even though the PV industry is quite young they have been looking, because of the price rise in silver, to thrift or replace its use in production as much as possible. At the height of their consumption in 2011 the industry barely reached 19% of the height of the consumption of the photographic film industry in the year 2000. Add the problem of reduced government subsidies and it will take quite some time for this industry to become the savior the silver producers were looking for.
Silver has many industrial uses and its properties lend itself to constant new discoveries. With lower prices, consumption of silver for industrial purposes will remain stable or begin to rise. But higher prices at times are a detractor for the use of this metal.
Bottom line: silver fundamentals, though important, are not what has been the principal driver of the price in the last 10 years. It has been the demand to buy silver from  investment community that has truly filled the gap left by the departure of demand for the film industry.
Read the last installment of this three-part silver demand series to see who the major silver consumers are and what the future looks like it may bring.