END_OF_DOCUMENT_TOKEN_TO_BE_REPLACED

Silver bullion bars inflow surges to world's top 2 gold consumer nations...
IMPORTS of silver bars to China and India have leapt according to official data, contrasting with a mixed picture for gold.
Gold consumer demand is struggling in India – formerly the metal's No.1 market – yet imports of the metal have risen sharply from 2016's multi-year low, growing by one-third in the first half of the year, and jumping further over the summer as traders took advantage of lower duty rates on shipments from South Korea and Indonesia.
India's imports of silver bars however had already matched full-year 2016 over the first 6 months of 2017 according to analysts, with landings through the key terminal of Ahmedabad surging year-on-year in July and August.
"China has [also] been importing noticeably more silver for several months now, unlike gold," says a note from commodity analysts at Germany's Commerzbank. They report data showing year-to-date imports of silver bars and other items rising 48% from the first 8 months of 2016, with a 68% rise in August alone.
In contrast, gold imports that month through Hong Kong – the only official route until 2014 for bullion shipments into what has since become the world's No.1 consumer nation – recorded a near-2017 low Commerzbank says, and "confirmed the current weak gold demand in China." 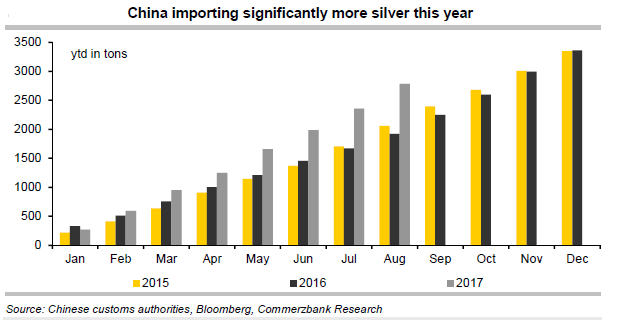 Swiss trade data show gold exports to Hong Kong from the world's major refining center slipping by nearly one-tenth in the first 8 months of 2017 compared with the same period last year.
Direct exports, however, from Switzerland to mainland China have grown by 5%, keeping the joint total little changed year-to-date at 366 tonnes, only just below the 372 tonnes exported to the two locations between January and August 2016.
India's household gold demand has recently halved from typical autumn levels, retailers report, as higher taxes and new financial rules deter people from buying despite this month's key Diwali festival.
"Silver is used widely for gifting during Diwali, especially by corporates," says one industry insider.
"In addition to purchases in the form of jewelry, Ganesha, Lakshmi idols, coins and bars, corporate gift items of silver and also silverware [all] have high demand," agrees a retailer in Ahmedabad.
"Therefore, stockists procure in hefty quantities." said Manoj Soni, a city-based jeweller.
While industrial use accounts for 45% of global silver end-use each year, it drives only 20-25% of Indian demand, said a new report from specialist analysts Metals Focus for the Washington-based Silver Institute of miners, refiners and users last month.
Looking at household demand, "the key drivers across all three segments – jewelry, silverware and physical investment – are the Rupee silver price and income growth. [So] it is not surprising to see that the fall in silver prices between 2012 and 2015 saw a massive expansion of local demand." 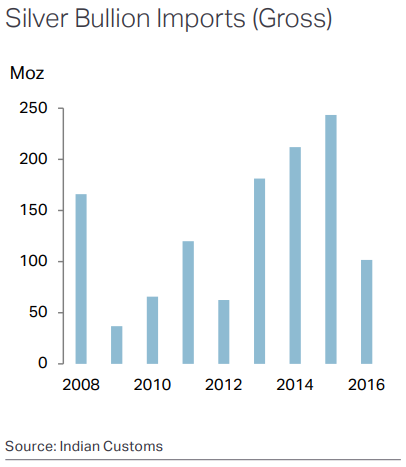 India's gross silver imports sank in 2016 to a 4-year low as prices rallied, falling over 60% by weight from the record peak of 2015 when low prices plus government action to cut gold imports saw India's silver investment demand surge to 3,400 tonnes on Metals Focus' data – almost one-tenth of all global end-use for the metal.