END_OF_DOCUMENT_TOKEN_TO_BE_REPLACED

The short story of half-a-trillion in debt trying to make its way home...


BANKS LIKE to lend money. Investors want to get rich. The Pope's been known to attend Mass.

Sounds simple enough. Once you've chosen your wool, just stick to your knitting.

Yet the first two groups – banks and investors – fought so hard to swap clothes in the last 10 years, it's little wonder they've both now worn holes in their sweaters. 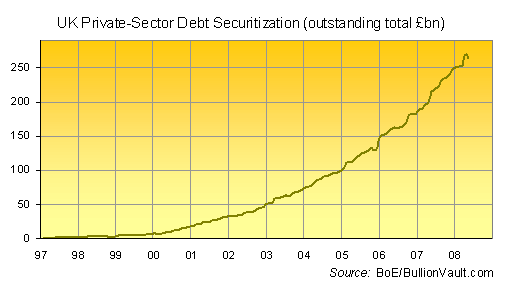 And why not? It worked in the States.

"It is hard to overstate the importance of these innovations," writes Stephen Cecchetti, professor of global finance at Brandeis International Business School in Boston.

Put another way, "mortgage-backed securities went from representing one-third of a small number to more than three-quarters of a large number. Securitization of consumer credit also went from zero in 1985 to 10% at the start of this decade."

But the innovation of securitized debt has been with us for much longer, however.

Over 300 years ago, the Dutch and then British governments began "securitizing" future tax receipts, issuing bonds to raise funds and using the cash to wage war (first against each other, and then together against the French). Forthcoming income would be used to make regular interest payments, plus full redemption of the initial sum when the bond reached maturity. A secondary market soon sprang up, where these government bonds were traded between investors, alongside the fast-growing London and Amsterdam stock markets.

Fast forward to the late-20th century, and all the securitized mortgage market lacked was the ability to guarantee future income at gunpoint. After all, a lender collects monthly payments from home-loan or credit card debtors. Bundle enough mortgages or credit-card loans together, and a pension fund manager can then take the role of lender instead. He'll receive those monthly repayments and book them as investment income.

He can even, if he so wishes, start trading these bonds on the open market...selling them on to other investors or pledging them as collateral against loans of his own.

Following the hugely successful US example, therefore, loans made to UK consumers and business were parceled and sold onto eager investors wanting a piece of Britain's own go-go economy. The bank or building society got an immediate return of the money it lent (plus a fee income, of course, split with the investment bankers who arranged the sale). The investor, meantime – whether a pension, insurance, hedge or overseas fund – got a fixed-income asset with a known maturity date, plus a little "payment default" risk to spice up their day.

This magic money-go-round enabled UK banks to make more loans to more people more often. Twenty-one per cent more debt, in fact, than the direct loans they themselves made and then kept on their books.

As for the lenders – now meaning foreign and UK investors – they got to turn a profit from buy-to-let, auto, small business and credit card loans made in Leeds, Lincoln and Lanarkshire. Okay, so they never met the borrowers. Nor did they get to study the borrower's pay slips or credit record. Nor did they see a surveyor's report of the real estate or fixed capital investments underpinning the whole deal.

But that was alright. Because the banks were still judging the risk as though they themselves would end up on the hook. Right?

Come the 2007 surge in sub-prime defaults in the United States, investors finally caught onto what securitization meant for the banks' risk assessment.

Just imagine! Families with low or no income cannot repay jumbo-sized loans! And if those triple-A rated borrowers hit trouble and walk away from their debts, who knows where the next blow-up might come...?

"Markets for many securities [are] currently closed," noted the Bank of England on 21st April. So "banks have on their balance sheets an 'overhang' of these assets."

The most troublesome assets were mortgages and credit-card debt, plus the "commercial paper" used to refinance securitized debts that the banks themselves held. But with no one to sell to – and no one willing to lend against these assets – "their financial position has been stretched by this overhang," the Bank of England went on, "so banks have been reluctant to make new loans, even to each other."

Hence the collapse in UK mortgage approvals to the very lowest on record, sparked by the number of mortgage products on offer collapsing from 10,000-plus to nearer 3,000 today. 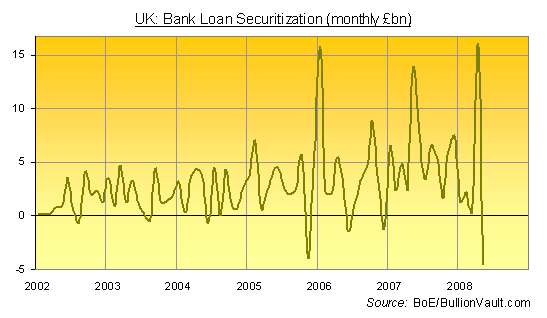 Funnily enough, however, UK banks and building societies still managed to sell a record total of £16 billion-worth ($31bn) of these assets – "securitized loans" – in April. That month outstripped the first four months of 2007 combined!

Who in the hell bought this debt nine months after the securitization bubble went bang? Step forward the central banks, waving tax-funded loans at the banking sector.

"Of €208 billion [$320bn] of eligible securities created, only about €5.8 billion have been placed with investors, according to calculations by J.P.Morgan. In one noteworthy deal in December, Rabobank, a Dutch institution, issued €30 billion of mortgage-backed securities, €27 billion of which were designed exclusively for refinancings with the ECB."

Word in the City says UK banks, via their continental subsidiaries, have also been dumping new securitized debt onto the ECB over in Frankfurt. The chart of ongoing securitizations above would suggest more than a little central-bank buying, as well.

But come April – at last! – the Bank of England opened its purse, widening the range of financial securities it accepts in return for lending to banks. They can now park "top rated" mortgage and other securitized debts with the Old Lady, reducing their "overhang" and moving ahead like nothing has changed.

Any coincidence that May then saw a record volume of debt shifted away from the banks?

Still playing tough, however, the Old Lady will only accept securitized debt that was already sat with the banks before the end of last year. And in the free market for securitized debt, the problem remains.

The Pope, we believe, is still a practicing Catholic. But selling new debt to non-bank investors looks all but impossible unless central banks – those "lenders of last resort" during a crisis – keep stepping up as "buyers of last resort" instead.

And with private-sector investors still trying to exit the assets they'd already bought, banks here in London (and no doubt on Wall Street) are having to do the strangest things. Ninety-five per cent of the credit they created last month, for example, went to buying back loans that they'd already sold to other investors.

Only another £255 billion to go...a mere half-trillion dollars of bank risk trying to get back to the source.