END_OF_DOCUMENT_TOKEN_TO_BE_REPLACED

Does Washington want to kill the Dollar's status as world reserve currency No.1...?

SO the YIELD offered to savers and investors by 10-year US Treasury bonds just fell through 3.0%, a five-decade low when reached (and then breached on the way down to 2.0%) in 2009.

More critically, the real 10-year yield – the rate of interest paid to new buyers after you account for inflation – just slipped back below zero, even on the official CPI measure of living costs.

You might think these miserly returns can't last long. The US government cannot steal from its creditors indefinitely. Not without T-bonds – and thus the Dollar – losing a big chunk of that same global demand which awards them "reserve" supremacy.

But where else would the world turn for its money No.1...? 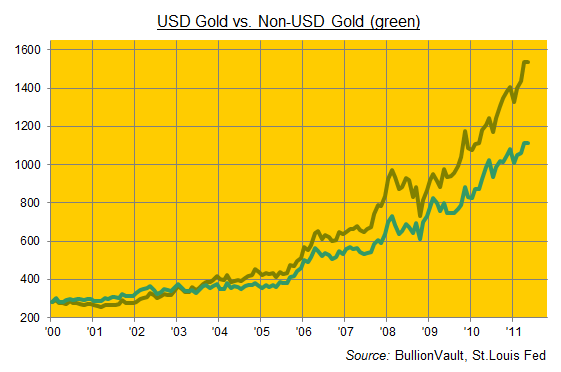 "Gold" says a mumbling chorus of observers, analysts, US politicos, and – most especially – investors. But gold lacks the one key quality which today's global economy appears to demand from its reserve currency:

You can't create gold at will. Nor can you destroy it either, not without cyanide to dissolve it. And this tight, reliable scarcity – the one thing all "money" must have to retain value, but to which today's currencies are all playing stranger – sets gold apart. As our chart shows, in fact, the gold price has quadrupled and more in the last decade, even when you discount the Dollar's falling foreign exchange rate.

Let's pretend that the Dollar hadn't lost 27% of its value since Jan. 2000 (as measured by the St.Louis Fed's trade-weighted Dollar Index). The gold price would still have ended May 2011 at $1115 per ounce. Meaning gold's bull market is very much ex-Dollar, too.

So too is the swelling of global currency reserves held by central banks and feeding the global liquidity beneath commodity and thus consumer prices... 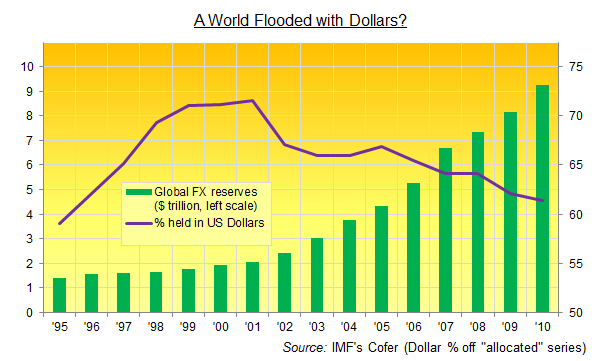 "Reserve currency status is a global public good that comes with a cost, and people often forget that cost," wrote Beijing-based academic Michael Pettis at the start of May.

We'll get back to the costs in a minute. For now, the communal benefits – far as we can see here at BullionVault – are liquidity, simplified trade, and a bottomless pit for high-saving nations.

Liquidity, because the Dollar is the most heavily traded currency, with the largest and most heavily traded financial markets. Simplified trade because, just as mankind still finds money more efficient than barter, so a single currency for invoicing and settlement cuts friction and costs. And a bottomless pit because, well, that's the only thing big enough to hold Asia's massive savings.

"Under-consuming countries are able to use the Dollar today for the same reason that European countries used colonialism in the past," says Pettis, glossing an idea from US Treasury and University of Maryland economist Kenneth Austin, writing in the Journal of World Economics – "as a way of allowing them to export capital and import foreign demand." The US can't help but meet demand for the Dollar by printing more, in short. It's the "excessive savers" who are really urging the flood of greenbacks and Treasury debt, runs the theory, by using the Dollar to hoard wealth rather than sharing the love by spending what they earn to buy US exports.

Now, whatever your politics, it's only this third use of Dollar reserves – Asia's "abuse", in many economists' view – which seeks long-term value in the US currency. Yes, gold would be superior for this purpose, at least on the evidence so far (adjusted for inflation, it's outpaced the returns to T-bond holders – with interest re-invested – almost 3-fold since 1951). But for the purposes of liquidity and global trade, what matters most is that other facet of money: as a means of exchange. And that's a role which gold currently plays nowhere.

Yes, money needs to retain its value between receipt and expense...between payday and your monthly bills...if it is to remain credible. Otherwise, welcome to Weimar at home, or the Pound Sterling's long post-WWII decline on the foreign exchanges. But the 1920 Mark was not the dominant currency in Europe, let alone globally, and Sterling's decline – according to Barry Eichengreen's book Exorbitant Privilege – really got motoring when Britain's former colonies, now its creditors, suddenly found themselves burdened with Pounds instead of the already pre-eminent trading currency, the Dollar.

Yet in the 1950s, "the Sterling area (35 countries and colonies pegged to Sterling and holding primarily Sterling reserves) accounted for half of world trade and Sterling accounted for over half of world foreign exchange reserves," explains Catherine Schenk, professor of International Economic History at the University of Glasgow. Sounds about even, right? But "in the early post-war years," says Schenk, "this share was even higher – the IMF estimated that official Sterling reserves, excluding those held by colonies, were four times the value of official USD reserves and that by 1947 Sterling accounted for about 87% of global foreign exchange reserves.

"It took ten years after the end of the war (and a 30% devaluation of the Pound) before the share of USD reserves exceeded that of sterling. This rather contradicts...assertion[s] that by 1945 the dethroning of Sterling was complete."

Why the 30% devaluation and this active "dethroning"...? Contrary to claims that London fought the Pound's decline, hoping to defend its political power, ability to borrow, and deep financial markets, "Archival evidence shows that from the 1950s many British ministers and officials recognized that the burdens of Sterling's role in terms of cost of borrowing and confidence in the exchange rate outweighed the benefits of issuing an international currency," Schenk finds. Which brings us back to the unseen costs of issuing the world's No.1 currency that Michael Pettis raised above.

"A lot of analysts argue that the predominance of the Dollar...reduces the cost of imports to American consumers and it lowers US government borrowing costs. But both arguments are seriously flawed, I think. Americans already over-consume, and so it is hard to argue that they benefit in the aggregate from lower consumption costs, especially when it comes at the expense of [US] employment...As for borrowing cheaply, what matters to a government's borrowing cost, as countries like Switzerland clearly demonstrate, is not major reserve currency status but rather creditworthiness. Because reserve currency status actually increases US borrowing [courtesy of Asian savings], it is more likely to undermine the ability of the US Treasury to finance itself cheaply than the loss of reserve status would."

Slipping back through 3.0% today, it's hard to see US borrowing costs being much cheaper if it didn't issue the No.1 currency. Still, America's "exorbitant privilege" of never having to settle its trade deficit in anything but its own currency isn't a benefit that China, or the Eurozone, looks too keen to enjoy for themselves any time soon. Both regions continue to seek export growth, and so neither would welcome the exchange-rate rise which would come with being the monetary lynchpin.

"If there is any chance that the [US currency's] status declines in the future," concludes Pettis, "it will require that Washington itself take the lead in forcing the world gradually to disengage from the Dollar."

Negative real interest rates and the last decade's 27% forex decline – plus the steady drip of Fed policymakers vowing a "strong Dollar" at the same time as printing it without limit – look a good start.