END_OF_DOCUMENT_TOKEN_TO_BE_REPLACED

Quantitative easing and zero rates haven't worked. So let's have much more of 'em, eh...?

So now equities have clearly regained their appeal after more than a decade of what finance professionals would rather we called "sub-optimal" returns, gold investing has lost its urgency for money managers. Indeed, it's become a neat little "short" to trade against whilst picking the next winner in the S&P's all-time high dash.

More telling than equities, however, gold's 20% drop in real terms since the top of summer 2011 has coincided with an upturn in real interest rates. You might not have noticed it. Anyone saving for retirement or trying to buy a pension in the annuities market certainly hasn't. But bond guru Bill Gross says interest rates are set to rise now the "30-year bull market in bonds ended in April."

But if you believe the gold market, however, the interest-rate cycle in fact turned higher two years ago. 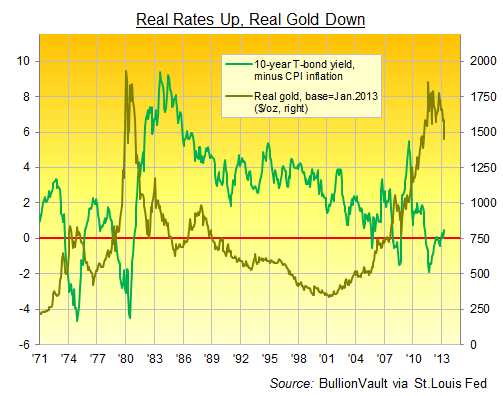 Gold famously offers a natural hedge against inflation ravaging the other assets in your retirement fund or savings portfolio. But it only acts as an inflation hedge when it needs to. Because if bonds or cash in the bank are beating inflation all by themselves, there's less need for gold's precious scarcity.

It wasn't, for instance, until the real yield offered by 10-year US Treasuries cracked below 2% per annum in 2001 that gold bullion finally shook itself out of its two-decade bear market, begun when real rates leapt to near-double digits to choke off inflation at the start of the 1980s. The real yields on both 10-year US Treasuries and UK gilts, after you account for official inflation rates, then kept on falling, finally bottoming at 30-year lows – just as gold peaked – almost two years ago.

Okay, the CPI data are dubious, and real rates are still really miserable. But the direction of travel has, for now, moved against gold investment in favour of the yield offered by fixed income. "We actually began to reduce our position in July of 2012," says Steve Cucchiaro of Windhaven Investment Management – previously the 8th largest holder of shares in the SPDR Gold Trust fund (ticker: GLD), but no more, as he explained to CNBC on Thursday.

Cucchiaro says what led him to cut his fund's position from 13% of its $17 billion total was investor behavior, pointing to a growing appetite for short-selling by traders thanks to disappointment with gold's lack of new highs. But even though he sees negative real rates as a favorable backdrop from here, "We were maximum overweight gold for most of the last ten years, going back to when Alan Greenspan drove interest rates down below the rate of inflation after the Tech Stock Bubble burst."

Nice timing, and for all the right reasons. But other big-name gold bulls are sticking the course. Those that deign to speak to the media continue to fear inflation risks ahead, spurred of course by central banks' relentless pursuit of ever-lower real interest rates. Thanks to the lack of inflation, however, those real rates have been rising.

Put another way, there's not enough inflation writes Paul Krugman of the US economy in the New York Times. The Bank of England also shows "a worrying lack of appetite for trying to get a decent economic recovery going," according to the less-partisan Vicky Redwood at Capital Economics, writing in City AM. UK chancellor George Osborne wants to see more "monetary activism" too. On top of the central bank already creating and spending enough money to swallow one-third of the UK's national debt.

Quantitative easing and zero interest rates haven't worked, in short. So more is needed, everyone says, pointing to the Abenomics miracle now adding 175 points to the Nikkei stock average for every 1¢ the Yen loses against the Dollar.

Today's inflationists might just get what they want one day. Today's gold bears might yet come to regret selling, let alone short-selling, their inflation insurance.