END_OF_DOCUMENT_TOKEN_TO_BE_REPLACED

So NEGATIVE INTEREST RATES are the latest balloon floated by the Bank of England, writes Adrian Ash at BullionVault.

That's an inflation balloon of course – just like the hot-air balloon featured in the Old Lady's sweet little game for kids on its website. Pushing the down button on your PC "fires up the burner," says the Bank in its instructions. "This puts hot air into the balloon, just like cutting Bank Rate puts more money into the economy."

Fire up the burner and the balloon inflates, rising higher. Fail to create inflation, and you crash into the ground. So, ready to play? Let's really get moving, says deputy governor (and former governor-in-waiting until the Libor scandal blew up) Paul Tucker, by making interest rates negative.

"Bizarre," says the BBC. "Extraordinary," gasps The Telegraph, repeating Tucker himself. "But all too common," sigh UK savers and pensioners. 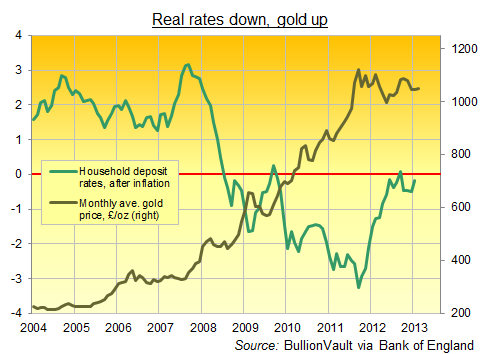 "Negative interest rates...is an idea I have raised [at the policy committee]," said Paul Tucker to the Parliamentary Treasury Committee on Tuesday.

"I hope we will think," he managed to say between the chairman's interruptions, "about whether there are constraints to setting negative interest rates."

But if you view interest rates in the only way that matters – after accounting for inflation – there have been few constraints so far. By summer 2011 in fact, when the ultimate anti-cash known as gold hit record highs amid Eurozone meltdown and US debt downgrade, real UK interest rates were more negative than any time since the late 1970s.

See BullionVault's chart above, however. Real rates on household time-deposit accounts have crept higher, very nearly nudging zero for the fourth time since mid-2008. So yes, Tucker's negative-rate balloon is apparently floating towards commercial banks, who may be "forced to lend" if the Bank of England pays them less-than-zero on the reserves they hold with it. But his timing is telling, we think.

Because with UK government debt prices falling, and government interest rates therefore rising, the near-zero rates of the last five years are no longer enough. The UK just lost its triple-A credit rating, and 10-year gilt yields just bumped their highest level in a year. Hell, even household cash savers very nearly stand on the cusp of not losing real spending power today.

Hence the flattening of gold prices, perhaps. (Gold is, after all, what people buy when cash in the bank becomes a wasting asset.) Hence also Paul Tucker's bizarre, extraordinary and all-too obvious negative interest-rate plan.