END_OF_DOCUMENT_TOKEN_TO_BE_REPLACED

Whatever shall we do with those people deprived of work by wealth and technology...?

HOW TO FILL the days, hours and minutes? wonders Adrian Ash at BullionVault.

It's now eight decades since John Maynard Keynes peered into the future and declared that, one day, trying to scratch a living would cease being "the permanent problem of mankind."

On the contrary, the Brylcreem'd baron said in 1930; the problem ahead was that people would have too much leisure, too much free time, and not enough to do.

Keynes was bang on of course, as ever. His vision, detailed in Economic Possibilities for Our Grandchildren, has in fact come to pass 30 years early, despite those very wars and conflicts he thought would impair it. By 2030, and "for the first time since his creation" Keynes wrote, "man will be faced with his real...prob¬lem – how to use his freedom from pressing economic cares, how to occupy the leisure, which science and compound interest will have won for him, to live wisely and agreeably and well."

"Shoppers on a North Tyneside high street [in the UK] could be forgiven for thinking that a new business has moved into an empty retail unit in the town," says the local council.

"The vacant Select store in Whitley Road, Whitley Bay is the first [empty shop] to benefit with a design treatment that gives the impression of a high quality delicatessen..." 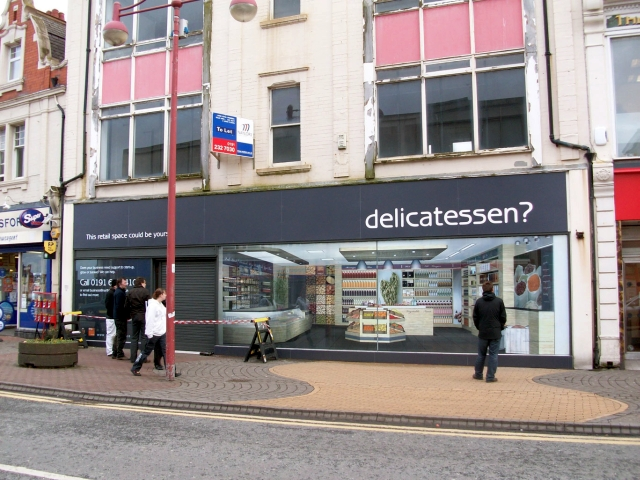 Yes, the United Kingdom – seat of the industrial revolution – is now so advanced, so highly developed, it doesn't even need real shops anymore.

Welcome to the Potemkin High Street. The mere illusion of commerce will do. How's that for a Keynesian possibility...?

"The economic climate has forced many businesses to bring down the shutters. We need to ensure that...our high streets look attractive to both shoppers and potential business investors," says Judith Wallace, the town council's deputy mayor. "The colourful graphic designs – which can feature a whole range of different shop types – are either taped inside the windows or screwed to the fascia so they can be removed and re-used as required," gushes the council on its jolly little website.

Whitley Road's fake-shop was just one of 60 announcements North Tyneside's government press team have put out in the last four weeks. Three press releases per day might seem a bit much for the local population of 191,000. But you've got to keep people busy, right? Otherwise, "Must we not expect a general 'nervous breakdown'?" as Keynes asked back in 1930.

"We already have a little experience of what I mean – a nervous breakdown of the sort which is already common enough in England and the United States amongst the wives of the well-¬to do classes – unfortunate women, many of them...who cannot find it sufficiently amusing, when de¬prived of the spur of economic necessity, to cook and clean and mend, yet are quite unable to find anything more amusing."

Just how has mankind (and his bored, unfortunate wife) attained this evolutionary step change three decades ahead of schedule? Besides assembly-line production and labor-saving devices, Keynes thought the lower orders would be "deprived of their traditional tasks and occupation by their wealth." But not quite. Hardly the wealthiest people in Britain today, even the long-term unemployed enjoy "conveniences, comforts, and amenities beyond the compass of the richest and most powerful monarchs of other ages" (as Keynes once wrote of London's upper-classes on the eve of WWI). Yet it is other people's wealth, not their own – plus two billion low-cost workers quitting communism since 1989, of course – that has freed what used to be called Britain's "working class" from work.

As in the West Midlands, cradle of the industrial revolution and thus another early entrant to Keynes' brave "Post Employment" future, unemployment amongst the north-east's ex-coal-mining population has risen to 9.8% according to the latest official data. Yet a further one-in-four people of working age on Tyneside has opted out of the jobs market entirely. Whether through choice or not (national data says only 7% of the eight million souls deemed economically inactive have taken early retirement), the welfare state – built in Keynes' name after the Great Depression led to a second Great War – promises to feed, clothe and house people, whatever comes. So it's little wonder that, according to one analysis, more than two-thirds of north-east England's economy came from state spending last year, up from 59% in 2004. Nationwide, the total jobless figure has now risen to 27%, just below the historic peaks of the mid-80s, but only because the public-sector payroll has risen by 950,000 since the current administration came to power a little over a decade ago. Take away those jobs, and the horrific worklessness of 25 years ago would be back, but without the hope of falling inflation and interest rates, plus de-regulation and broadening free trade, to reduce it.

"If the gross domestic product of the entire world were distributed evenly, each of the world's inhabitants would have more than enough to bring everyone out of poverty," notes Nobel-winning Joseph Stiglitz, writing one of several essays recently published to commemorate and examine Keynes' Economic Possibilities. The reason so many of us are working more hours than ever before, he guesses, is that financial rewards have been spread out unevenly. "Keynes ignored distributional issues, and failed to appreciate the extent to which global inequity would increase in the second half of the twentieth century," as a review in the Times Literary Supplement puts it.

But what Keynes' economic model didn't miss, however – or at least, what the constant intervention built on his theories guarantees until the money runs out – is the chance to nip here and give away there...putting up a shop-front of busy-busy bees, just like Whitley Road's fake delicatessen.

A keen eugenicist, Keynes once shocked his upper-class chums by demanding assisted suicide for bond holders...the "euthanasia of the rentier" in his phrase...so that taxes didn't go on repayments, and savings could be more wisely spent by clever chaps such as himself.

How long before some new wit, faced with the economic impossibility of the West's post-work society, suggests the same for the lower orders instead...?

Keynes called Gold Bullion a "barbarous relic". If you'd like a little in your portfolio, make it simple, secure and cost-effective...owning it offshore in Zurich, Switzerland for as little as $4 per month...by using BullionVault...