END_OF_DOCUMENT_TOKEN_TO_BE_REPLACED

It may or may not be coincidence that the G20 summit, which ended today, saw discussion about boosting global liquidity by the use of Magic Money – otherwise known as the IMF's Special Drawing Rights.

Italy needs a miracle. Its debt dynamics are truly horrible. Take a look, for example, at the recent spike in 12-Month Treasury Bill yields – which are now at pre-crisis levels (i.e. before central banks started putting unprecedented downwards pressure on interest rates): 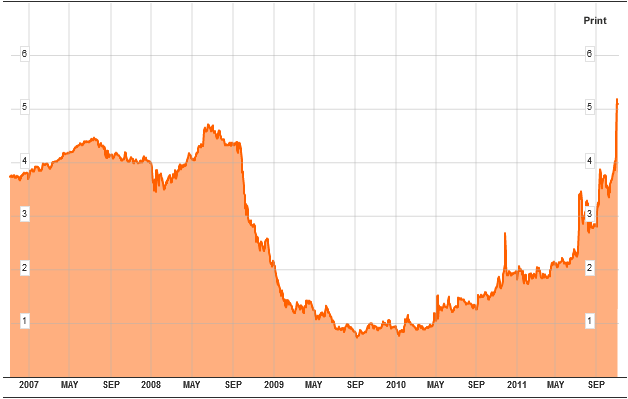 There are rumors that the spike in T-Bill yields last week was a result of a large MF Global position being unwound as the brokerage went bust. That may go some way toward explaining the timing of the spike, but there are good reasons for investors to shy away from short-term Italian debt – and they go beyond the scary headlines we're seeing every day.

Back in July, Italy's Ministry of Economy and Finance made an intriguing move. It cancelled an auction of medium- and longer-dated bonds scheduled for the following month. From now on, it said it would regularly offer 12-month Treasury Bills instead.

According to its Treasury Department, Italy has over €280 billion of debt redemptions coming due over the next 12 months (including this month's debt). That's almost two-thirds of an (unleveraged) EFSF. More than half of this debt is due by the end of March next year.

The average maturity on Italian sovereign debt is around seven years – not too but, but not too great either. Furthermore, as we've seen, Italy plans to issue a lot of new short-term debt – at a time when yields on newly-auctioned debt are hitting Euro-era highs. It won't be long before higher borrowing costs make it impossible for Italy to service its debt.

Small wonder then that the debt markets are taking a long hard look at Italy's debt dynamics. There seems little prospect – short of intervention – that borrowing costs on new Italian debt will fall significantly any time soon.

The European Central Bank is already buying Italian debt on the open market. Will it go that step further and buy it at source – in effect printing money to cover Italy's borrowings and running costs?

Without wishing to put too much emphasis on nationality, it may prove significant that an Italian is now president of the ECB. Mario Draghi has been director general of Italy's Treasury and governor of its central bank.

Weighed against that is that government debt monetization is anathema to the ECB – and what's more, it's prohibited from doing it.

Article 104 of the Treaty on European Union, for example, says this:

Overdraft facilities or any other type of credit facility with the ECB or with the central banks of the Member States (hereinafter referred to as "national central banks") in favour of Community institutions or bodies, central governments, regional, local or other public authorities, other bodies governed by public law, or public undertakings of Member States shall be prohibited, as shall the purchase directly from them by the ECB or national central banks of debt instruments.

Where there's a European will, though, there's usually a way. Some sort of convoluted arrangement involving the EFSF (or its planned successor, the ESM) perhaps.

An ECB-fuelled solution has seemed a likely endgame for a while now (though there is now the tantalizing prospect of SDRs too). Italy's dire debt problems suggest it may be closer than some people realize.