END_OF_DOCUMENT_TOKEN_TO_BE_REPLACED

If central banks don't target consumer price inflation, just why would they exist...?

JUST WHAT ARE central banks for exactly?

"Setting interest rates," most folk would guess, not daring to wonder why the world might need unelected egg-heads to fix the price of money each month.

But central bankers themselves? This highly academic breed would claim a simple, even noble, intention – just trying to keep everything steady and stable. Boring, in fact.

Forget about the roots of central banking, back when early debt-funded states such as Holland and the United Kingdom needed a pocket banker to arrange the sale of government bonds. Put aside any tom-fool notions you may have about central bankers leading a pan-global cabal secretly working to suppress the Gold Price, as well. Because "[since the late '70s], the commitment to price stability as the primary goal for monetary policy has been spreading throughout the world," as Frederic Mishkin of Columbia Business School and Adam Posen of the Peterson Institute for International Economics wrote back in 1997.

"An inflation target clearly has the important advantage of being easily understood by the public. The resulting transparency increases the potential for promoting low inflation expectations."

Summarizing the world's early experiments with inflation targeting as "no panacea [but] highly successful in helping...maintain low inflation rates," Posen and Mishkin – who just quit, apparently amiably, as one of Ben Bernanke's team at the Fed – clearly liked the idea. They knew Joe Public would go for it, too.


If the world must pay gray men in gray suits to decide the price of overnight loans, then shooting for low inflation (or rather, strong money) would seem a good target to set. What better than raising rates, and crimping new credit, every time inflation starts gobbling up the value of savings and income?

Soon followed by the United Kingdom, the 15-nation Eurozone, South Africa, Australia, and the United States – albeit behind closed doors at the Fed – the government of New Zealand led the way in 1990, ordering the Reserve Bank to start targeting anything between 1% and 3% growth in the Consumer Price Index (CPI) year-on-year.

The next year saw Canada join the fun, telling the Bank of Canada to adopt the same target but apply it less strictly. The Canadian government also added the mid-point – two per cent inflation per year – as the sweet spot most desired.

Okay, so two per cent annual inflation will destroy one-third of your spending power inside 21 years. But a little stick to go with the carrot of, say, tax-free retirement accounts never hurt anyone, right?

And on the official evidence at least, these Kiwi and Canadian trail-blazers of stability have got something like boredom in return. 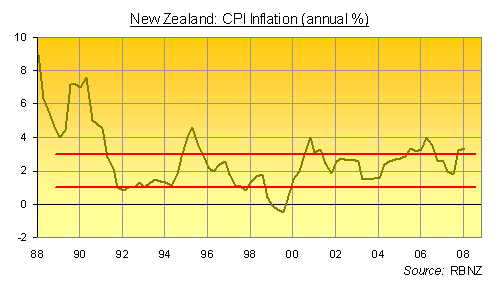 Annual price changes for New Zealand consumers have slipped outside the RBNZ's target range only five times in the last 17 years.

Yes, the Bank of Canada's inflationary outcomes (as central bankers like to call plain old "inflation") have suffered greater volatility. But Canada's monthly average since Jan. 1995 sits almost bang on that target mid-point of 2.0% inflation per year.

Central bankers should target Consumer Price growth – and make that target explicit – if they want consumers and business to know what to expect (i.e. higher borrowing costs) if their wage demands and price hikes run ahead of current inflation.

Well...no. Not in a world facing the first US recession in seven years and the first multi-national slowdown in growth since 1992.

"Today inflation targeting is being put to the test – and it will almost certainly fail," says Joseph Stiglitz, the best-selling author, Columbia professor and Nobel laureate. He calls inflation targeting a "fad...a new religion", and urges "both developing and developed countries" to abandon it quick smart before it leads them to "disaster".

Here in London, inflation on the CPI measure is running one-half ahead of the Bank of England's target – meaning "the [UK] consumer will have to be crucified in order to meet the inflation target as it stands at the moment," according to Peter Spencer, head of the highly influential ITEM Club consultancy.

"The government could make an active choice about the inflation/growth trade-off and raise its inflation target for the next couple of years," Spencer said in mid-May.

Across the Channel and eastwards again in Frankfurt, the European Central Bank (ECB) has missed its 2.0% target for the last eight years running. It would only enjoy "a pyrrhic victory by pushing inflation within target but having destroyed the real economy," warns Thomas Mayer, chief economist at Deutsche Bank.

And in Washington, where the Federal Reserve is suspected of also targeting 2.0% growth in consumer prices – but without an explicit mandate from Congress – "Ben Bernanke came into office determined to establish an official inflation target at the Fed reckons David Jones, a former economist at the US central bank.

"But he's completely given up on the idea."

How else could Bernanke justify slashing the Fed funds rate in the teeth of 4% annual growth in the Consumer Price Index? Whatever rate of inflation the Fed might prefer to target – and let's hope it's not the current 4% per year...enough to turn $100 today into less than $50 of spending power by 2026 – cutting the price of money so sharply signals surrender if not a whole change of allegiance.

Why give in so quickly? "Most countries today face imported inflation," said Joe Stiglitz on Australian radio last week. "To think that there is anything Australia can do to dampen global food inflation or global energy inflation is absolutely absurd."

Peter Spence at the ITEM Club agrees. "What is the sense in asking the [Bank of England] to target...food and energy prices that are set beyond its control in world commodity markets?"

Put another way, "we're not there yet," as former Reserve Bank of Australia governor Bernie Fraser told the Sydney Morning Herald just today, "but the question is going to arise, are some of these increases not seasonal, not episodic, but structural and secular?"

Given the fast-growing consensus outside central banks today – if not behind their closed doors as well – the end of inflation targets may indeed soon arise, as Fraser predicts. And doing away with inflation targets would indeed make the upturn in prices now hitting consumers and business worldwide truly "structural" too.

"It's easy to say why not raise the target," said Glenn Stevens, the current RBA governor – and Fraser's successor – at a dinner for alumni of the University of Sydney last month.

If the cost of fighting inflation proves a slowdown in growth, however, it's a policy with few friends today. The growing consensus claims instead that, "like all targets which when set seem like a thoroughly good idea, the inflation target may, at least in its present form, have outlived its usefulness," writes Jeremy Warner in The Independent in London.

Witness the 1960s, when Western governments attempted to target the trade-off between inflation and employment cited by the so-called Phillips Curve. That experiment ended with double-digit inflation and record post-war jobless rates.

So central banks switched to targeting the money supply instead, measuring and trying to control the rate of expansion in different "aggregates" of how much cash and credit flowed around the economy. Based on clear empirical evidence, this strategy soon faded however. Not even the German Bundesbank could sell the idea as it targets kept slipping.

And if the Germans can't do it, the idea must be wrong-headed!

But inflation targeting, in contrast, stands apart. Because central bankers – in the popular imagination, if not also in fact – hold scant reason for working today if they're not trying to keep a lid on inflation. That's why Paul Volcker still casts his tall shadow across the Federal Reserve almost thirty years on.

Keeping prices in check, if you believe it requires a bureaucrat's meddling, starts with keeping interest rates above the rate of inflation – far above inflation if higher costs get chance to become "structural" as they did in the 1970s, built into every household and business decision.

Otherwise, the future value of money is discounted to fall. Which means precisely future inflation, baked right there in the cake. Which is why more and more private individuals are quietly continuing to Buy Gold.

Because if central bankers won't defend your wealth, with or without inflation targets, then perhaps a lump or rare, scarce and indestructible metal...used to store value for 5,000 years...will have to do the job instead.