END_OF_DOCUMENT_TOKEN_TO_BE_REPLACED

Counting the quacks of quantitative easing...

IN THE MEDICAL WORLD, writes Adrian Ash at BullionVault, "Doctors administer so much care that they wouldn't want for themselves," confesses a US physician, breaking the taboo about not wanting to be treated like his profession treats the rest of us in what would otherwise be our dying moments.

"Much of the care we offer patients who have serious, life-threatening illnesses is ultimately futile," adds a British doctor, also wanting to avoid his colleague's best efforts when his time comes. Pointing to chemotherapy in particular, "It can involve many months of gruelling treatments that might possibly extend the length of one's life, but do nothing for its quality."

How different is economics? "Treating serious medical conditions often has unwanted side effects," declared Charles Bean, deputy governor of the Bank of England and a PhD doctor, in a speech in Glasgow on Tuesday.

"But unpleasant as those side effects sometimes are, treatment is invariably better than the alternative. So it is with the economic medicine of low interest rates and quantitative easing."

A former LSE and Stanford professor, Bean was tackling the sensitive topic of sub-zero real interest rates, and how they hurt savers and pensioners. Negative real rates are when retained capital loses real purchasing power, because the interest or yield that it earns lags the rate of inflation. Quantitative easing has only left savers and pensioners more battered and bruised still, said Bean.

"The immediate consequences may be unpalatable, but the sooner we can get the economy on the mend, the sooner we can return policy to more normal settings and the better it will be for all of us – savers, businesses and employees alike."

There, there. Now do hold still...

"[Savers] have every right to feel aggrieved at losing out," the doctor continued. "After all, they did nothing to cause the financial crisis. But neither did most of those in work, who have also seen a substantial squeeze in their real incomes."

How true! And since neither workers nor savers are to blame for this crisis, they can both pay – and pay dearly – by being fed another dose of kill-or-cure medicine which has yet to work in 3 years of treatment... 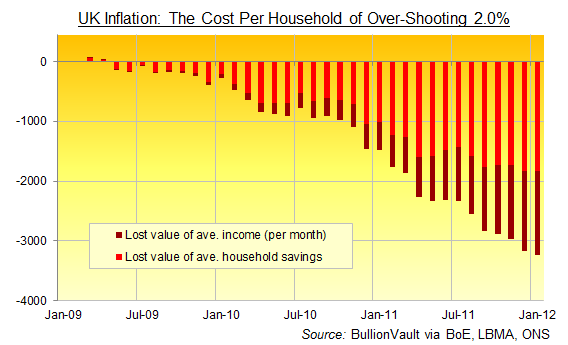 Defending the course of quantitative easing and near-zero rates now prescribed is a thankless task. First, it's done nothing to cure the depression to date. Second, it's actually adding to the gloom – as Dr.Bean's boss, the Bank's governor Mervyn King 'fessed up last autumn. In a very roundabout way, you understand.

"I would certainly accept that what is happening in the economy now is a very large squeeze on household incomes," Dr.King told the UK's Treasury Select Committee. "Real take-home pay has fallen by more in the past two years than any time in living memory."

The squeeze on real wages shows in our chart above. Gross pay has risen much less quickly than inflation, which has raced ahead at almost twice the pace of the Bank of England's official 2.0% annual target. By February 2012, and three years after it started, the avowed aim of quantitative easing – of boosting inflation, to insure against the fat chance of it ever falling below target – had cost the average wage-earner £1410 in spending power.

That's the cumulative gap between what wage-earners actually made, adjusted for inflation, and what they would have made if the Bank had indeed hit its 2.0% target. Call it the cost of quantitative easing: £1410 in real spending power. Now add the real loss imposed on bank savings too, and that cost today runs – on average – to £3,241 for every household where one person works. Families with two or more workers are worse off again.

Tell me, does it hurt when I punch you here?

"Now, that [loss in real pay] is not the result of inflation being high. Inflation is the symptom. The causes of that squeeze on living standards are real causes. They are a change in world prices of energy, and the utility prices of gas and electricity. They are the consequences of higher value-added tax, higher food prices, and a consequence of a fall in the real exchange rate, which was necessary for us to be able to rebalance our economy in the way that was vital after a prolonged period of a relatively over-valued exchange rate."

Let's put Dr.King's prognosis in layman's terms, shall we?

Number 3 was of course a fiscal decision, made by the Treasury, not the Bank. But "real causes" 1 and 2...? How did those boils break out?

"Countries with faster growth rates of money experience higher inflation," said a younger, less care-worn Dr.King back when he was deputy, rather than running the clinic. And "it is clear...that the correlation between money growth and inflation is greater the longer is the time horizon over which both are measured."

Quantitative easing appeals to just the same mechanism today. More money means more inflation. Meaning that injections of money are sure to raise the cost of living. They're also sure to depress the currency's exchange rate, especially if the injection goes unsterilized – a disaster in medicine, of course, but very necessary in monetary policy apparently. Because "sterilization" would mean withdrawing the same quantity of money as you inject, by selling bonds to the very same value, thus negating its impact entirely.

Nurse! Wipe this needle on the doormat outside would you?

Reading the Bank of England's notes from its latest consultancy, we guess they really believe that inflation means recovery will follow. Because inflation rarely exists without economic growth, or so runs the logic. Hyperinflationary depressions are the unspoken exception, of course (see Weimar Germany, post-war Austria and Hungary, Argentina time and again, Zimbabwe a decade ago). But we're too clever, too modern, to stand any risk of wheelbarrow money today, just like Victorian banking runs or financial panics cannot happen now. And more money must mean more spending, right? Because if it doesn't, then we'll just keep injecting the patient until he starts spending on something...anything!

"Interest rate less than the inflation rate boosts gambling businesses, on gold and foreign exchange markets," said governor of the Central Bank of Iran, Mahmoud Bahmani, last week. His colleagues in London, Washington and Frankfurt have seen the very same results come back from the lab. Because people Buy Gold when they fear or lose out to inflation. Others trade currencies, and still more find themselves basing all financial decisions – from buying a house, to taking a job or lending to business – on a wild speculation about what the next wild move from the central bank might be.

Unlike Bahmani, the US, UK and Euro authorities refuse to raise rates, but for now the Iranian doctor's got much further to go. Tehran's base rate now stands at 6%. Inflation is running above 21% per year – making for the kind of negative real rate not suffered by Western workers and savers outside mid-1970s Britain. Gold has again helped ease the pain of zero-rate money printing since 2009. Every fresh dose of unsterilized money is likely to indicate a greater dose of gold buying, too. 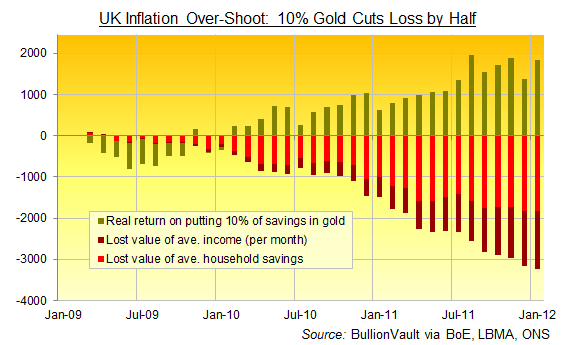 Back in the doctor's surgery, meantime, and let's not forget that the Bank of England's collective PhD brains are savers and workers as well. We are all in this together, remember.

"[Doctors] know enough about modern medicine to know its limits," writes Ken Murray, Clinical Assistant Professor of Family Medicine at the University of Southern California. "And they know enough about death to...want to be sure, when [their own] time comes, that no heroic measures will happen – that they will never experience, during their last moments on earth, someone breaking their ribs in an attempt to resuscitate them with CPR (that's what happens if CPR is done right)."

Done right or wrong, no one's ribs get broken by quantitative easing. But better to be safe than sorry perhaps. Dr.King's own pension pot got a £1.4 million boost ($2.1m) in 2008, a nice antidote to the ever-lower interest rates then being prescribed for savers and retirees by his team. The trustees of the Bank's staff pension scheme then switched pretty much the entire fund out of UK gilts and into inflation-linked government bonds – the best-peforming income-bearing asset under UK stagflation to date – in the 12 months immediately preceding the start of QE in March 2009.

Please do hold still – and tell me if you feel a prick.