END_OF_DOCUMENT_TOKEN_TO_BE_REPLACED

YOU CAN'T REALLY blame financial hacks for getting things so wrong, so often, writes...umm...financial hack Adrian Ash at BullionVault.

Because every financial decision you now make is a speculation on interest rates. And so pretty much every story a financial journalist might choose to write must start and end with the same speculation, built on the inaction of each monthly central-bank vote, and the mass of half-truths and bunkum between.

But journalists could at least try to unpick something like the truth from the sound and fury of Ben Bernanke, Jean-Claude Trichet and the rest. And you might at least hope that senior staff would try to lead by example.

"Are we seeing a whiff of inflation?" asked CNBC's Patti Dom at the start of February. Never mind that the executive editor was squint at an odor. That very day, copper and tin prices had hit fresh all-time highs. The "prices paid" index for US manufacturers had just leapt more than 9% year-on-year on the ISM index. And since the Federal Reserve began talking up Quantitative Easing Part II in mid-July, global food prices stood more than 25% higher on the World Bank's data.

But hey, this worry about inflation is "much abo about nothing," reckons a colleague of Dom's at CNBC, senior features editor Albert Bozzo. Despite the surge in US and European import prices, so clearly led by surging wage- and input-cost inflation in the emerging world – in turn led by the surge in food prices that's sparked civil unrest across the Middle East – "Globalization, much like in the past two decades, is keeping a lid on inflation," claims Bozzo.

No, comic-opera names aren't essential if you're going to play the fool, however. "Bank lays ground for interest rate rises," announced the Financial Times' economics editor, Chris Giles, on Tuesday this week. "The Bank of England said monetary policy would need to be tightened to bring medium-term inflation back on track," the FT's man stated after Bank of England governor Mervyn King wrote an open letter to the government – as he's required – on news that UK inflation in January hit twice the official target of 2.0% per year.

Yet on Wednesday morning, "King denies rate rise certainty" said the headline over Giles' next piece. Because as the governor himself made clear at the press conference announcing the Bank of England's latest Inflation Report, "Some people are running ahead of themselves and saying that we are pre-announcing or laying the ground for a rate rise."

"Some people" would feel embarrassed – chastised even – by the governor's remarks. Yet the Bank's latest Inflation Report, writes Giles at the top of what might otherwise read like a retraction, gives "a verdict likely to reinforce expectations of a gradual rise in rates." 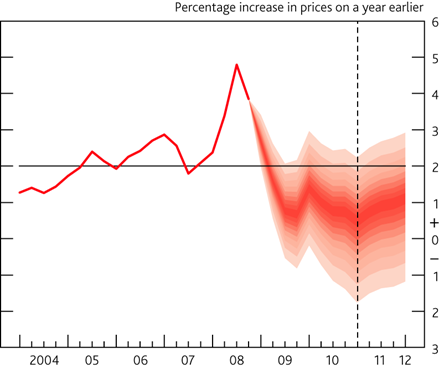 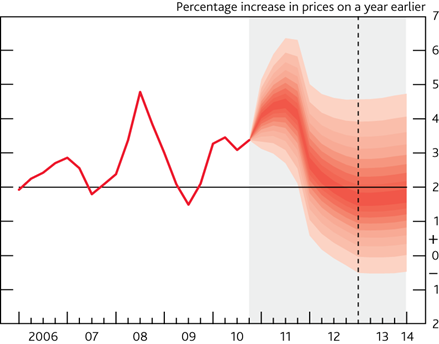 The Bank of England claims to target (and hit) inflation two years hence. And as you can see, back at the start of 2009, the Bank of England's "central forecast" (the deepest reds above) saw UK consumer price inflation slipping towards zero by the end of 2010.

Sadly for fixed-income savers and wage earners alike however, the nearest we got – thanks to Sterling's one-fifth loss on the currency market, engineered by the Bank's very own record-low interest rates – was a measly six months below the official target of 2.0%.

The target is "symmetrical", by the way. Because in theory (and in central-bank cant), the Old Lady is just as concerned about price inflation straying too far above 2.0% per year as she is about it straying too far below. Perhaps that's where the FT's economics editor got the idea that the Bank of England is about to raise rates. Because, if symmetrical targeting were really the aim, as stated, then an aggressive series of rate rises would surely be warranted by inflation running above the upper-tolerance of 3.0% for 13 months in a row.

Hell, the mere idea of inflation slipping below target brought interest rates crashing towards zero! Today's strong and rising inflation – forecast by the Old Lady herself at perhaps 6% or more by this summer – must mean the methadone drip of negative real rates will at least be diluted, right?

"That decision has not been taken and won't be taken until we get to the next meeting or the following meeting," said Dr.King on Wednesday.

"Or it may be many quarters."

Whether knaves or fools, it doesn't matter. The Bank of England has only just got started doing nothing. To date the Bank has held its key lending rate at 0.5% for 24 months running – the longest stretch since it "threw Bank Rate in the bin" for 20 years, as monetary-history professor Glyn Davies put it, after abandoning the Gold Standard in 1931. That was with Bank Rate stuck at 2.0%, when total war took government debt to 240% of economic output, but private household debt was very much smaller. Now public debt-to-GDP has surged again, this time thanks to a war on recession, and household debt stands near twice annual output.

So just as in the United States and across Europe, central bankers aren't merely impotent down here at the "zero bound". Like their predecessors during and after the Great Depression, they have in truth castrated interest rates as a tool of policy. More or less quantitative easing looks the only monthly choice left.

Buy Gold today - get the safest gold at the lowest prices using the award-winning world No.1 online, BullionVault...