END_OF_DOCUMENT_TOKEN_TO_BE_REPLACED

Forgetting the lesson of the 1970s' inflation in the shadow of the '30s depression...

"...Every morning, when you look in the mirror, I want you to think 'What am I going to do today to increase the money supply?'..."
- John Ehrlichman, assistant to Richard Nixon, apparently speaking to Charles Pardee, a Federal Reserve governor, sometime in the early 1970s

SO THAT'S IT then. We're all agreed.

"This is clearly the worst financial problem we've had since the Great Depression," as Joseph Stiglitz told a radio show in New Zealand on Wednesday morning, where he's attending a conference.

The Nobel laureate lined up behind Countrywide Financial (July '07), Wells Fargo (Nov. '07), former Treasury advisor Nouriel Roubini (Dec. '07), the National Association of Homebuilders (March '08) and pretty much everyone else in saying this is as bad as it gets.

As in, well, the worst ever – like finding nothing besides Of Mice & Men to order from Amazon, and nothing but Seabiscuit to rent at Blockbusters.

The men now pulling the Fed's monetary levers sure agree. And while Ben Bernanke might see the shadow of depression where the rest of us glimpse a shade of recession, liquidating the mal-investments of 2002-2007 is certainly hurting.

Imagine the US Treasury paid your wages each month; you'd jump to increase the money supply every chance you got, too. See, it's the only way to stop the Nazis taking over. Or the Commies.

"Involuntary unemployment," as John F.Kennedy put it, way back in 1960, "is the most dramatic sign and disheartening consequence of under-utilization...We cannot afford to settle for any prescribed level of unemployment."

Barely a generation after the worst recession in US history, backing labor over capital like this – and thereby nabbing labor's far weightier vote – meant JFK got to kick Richard Nixon around at the ballot box.

When his turn at the top finally came round at the end of the '60s, Tricky Dicky didn't forget the kicking. In fact, "I [already] knew from bitter experience how, in both 1954 and 1958, slumps which hit bottom early in October contributed to substantial Republican losses in the House and Senate," as Nixon himself wrote in 1962.

So come December of 1968, when Herbert Stein first met with Nixon as head of his Council of Economic Advisors – and he asked Stein to name the biggest problem they faced – "I started with inflation," said the economist.

"[Nixon] agreed, but immediately warned me that we must not raise unemployment," Stein was to recall nearly 15 years later. "I didn't at the time realize how deep this feeling was or how serious its implications would be..."

Fast forward to the brink of Easter '08, and the "serious implication" of the Great Depression once again today is the cost of not acting to prevent it. Or so everyone says.

And I mean everyone...

"The Liquidationists turned the 1930 recession into a slump," says Ambrose Evans-Pritchard for The Daily Telegraph here in London. "They insisted with Puritan zeal – or malice – that speculators should be driven to the wall amid a cathartic purge of the Roaring Twenties.

"Among them were top bureaucrats at the US Federal Reserve and some of Europe's central banks. The consequence was the Brüning deflation in Germany, ushering in the Nazis. Democracies snapped across half of Europe. If it had not been for the towering figure of Franklin Roosevelt, America might have splintered into a bedlam of Prairie populists, Coughlan Fascists and Huey Long extremism."

Better anything – even a bail-out of Wall Street's hated bankers today – than jack-boots and Benzedrine addicts with Chaplin moustaches, right? And where better to start in getting the voters on-side than with Ben Bernanke's complete collection of The Waltons, series 1 to 9, on DVD...? 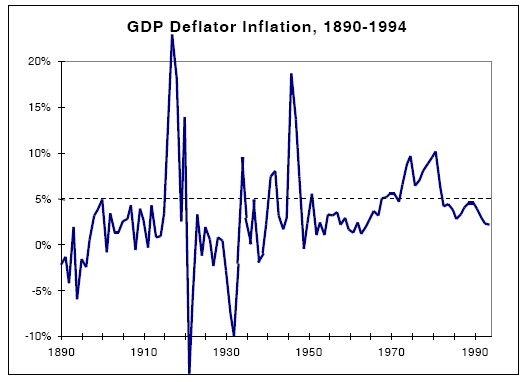 "During the major contraction phase of the Depression, between 1929 and 1933," as Bernanke said in a speech of 2004, "real output in the United States fell nearly 30%.

"During the same period, according to retrospective studies, the unemployment rate rose from about 3% to nearly 25%, and many of those lucky enough to have a job were able to work only part-time."

By comparison, the 1973-75 recession – "perhaps the most severe US recession of the World War II era," according to Ben "John Boy" Bernanke – real output fell 3.4% and the unemployment rate merely doubled from 4% to 9%.

So never mind about the double-digit inflation. Never mind that by the end of the '70s, "every business decision [had become] a speculation on monetary policy," as J.Bradford De Long put it in a 1995 essay (from which we're quoting liberally, by the way). Never mind that business can't function if money becomes a flickering variable, making the trade-off between inflation and jobs...bail-outs and growth...a loser both ways.

"Other features of the 1929-33 decline included a sharp deflation," Bernanke went on in his speech, soup-ladle in hand and a Baker Newsboy flat cap on his head. "Prices fell at a rate of nearly 10% per year during the early 1930s – as well as a plummeting stock market, widespread bank failures, and a rash of defaults and bankruptcies by businesses and households."

So no matter the cost, deflation must be defeated long before it arrives. Indeed, the higher the cost, the better!

"In 1938, the Congress enacted the Fair Labor Standards Act," writes David Hackett Fischer in The Great Wave – his sweeping review of history's longest inflations – "which set the first national minimum wage. It also briefly considered a maximum wage, but that idea was quickly forgotten."

Over the next 30 years, this upwards bias in wages – all floor and no ceiling – was "built into the American economy," Hackett Fisher goes on. "Floors under wages, pensions, and compensation for the unemployed; floors beneath farm prices, steel prices, liquor prices, and milk prices; floors for airline fares, trucking charges, doctors' bills, and lawyers' fees..."

Come Nixon's first term, the high cost of living was mandated by government, corporations, unions and householders alike. Falling prices could not be allowed ("You remember the '30s, don't you?") and – as yet – rising prices were no more than a puzzler at the grocery store every Saturday morning.

Convinced by economists of a trade-off between rising prices and jobs, governments everywhere watered and tended inflation, thinking they could always prune it if the foliage got out of control. And feeding its roots, deep below ground, was the rich, manure mulch of the Great '30s Depression.

"At the surface level," De Long explains, the destruction of money during the '70s happened because no one in power "placed a high enough priority on stopping inflation." Worse than that, Nixon and his successors – Ford and then Carter – inherited "painful dilemmas with no attractive choices". The '60s battle to grow jobs at the expense of sound money had already locked in that problem.

Look deeper again, and "no one had a mandate to do what was necessary," our Berkeley professor goes on. "It took the entire decade for the Federal Reserve as an institution to gain the power and freedom of action necessary to control inflation."

But at the very deepest level, "the truest cause of the 1970s inflation was the shadow cast by the Great Depression," De Long concludes. "It took the 1970s to persuade economists, and policy makers, that 'frictional' and 'structural' unemployment were far more than one to two per cent of the labor force. It took the 1970s to convince [them] that the political costs of even high single-digit inflation were very high."

In short, the developed world balked at the chance to "Liquidate labor, liquidate stocks, liquidate the farmers, liquidate real estate" – as US Treasury secretary Andrew Mellon had urged in the '30s – when the liquidation wouldn't have washed so deep or so hard at the start of the '70s.

Scared by the ghost of a Greater Depression instead, the West pushed ahead with big budget deficits, negative real interest rates, and a destruction of money that almost bankrupted Treasury-bond holders. The runaway inflation that failed to back off when Richard Nixon nudged the Fed about defending jobs before the Dollar (for what else is "inflation" if not a loss of purchasing power?) proved a hard-won lesson all told.

Reaching double-digits across the developed world, and causing a flight into commodities that in turn led to a huge bubble of mal-investments in the early 1980s, the "sustained spurt" of '70s inflation equaled the worst war-time price increases by the time double-digit interest rates could be used – with broad voter approval – to kill it off.

It all ended – guess what! – with a forced liquidation at the start of the '80s.

"Ben Bernanke is smarter than I am and thinks about this 24/7 which I do not," says Bradford De Long on his blog this week. "He leads a superb committee. He is backed by the best monetary policy technical economic staff on the world. If I disagree with Ben's FOMC on an issue of monetary policy, I am probably wrong."

Either that, or Bernanke's still stuck on Walton Mountain nostalgia...just like TV audiences were back in the '70s.