END_OF_DOCUMENT_TOKEN_TO_BE_REPLACED

"I have hedge fund managers literally in tears on the phone..."

ODD THINGS were happening to the price of Volkswagen – the world's third-largest auto-maker – long before it leapt 187% higher inside two days at the end of October. For a brief moment, and amid the worst-ever stock market rout in history, VW became the planet's most highly-valued corporation bar none at the end of October.

Yet it was already worth more than all other European and US car-makers combined. And VW's stock hadn't fallen but risen during 2008 to date – an odd move for the "people's car" marque.

Like everyone else, after all, VW is facing a global recession. Its peers, in contrast, have either collapsed or drifted lower, led by the 90% rout in GM shares. So betting that VW would also fall in due course thus looked a safe bet. So safe, in fact, you might wonder why wealthy investors and large institutions would bother paying a hedge fund to take that bet for them.

Maybe it's the "prime broker" access to exotic markets offshore...enabling bearish US investors to profit even after short-selling in GM and Ford was banned this September. Or perhaps it's the uniform that draws in the punters – you know, the bepoke lounge suit, open-necked cashmerello shirt, thickly fudged hair and (for extra "bite me!" pizazz) a pair of kooky nerd glasses.

Because it surely can't be the fees...starting, or so legend has it, at 2% flat plus 20% of any gains you might make. And legend might be all that remains of the bubble in hedge funds by the time the global meltdown in finance is finished.

We'll get round to that in Part II. Because back in VW's stock, fresh madness showed up in mid-September, starting with a series of short, sharp jerks higher. VW's stock doubled in price – and doubled on wildly erratic volume – even as Chinese car sales were reported one-tenth lower for August. SUV sales in the US sank by one-half from the same time last year.

Oh sure, the price of VW then fell (and fell hard), but only back to a two-month low of €200. And then, for all those hedge funds waiting to make a killing when reality bit, came the gotterdämmerung in Frankfurt's Xetra Dax market... 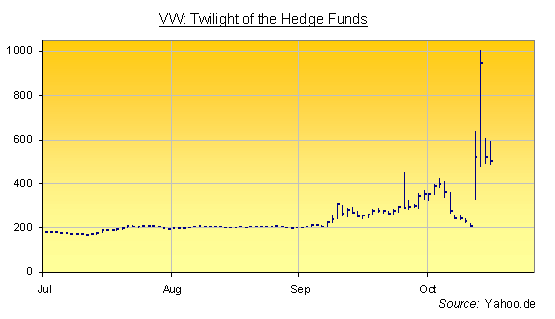 That not only caught bearish hedge funds napping. It also took Porsche's holding to a massive 74.1% of all shares in issue. And so with the Germany state of Lower Saxony holding a further twenty per cent (the car maker's main operations are based there in Wolfsburg), the VW bears were left scrambling to buy back their shorts.

The pool of stock available outside Porsche and Saxony's investment, however, is now less than half the size needed. Oh...bother!

"I have hedge fund managers literally in tears on the phone," said one London broker to the financial press. The host of BBC's Today program couldn't stifle his mirth. Even the Financial Times – an essential prop for any "wild cat" hedge fund setting up shop amid the last decade's bubble in credit and leverage – got in a dig:

"Porsche used to be the emblem of a go-go City trader. Now it has become one," guffawed the Lex column before the true craziness broke. "Fast cars and fast money make a terrible combination."

Hedge funds get stuffed? What a hoot! Never mind that your retirement plan, perhaps, lies amongst the casualties. UK pension funds raised their allocation to these go-go managers by more than 60% in 2007. The Japan Pension Fund Association raised its allocation to hedge funds six times over in the year to July '08.

But what's not to love about the headline "Hedge funds lose (over-priced) shirt"...? "About 13% of VW's shares were lent out for short-selling, the highest proportion among large German companies," explains the FT. The free float of shares not held by Porsche or Lower Saxony, on the other hand, stands at just 5.8%. Hence the rush to buy stock to cover those shorts. Hence Tuesday's spike to €1005 per share...precisely five times last Friday's low...in the "greatest short squeeze in history" as one analyst called it.

For a 5% or merely 2% flat-fee per year, you might at least expect your hedge-fund manager to look askance at VW's odd behavior going into October's record jump. Porsche already held 35% of the stock; Saxony clearly plans to stick with its 20.1% for time immemorial. What's more, Germany's classically European regulations meant Porsche was known to have options...but didn't have to declare their size.

Plainly something odd was happening...something only the foolhardy or idiotic would want to meddle with. So step forward the German investment regulator, Bafin, who now finds the VW trade already jammed tight with fools and idiots.

More than 100 hedge funds are reckoned to have applied their brains to this "no brainer" bet, says the FT – funds including big names like Greenlight Capital, Glenview Capital, Marshall Wace, Tiger Asia, Perry Capital and Highside Capital according to the Wall Street Journal, plus one of the UK's longest-standing hedge funds, Odey Asset Management...as well as the world's most expensive manager, SAC Capital.

SAC doesn't waste time charging not 2-and-20 (as the more standard charge of 2% flat plus 20% of gains is known), but a massive 5-and-50. Or so legend has it. Again, legend might soon be all that remains.

Roughly put, VW's short squeeze may have cost the bears high €30 billon ($38bn). It "will leave no winners" as one loser puts it. And the great deleveraging ain't finished yet out there in Mayfair and Connecticut...out where the "wild cats" howled all through the greatest bubble in credit yet seen.

Had enough yet? Read Part II – and learn what makes The Ideal Hedge Fund Manager – here...