END_OF_DOCUMENT_TOKEN_TO_BE_REPLACED

"EVER WONDERED WHY your family budgets never seem to work out as planned?" asked Harry Browne in his 1970 best-seller, How You Can Profit from the Coming Devaluation.

The hardback edition sold more than 100,000 copies according to the blurb on the 1971 paperback a reader kindly sent when I ran The Daily Reckoning's desk, here in London, three decades later.

"You guys...you're just saying the same as Harry Browne did 30 years ago! What's new?" he wrote in an email. And on first reading, Harry Browne's book confirmed the jibe.

On re-reading it on the Tube between Waterloo and Hammersmith this week, the cold fact stands out colder still.

"In the short run," wrote Browne – an long-time investment advisor, newsletter writer, and US presidential candidate for the Libertarian Party – "inflation seems to be producing a 'boom'. Prosperity appears to hit the economy when the government pumps new inflationary money into circulation...

"The so-called gains from inflation are always spectacular, while the losses are generally hidden from view...But the truth was that nothing had actually changed. We still had the same amount of resources to work with; we still had the same general level of technical competence. Inflation deceived us into redistributing our resources temporarily towards more glamorous industries."

What's wrong with that? Demand for granite countertops grew some 15% per year – worldwide – between 2000 and 2006, according to Dimension Stone Advocate News. More glamorous still, demand for marble rose by 12% annually.

Come Sept. 2007, research from the Freedonia group (costing $4,500 for the full report) said sales of kitchen and bathroom countertops in the United States alone would rise to 540 million square feet by 2011. That would fetch some $14 billion for "natural and engineered stone" manufacturers in Italy, Spain, China and Brazil.

Okay, so nobody's food got any tastier simply because they chopped onions on new marble plinths. And we all ate fewer meals at home anyway. By August '06, consumers in Britain were spending more on dining out than they spent on eating at home; across the Atlantic, the restaurant and fast-food business employs 13 million staff – one in 12 of the workforce!

But what's not to love about a little glamour each day?

"Let's take a hypothetical engineer," wrote Harry Browne back in 1970, "working in an aerospace company...One day his boss calls him into his office to tell him some good news. 'Bumstead,' he says, 'the company has just received a new government contract. That means we can now give you a raise. Your take-home pay is going up by $100 per month.'

"[Bumstead] rushes home, tells his wife, and they spend all of four minutes deciding what to do with the raise. They rush out and buy a swimming pool, probably by obligating themselves for the $100 per month the new raise is bringing him."

Here in the 21st century – where $100 won't even buy a tank-full of gas in the US, let alone here in the UK – the total number of swimming pools in US homes now stands around 8.6 million on one industry estimate. The pool maintenance and equipment market, having grown by 8% per year since 2002, approached annual sales of $3 billion in 2006.

"There's only one problem," as Browne noted. "Prices are rushing upward to meet the increased paper money supply caused by inflation – the same inflation that deceived Bumstead into thinking he'd received a raise."

That's why, just as in 1970, "April personal spending up as expected," reports Reuters today. The Commerce Department said US consumers spent 0.2% more last month than they did in March. But after adjusting for higher prices, however, real consumer spending was unchanged – despite the impending arrival of Economic Stimulus checks, set to total $106.7 billion for 2008 as a whole. 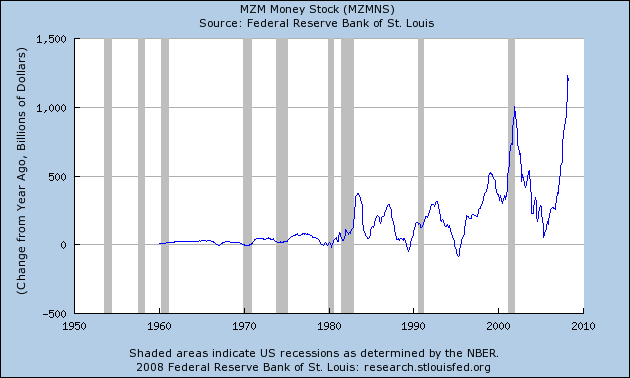 "Of course, what's happening to our hero," Browne went on, "is also happening to millions of others, in various positions along the handout line. Businessmen are gearing up to these new demands – swimming pools, expensive restaurants, better cars, etc.

"But as soon as the inflationary currency has made one complete pass through the market, prices will begin to stabilize at a new, higher level. That's the point where consumers realize that something has gone wrong with their calculations."

Buying a swimming on instalment, in short, starts to look very expensive. Because it costs more – in terms of poor Bumstead's outgoings – than simply the new raise he brings home each month. Now he and the family must adjust their spending on all those other things (such as food, clothes, entertainment, meals out) which they'd previously enjoyed regardless.

"The key number here is real spending, which has now been more or less flat since January," said one talking head in response to this week's personal income and expenditure numbers. "With credit tightening, cash flow being squeezed and confidence near-record lows, this will surely continue."

So, no – in short – there really is nothing new in the world of money and finance. Just a fresh generation making the same tired mistake of confusing more money with wealth.

Here's hoping they get to survive, if not profit from, today's new devaluation.