END_OF_DOCUMENT_TOKEN_TO_BE_REPLACED

Gold is not the ultimate inflation hedge. Nor is it often much use compared to stocks, bonds or real estate...

AFTER FALLING for 18 years as the 20th century reached its twilight, "the twilight of gold appeared to have arrived," wrote Niall Ferguson, now a Harvard professor, then an Oxford scholar, in 1998.

"Gold has a future of course," he added, "but mainly as jewelry" – a common enough long-term view of the metal, repeated every so often by economists, historians, columnists and analysts.

"The stuff has a historical place in the money market," as one New Zealand advisor put it in a client note in 2003.

"But gold's just that – historical," she added. It's so historical, in fact, gold deserves to be scorned – along with human sacrifice, living in mud huts and VHS tapes – as primitive, brutish and uncivilized.

"Was it not I," asked John Maynard Keynes, man of the moment when the world's financial system needed re-booting in 1945, "who wrote that 'Gold is a barbarous relic'...?"

Man of the moment once more today, Keynes was hardly first to disdain the metal as money, however – even if he was part of the Bretton Woods' team which replaced it with US dollars.

Printed at will, the Dollar would prove so much more flexible, more available than tightly-supplied gold. Amid the Great Depression of the late 1920s and '30s, Keynes called for Great Britain and then the rest of the world to stop redeeming its paper notes for Gold Coins or bullion. The supply of money and credit could then start flowing freely once more, boosting demand for goods and services and sparking an inflation in prices that would make the value of outstanding debts evaporate. Yet the scheme was nothing new. More than two centuries earlier, John Law – another visionary economist – had proposed and attempted the very same thing.

"It is in the interests of the King and his people to guarantee bank money and to abolish gold specie," wrote Law as he applied his theory to France's very real financial crisis. Giving monetary power to, say, the stock of his Mississippi trading company, would "diminish the value of gold by taking away its usage as money."

But those dumb Frenchmen! Whenever they took profits by selling Mississippi stock as it doubled, trebled and rose 10-fold, they "thought they might turn it into heaps of gold and silver, which they call realizing," spat Law.

Couldn't they see the truth about gold?

"The lands of France are worth more than all the gold which still lies hid in the mines of Peru," Law declared. "The stocks [of his Mississippi venture] actually surpassed in value all the gold and silver which will ever be in the kingdom."

Yet still the French crowded out of his stock and into gold as the bubble burst in 1720. Come May, John Law banned the use of monetary metal altogether on pain of fines, imprisonment and even death – stealing a march on US president F.D.Roosevelt by some 213 years.

Make no mistake; Law would have been right to price Mississippi stock far above money...if only his Compagnie de l'Occident had held any real value at all. Instead, it owned a million miles of disease-ridden swamp, plus a sick colony of ex-beggars and thieves lost in Louisiana. Whereas gold offered then just what it offers today: very little of productive value, but a time-honored bolt hole when nothing else pays.

Gold's only value, you see, comes in owning it – whether for adornment, to escape the risk of counter-party default, or as a defense from inflation. Any other class of financial asset, provided it offers a yield, income or growth, should win out over gold. Just so long as they it keeps delivering that yield, income or growth. Because gold, a raw lump of metal, will pay nothing and do nothing besides holding its value across the very longest of long terms.

How long is the long term? "It is said that an ounce of gold bought 350 loaves of bread in the time of Nebuchadnezzar, king of Babylon, who died in 562 BC," wrote Stephen Harmston – then an economist at Bannock Consulting – for the World Gold Council (WGC) just when Niall Ferguson was condemning gold as mere frippery ten years ago.

"The same ounce of gold," Harmston went on in his study, Gold as a Store of Value, "still buys approximately 350 loaves of bread today." Which seems an odd swap to us, unless you're very hungry indeed. But "across 2,500 years, gold has in other words retained its purchasing power, relative to bread at least."

Crucially for long-term investors – especially for those with 2,500 years to wait – "Gold has had a real rate of return of zero," as Harmston observed. Meaning it doesn't beat or lag inflation or deflation. Not across the very long run, that period in which "We're all dead" as John Maynard Keynes, himself now very dead for six decades, famously (and fatuously) said.

To get this straight, it bears repeating. Gold is NOT the ultimate inflation hedge, not compared with dividend-paying, growth-dependent stock investments. Not unless you keep your entire savings tied up in Gold Bullion, hedging your very existence against a loss (or gain) in the value of money. And not unless you get to exist for an awfully long time to come as well. 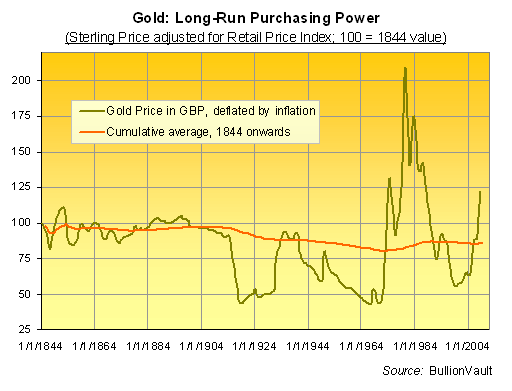 Across the slightly-less long run – say, a mere one-and-a-half centuries, rather than two-and-a-half millennia – the inflation-adjusted value of gold remains well below where it started on average.

The value placed on gold when the Bank of England set the International Gold Standard in motion in 1844 has rarely been seen since. And on the historical view (and gold is "just that – historical" as our Kiwi advisor noted above) it's in fact slipped by 15%, slowly declining before turning decisively lower throughout the 20th century.

Why would the world (the best proxy for which, we guess at BullionVault, is the well-attested British experience) put progressively less value on gold amid the murder and mayhem...bubbles and busts...of the last 100 years? Why did gold lose purchasing power – and then continue to lose value – both during and then for a long while after total war swept Europe, Africa, Asia and the Pacific? Surely such death and destruction should force gold to a premium?

The fact is, however, that the 20th century also brought fresh competitors for investment wealth...competitors rapidly offered to every class of investor as the Second World War receded and then the "Big Bang" of deregulation began under the Thatcher and Reagan administrations.

Yes, it may seem heretical (if not blindingly obvious, depending on where you start), but like charcoal and shire horses, steam trains and gas lamps, the 20th century subjected gold to a sharp loss of relative utility and thus value. Gold's only use comes in its ownership, remember; so its value as a store of wealth necessarily depends on the supply of alternative holdings. And the 20th century brought a flood of competition for that role.

The upshot today, almost a decade after Gordon Brown's Infamous Gold Sales marked not the high-point of anti-gold sentiment but also the very nadir of its 20-year slump? Free from default risk and inflating supply, gold suddenly looks very attractive to fund managers, investment advisors and private individuals who only a few years ago mocked the idea that metal might be worth owning.

Sure, the time may soon come when gold's one single use is matched and bettered again, beaten by other, more productive investments. But until then – and as gold's current price action suggests – what else will you hold as stock earnings tumble, bonds are over-supplied and threaten default, and the value of money itself is forced ever-deeper into genuine crisis?