END_OF_DOCUMENT_TOKEN_TO_BE_REPLACED

Why can't the world return to a Gold Standard today, defending the value of money and limiting credit...?

CENTRAL BANKING used to be easy, back when there was so little to do.

You raised interest rates to attract an inflow of gold, supporting your currency on the foreign exchanges and restraining new credit at home. Or you cut interest rates to deter savers, and give the economy a shot of cheap money.

That cheapness then fed into your currency's overseas value, making exports attractive but raising the price of foreign-made imports.

This little scheme – known as the Gold Standard – made depressions "more painful than depressions today," reckons Bradford de Long, professor at Berkeley. But then Gold was free from the cradle-to-grave promises of welfare statism, and managed by aristocrats with plenty of skin in the game. Who cared about the occasional slump in employment or wages?

Left to defend the value of money, the Gold Standard groped its way to a "culminating excellence" (as Glyn Davies calls it in his History of Money) in mid-19th century London. Five decades later, it was running pretty much worldwide. But then came the First World War, demanding huge supplies of fresh cash to fund the mechanized slaughter of 20 million men in the mud of Flanders, eastern Prussia, the Dardanelles and the Alps.

As world trade shut down, the entire world stopped swapping Gold for paper as well, so that paper could be printed without limit. Golden fetters just wouldn't fit any more. And from there, the inflation genie grew so big, fat and ugly, he refused to squeeze back into his lamp. Not without a fist-fight since called the Great Depression – a deflation of credit, prices and wages so severe, it took another world war...slaughtering twice as many people...to settle.

Fast forward to late 2008, and "there are very few historical parallels to the present set of circumstances," claims Mervyn King, the career academic currently in charge of monetary policy at the Bank of England in London.

Threatening lenders with direct control by the state, King reckons in fact that this now marks the worst banking crisis "since the start of the First World War". Which would explain why his own work – setting interest rates to defend, weaken or annihilate the Pound Sterling – has gone to pieces like him, shaking and stuttering with a severe case of shell-shock. 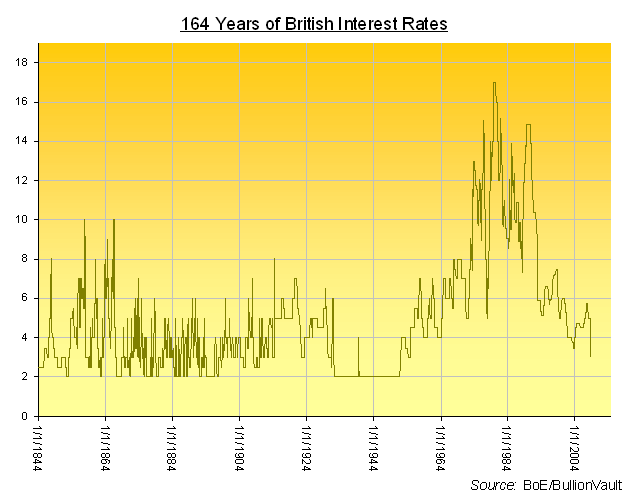 UK interest-rate policy since 1844, when the Bank of England was given the monopoly right to issue Pounds Sterling, makes a fair proxy for the price of money worldwide.

After all, the Old Lady of Threadneedle Street pretty much set the cost of borrowing for everyone else during the first eight decades above. Not least because she set the price of money for that quarter of the world's population living under their Imperial Majesties, the Empress-Queen Victoria, her son and his son in turn.

As the chart shows, the path of UK interest rates roughly breaks into four distinct eras so far. The three periods that most worry the wonks today, are the Great Depression of the 1930s, the Great Inflation that followed and peaked in the early '80s, and then the Great Moderation of cheapening money which came after that.

Policy-makers dismiss the second for fear of the first, all the while longing for a return of the third. The nine decades of Gold, in contrast, simply need not apply. Because there's just too much money today chasing too many votes to make such a limiting system appeal.

So in the spirit of "Yah-boo to you!", let's take a quick look at how the Gold Standard worked...back before the Great War, Great Depression, Great Society, Great Inflation and Great Moderation forced the world to dispense with gold and cosset $683.7 trillion of traded derivatives – fully 15 times the value of global economic output in 2007 – instead.

First, through a series of halting, ham-fisted attempts, the Gold Standard run from London saw the Court of Directors meet up to five times a week to tweak Bank Rate...now higher, now lower, or now not at all...as the quantity of gold in Britannia's vaults ebbed and flowed. 1893 saw no change to Bank Rate; 1895 saw it changed a dozen times. But for a half-century ending July 1914, the Bank of England's key interest rate never dipped below 2% and only twice rose above six.

The purchasing power of the Pound was little changed either. Not over the long run. What £1 would buy you in 1844 could still be bought for £1 in 1900, starting of course with 113 grains of gold – the Pound Sterling's unchanging value in gold.

The cost of this long-term stability, however, achieved by managing these inflows (and outflows) of gold via frantic adjustments to interest rates, "tended to intensify the growing tendency for instability of business conditions within England itself," according to an obituary for the Gold Standard written in 1937. The international Bankers' Panic of thirty years earlier makes a signal example.

Sparked by a sharp fall in the New York Stock Exchange, in turn caused by the growing threat of a sharp US recession, the Bankers' Panic saw the Bank of England hike its interest rate to 7% from 4% on one day, 7th Nov. 1907, in a bid to defend Britain's gold. That attractive rate of return sucked in £7 million of bullion from Germany, £3.5m from France, £2.5m from India and £6m from the gold-mining nations of South Africa, Canada and Australia. And with its gold reserves so quickly stabilized above pre-crisis levels, the Bank then reduced its interest rate, cutting it back to 2.5% by May 1908.

Trouble was, that short-term spike in British rates also pulled yet more Gold Bullion out of New York, leaving the United States "short of currency to be paid out to farmers and middlemen during the fall shipment of the harvest to the East," as yet another economic historian wrote late last century. And so "recession followed the financial panic" in the United States, and the depressing effect of that 7% rate still found its way into the broader UK economy, as well.

The swift relaxation to "cheap money", says Glyn Davies, "failed to bring down unemployment, which averaged 8% over the two years 1908 and 1909."

Can you imagine? Slashing interest rates failed to curb unemployment...just as the People's Budget of 1909 was making its way through Parliament, laying the foundation stone of today's welfare state in the UK.

Would gold and universal state-aid be able to get along? Could a limit on the supply of money, plus the promise of cradle-to-grave state aid ever co-exist? More to come, if you can bear it...in Part II...