END_OF_DOCUMENT_TOKEN_TO_BE_REPLACED

SEEING WASHINGTON'S belligerence over how Beijing pegs the price of its Yuan, three unsettling facts are buried amongst the latest central-bank gold data compiled by the World Gold Council...

As the gold-bug's Golden Rule says, "He who has the gold makes the rules" – an historic fact proven by the United States' own dominance of world finance and politics since the end of WWII.

And now that Congress is threatening trade sanctions against China for under-valuing its currency, the Yuan, Washington might want to take note of how its Dollar came to be the world's No.1 currency. 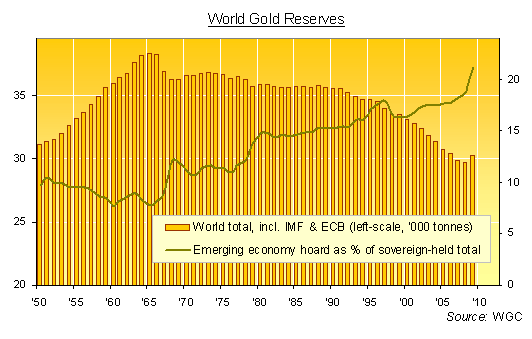 But even noting Moscow's frantic expansion of its gold reserves – primarily bought from domestic mine output, and taking Russia to 9th position in the sovereign league table – the WGC's comments underplay the deeper, political shift of monetary intent, if not power.

In full-year 2009, emerging-economy states grew their reported reserves by 17.8%, adding 868 tonnes of bullion to build a new record hoard of 5738 tonnes. Yes, China's announcement in April that it had added 454 tonnes to its reserves over the previous six years accounted for a big chunk of that move. But Beijing and the Kremlin weren't alone in Buying Gold. By the end of 2009, non-OECD members held half-as-much gold again as they did on average over the previous six decades.

Trying to force fresh Dollar-devaluation on today's Treasury bond holders is only likely to spur this underlying trend still further.