END_OF_DOCUMENT_TOKEN_TO_BE_REPLACED

AFTER NOTING an historic
move higher in the Gold
Price last month, maybe we should be wary of picking a bottom today.

Cracking above 40,000
Deutsche Marks Per Kilo, the price of gold – when converted back from the
Euros that German investors now clutch – promptly sank almost 14% from that
27-year top.

In the ensuing sell-off (to date) it bottomed (so far) at
the equivalent of €561 per ounce on Tuesday. (You'll note the caveats. The last
real sell-off took the Euro gold price right down to a 20% loss.)


But our deep mistrust of technical analysis has failed to
beat our fat crayons again. Because the Gold Market low (so far)
coincides precisely with another key level in the metal's long-term ascent: 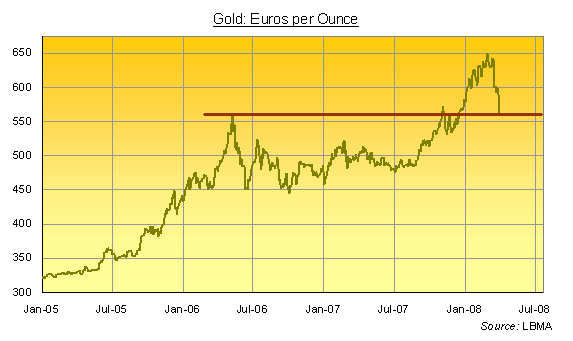 The mainstream British and European press ignores pretty
much all investment news by screwing its eyes tight and hoping the public won't
mind. Which we don't, as a rule.

It takes some kind of mania to shake the mass of so-called
"savers" to demand prices on tap (tech stocks at the end of '90s;
real estate until summer last year). Only a genuine scandal leads the press to
wheel out a half-decent analysis (Enron, Northern Rock, Bear Stearns).

So it was disquieting to find gold splashed across the
London media last month. Just as in May 2006 – the last blow-off top – the shiny
yellow stuff even made an appearance in the tabloids, on radio and on breakfast
TV. And the last time gold made headlines on the BBC news, any British, French,
German or Italian investors choosing to Buy Gold lost one fifth
of their money inside a month.

And your crayon doesn't need blunting to match that top with
this week's low (to date). So for now at least, that level – of €561 per ounce
– marks the bottom of the latest plunge to clear weak hands out of the Gold Market.

Standing almost 14% below the new 27-year high hit on March
3rd this year, that former line of what professional chartists call
"resistance" might just prove to be what they'd say is
"support".


If not, it will become "failed support" – the
failure being the market's fault, of course, rather than any error by the
analyst or his thick wax crayon.