END_OF_DOCUMENT_TOKEN_TO_BE_REPLACED

Chocolate bunnies will vote for an Easter heatwave before policy-makers vote to defend the value of money...

THE EUROPEAN SINGLE CURRENCY has hit two fresh life-time highs against the US Dollar already this month.

And we're only one trading day in!

So might US investors want to switch out of gold bullion ahead of Easter this year and move into the single currency instead? After all, the Euro still pays 4.0% interest per year – a feat that dumb gold could never promise or achieve – and with Eurozone inflation holding at a record 3.2% year-on-year in February, the European Central Bank (ECB) is clearly in no mood to start slashing rates now.

"Inflation will not slow as markedly as supposed," warned the ECB's Axel Weber last week. Colleague Juergen Stark added that he was "highly dissatisfied" with the current surge in the cost of living.

Tight money to come then, right? Well, the Gold Market doesn't buy it. Not at $1.52 to the Dollar – with European manufacturing squeaking and Mediterranean house prices slipping. 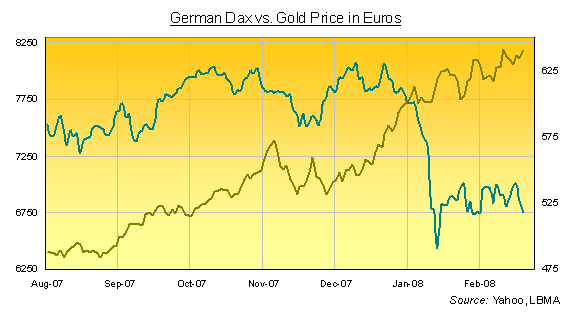 The Gold Price for French, German and Italian savers just keeps on rising, gaining for six of the last seven months.

And yet luxury car-maker BMW says it can't bear a further "sustained rise" in the Euro above $1.50 to the Dollar. Last week it cut 5,600 jobs.

Dassault Aviation in France says it can't compete at this kind of exchange-rate either. "The natural step is to shift to the Dollar zone [incl. most of Asia, remember] or low-cost areas as they have done in the car industry," said CEO and chairman Charles Edelstenne to Le Monde last week.

"This could include parts of our factory plant and some research tasks."

Put another way, Europe has got the worst of both worlds right now – a high-value currency that's crimping exports, and yet surging inflation at the very same time. So the European Central Bank needs to talk tough while doing nothing, hoping the inflationary and currency pressures don't squash the economy both at once.

Only this week, leading policy makers have said they are "increasingly concerned [and] vigilant" on the impact the fast-sinking US Dollar is having on Eurozone exports. So it's a good job the old economies retain such political importance as well. Right?

"To have an increase in the [voting] quotas of emerging countries – China, India, Brazil – is very difficult because the sum has to add up to 100%," noted Dominique Strauss-Kahn, head of the International Monetary Fund (IMF) in late February, "so some others must lose.

"The ones who are going to lose are mainly the European countries and that is the reason why they may be reluctant [to vote for change]."

The debate goes far beyond the IMF, however, that brave remnant of post-war global planning. All top-level political groupings now face the problem of too many powers, with too much at stake, all wanting to be members of the top few spots in the "oh-so-crucial" club.

The G-7 group of industrialized nations, for instance, currently invites three Eurozone nations to the party – Germany, France and Italy – as well as Canada, Japan and the United States.

The United Kingdom gets to tag along too, not least because it's still vying with China for the No.4 slot in world GDP behind the US, Japan and Germany. It also prints the world's No.3 reserve currency, the British Pound. And my, but how it prints it! 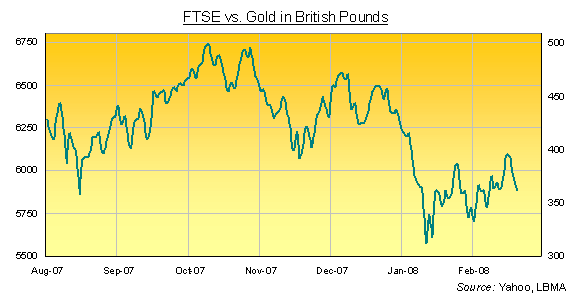 Growing by 12.9% in January from a year earlier, the broad supply of Pounds Sterling has now been expanding at a two-decade record since March 2005.

No wonder the Gold Price in British Pounds is surging alongside the UK's trade & government deficits. But "when are we gonna get the real players, with the money, in the middle of these [G-7] debates?" asks Jack Welch, former head of General Electric. He was talking to Larry Summers, US Treasury secretary at the tail-end of the last Clinton presidency, on CNBC last week.

"It seems like some of our government institutions are living the last war, for example the G-7. Four European economies, Canada, Japan and you guys [the US Treasury] all meet...but the money's somewhere else."

"Oh, you know how these things go, Jack," replied Summers, former president of Harvard University and now a part-time hedge fund consultant in New York. "It's much easier to get people in than it is to get other people out...

"You want to have a reasonably small group. We worked with the Canadians to set up the G-20 for exactly the reasons you give. And I think [US Treasury] secretary Paulson is to be commended for the effort he has put into having a regular financial dialogue with China on a bilateral basis.

"I think you're gonna see this kind of evolution. Look, if we wanna address this issue of sovereign wealth funds – which I think is a concern, though it's a concern that has to be kept in perspective – the way we're gonna do it is by having dialogue with the countries that, just as you say, the countries that have the money. Some of them are China, some of them are in the Middle East, and I think we do need to recognize more than we probably have before that the distribution of financial power and influence and capacity is pretty different from the distribution of sort of political congeniality with US interests across the board.

"That means we may need to have a somewhat different grouping for the foreign ministers and the finance ministers."

Can political and financial power really be split into two different groups...with the United States at the head of both, choosing its allies here but inviting a different clique of friends there? 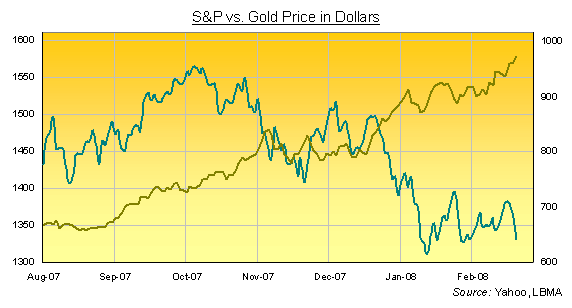 Perhaps with Europe gnashing its teeth about the high Euro, it's actually time for the Dollar itself to bounce, rallying from new all-time record lows on its trade-weighted index and forcing US Gold Prices lower.

Sure – it might require higher interest rates from the Federal Reserve, rather than the campaign of monetary destruction begun by Ben Bernanke back in August. Or conversely, those new record lows in the world value of the US Dollar might help stoke US export sales so fast, it revives the major Wall Street stock indices and erases the last five months of losses.

Should the Dollar and Wall Street's collapse continue, meantime, some kind of new monetary world order will only continue to look ever more likely. Russia is preparing to price and sell crude oil in Roubles, for example, rather than the Dollar. The Rouble might also be used as one means of payment on a forthcoming Iranian oil exchange in Tehran, according to Iran's ambassador to Moscow last month.

But whatever comes, and no matter what happens to the price of Gold, don't expect the chocolate bunnies of today's monetary order to vote for either Easter or a heatwave...let alone both at the same time.