END_OF_DOCUMENT_TOKEN_TO_BE_REPLACED

Why the debt ceiling drama has sent investors fleeing to gold...

WASHINGTON'S debt ceiling squabble has seen the Gold Price breach $1600. The standard explanation is that investors are scared and gold is a "safe haven" investment. But why are they scared? And why exactly are they fleeing to gold? asks Ben Traynor at BullionVault.

First up, some background. Since 2001, US national debt has risen 138% in Dollar terms. This doesn't account for inflation – indeed, as you'll see below, inflation is viewed by some as part of the 'solution' to the debt problem.

Measured in terms of Gold Bullion, however, US national debt has actually fallen for the last ten years: 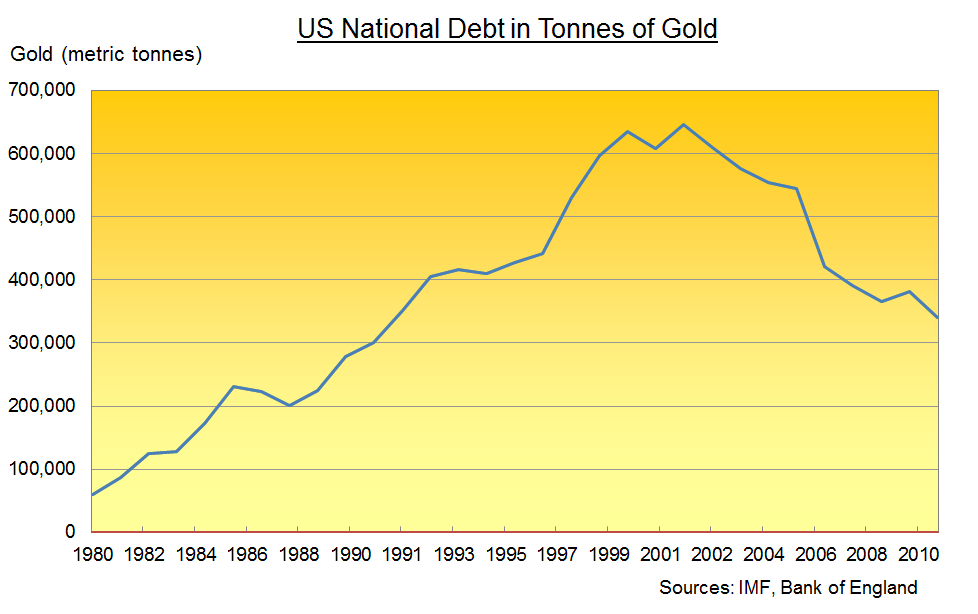 In other words, the average annual Dollar Gold Price has risen faster than Uncle Sam has been able to write his IOUs – quite a feat. The US now 'only' owes the equivalent of 340,000 tonnes of gold. That's still more than the total sum of gold ever mined (twice as much, in fact, according to best estimates) and way above the 8,113.5 tonnes the United States Treasury says it holds between Fort Knox and the New York Fed.

But why would gold demand rise – pushing the Gold Price higher – in response to the growth of national debt?

Like money itself, debt – be it a personal loan or the kind racked up on our behalf by our elected representatives – represents a claim on resources, aka wealth. At some point in the future, the debtor is expected to hand some wealth back to his or her creditor, ideally the principal plus some level of profit. Trouble is, debtors don't always follow the script.

Now, when it comes to resolving its national debt, the US government has five options:

The first option tends to be the one creditors bank on, in order to get back what they lend. Right now, however, the prospects for strong growth look bleak.

Check out these scary numbers:

Economists may quibble at the margins about the data, the methodology, and so on. But a stark fact remains – the US will need to post some stellar growth rates just to stand still. Unless, that is, its government picks one of the other four options. Besides the highly contentious Option 2 of raising taxes, in fact, this is exactly what America's been doing for years.

Option 3, more borrowing, has been exceedingly popular, leading to accusations that Washington is running a Ponzi scheme. The problem with a Ponzi scheme comes when you run out of new schmucks to help pay profits (or simply repay the principal) to early investors.

Is $14.3 trillion that point? Clearly not – the debt ceiling is an artificial, political construction, not a reflection of any financial reality. Investors remain willing to hold US sovereign debt, as shown by – and despite – the appalling rates of return it offers. (Bond yields fall when prices rise, and US debt has never paid so little in interest.) This may not always be the case, though, especially if creditors start to fear that Option 4 is on the table and a true default is looming.

One thing the debt ceiling squabble has achieved is to make the once notional concept of a US default frighteningly real. Ratings agencies – never the quickest on the draw, as the subprime disaster proved – have repeatedly issued warnings that they might strip America of its AAA status, the "triple-A rating" which signals no risk of default. Standard & Poor's even went so far as to say there is a 50-50 chance this downgrade will happen before the end of October.

Newspapers meanwhile have been full of stories of what will happen if the debt ceiling isn't raised. Will the Treasury refuse to pay bondholders or veterans? Social Security claimants or military contractors? Suddenly we have a much clearer vision of what an America that can't pay its debts might look like.

The artificial "debt ceiling" aside, a true US default still seems unlikely, at least for now. But bondholders should have perhaps taken fright, and nor should they forget this scare too soon. The fact that they keep backing Uncle Sam – paying such high prices to buy his debt that Washington is paying them record-low interest rates – is nothing unusual, however. Complacency is the bondholder's biggest risk, but also his most common trait. August 1914 "came like a bolt from the blue" to Europe's creditors, despite the loud and clear warnings of war. From 1979, when US price-inflation breached double-digits, it took another two years for 10-year US bond yields to catch up.

Today, several leading US economists repeatedly (and rightly) ask "Where are the bond vigilantes?" The answer is Europe, where they're driving up bond yields at their own expense by pushing bond prices lower, causing a rise in refinancing costs which will force a change of debt policy – or at least force the issue – in the increasingly less "peripheral" Eurozone states.

Two-year Greek government bond yields this week reached 39% as prices cratered once more. But again, bondholders were late to the game, as yields only began rising 18 months ago, first rising from a decade-long average below 3.5% in January 2010. Athens had long been subject to "special measures" from the European Commission, aimed at forcing it to reduce its annual deficits. Perhaps the fact that virtually every other European state was also in breach of the 3% deficit, 60% total-debt-to-GDP ratios meant Greece's problems looked unexceptional. But the absence of rising bond yields to date does not mean that there's nothing to fear in US debt. It simply means, just as in 1914 and 1979, that bondholders haven't got scared yet.

How long before America's creditors start insisting on higher interest rates to compensate for the risks that come with lending to the States? If they do, Option 3 – more borrowing – may become prohibitively expensive. And Option 5, meantime, is already happening. Lend the United States government $100 today, and you'll get $100 back when your government bond matures. You'll also pick up interest in the meantime. Unfortunately, though, at current interest rates this won't compensate you for inflation in the cost of living.

Official consumer price inflation for June was running at 3.6% for June. Unofficially it could be much higher, as John Williams of ShadowStats suggests. The yield on a 5-Year US Treasury bond, meanwhile, is currently around 1.5%. So the $100 plus interest you get back over five years will buy you less than your original $100 would have if you hadn't lent it to the government. The purchasing power of your wealth has been eroded – with Uncle Sam enjoying the profitable side of the deal.

The US government's plan – if you can call it a plan – for dealing with its debt mountain is thus a combination of Option 3 and Option 5. Keep on borrowing, while devaluing the money you plan to pay back. Option 1 is still needed, therefore. Because the burden is not shrinking, and won't shrink, without the economic growth which the US so clearly lacks.

Which brings us back to gold. Ten years or so back, a handful of investors started to realize that US debt was simply getting too big. It could not be paid off via the conventional method (Option 1) of growing real wealth. Option 2 (raising taxes) was then, as now, too hot to handle (indeed, by not cutting spending, Bush's tax cuts made debt-growth very much worse). But Option 3, many of these gold buyers felt, could not last forever – there comes a time when investors wise up, and even a sovereign nation printing the world's number one reserve currency loses its access to cheap credit.

This is exactly what is happening right now in Europe, and why bond buyers are demanding higher interest rates for lending to Greece, Ireland, Portugal and even Italy and Spain, the Eurozone's third and fourth largest economies.

So with Options 1 out of commission, Option 2 at an impasse, and Option 3 looking increasingly shaky, only default and devaluation remain. And gold has traditionally been an excellent hedge against both.

Let's take default first. For one, gold simply can't default – you own it. It's not a promise to pay you, it's a possession.

Secondly, a US default would be a highly deflationary event. It would introduce unprecedented levels of uncertainty to the credit markets. We saw how they seized up in 2007 as the subprime bubble burst. Any signal from the world's most powerful nation that it's okay to not pay your debts would cause immeasurably more damage. And as credit markets seize up, default sucks money out of an economy, lowering prices of everything from labor (wages) to a carton of milk.

In his seminal book The Golden Constant – which looked a 350 years of economic data – Professor Roy Jastram showed that gold has historically gained purchasing power in periods of deflation. This makes gold an attractive portfolio hedge for anyone who fears a US default may one day become too clear a threat to be dismissed as a media scare story.

More likely – and the one the Treasury and the Fed have gone with so far – is the inflationary Option 5, eroding the value of the Dollar. Gold has a historical advantage here too. It has been a recognized store of value for most of human history – not something that can be said for any paper currency. It also can't be created, and is naturally in limited supply.

So investors looking to preserve what they've earned see gold as a convenient, proven way to store their wealth.

And now the political theater has drawn attention to the gargantuan size of America's debt, more investors are opting to take money out of the firing line – pushing the Gold Price to this week's new record highs.

The fact that gold has risen more than national debt is good news for US investors. Because while you don't have a say in how big that debt gets, that doesn't mean you and your children won't have to pay it. The rising Gold Price means that those who bought gold will have something left after they've picked up the tab.