END_OF_DOCUMENT_TOKEN_TO_BE_REPLACED

At this current pace, private Chinese demand may overtake India's by 2014 (if not sooner), giving the world's two most populous nations two ounces of gold in every five sold worldwide that year. But already, this further eastwards shift is showing in global Gold Prices.

Coinciding with the post-harvest wedding and festival season, Indian demand typically peaks with Diwali (the Hindu "festival of lights") in early November. Chinese households, on the other hand, ramp up their gold buying around Chinese New Year (starting on Feb. 3rd in 2011) – and as the hump in global demand is moving from Diwali to X?n Nián, so too is the annual peak in the global Gold Price. 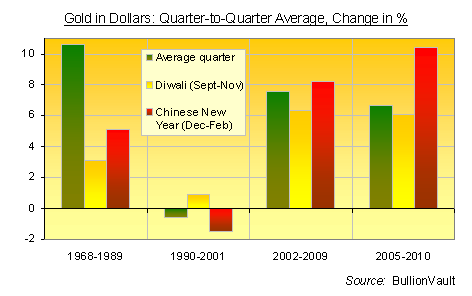 New Delhi began liberalizing Indian Gold Prices and retail sales in 1990, after imposing strict controls (and only expanding a thriving black market, of course) in 1968. During the global bear market in gold which then continued to 2001, average Dollar prices between Sept. and Nov. bucked that trend, rising even as the underlying direction was down.

Beijing then began liberalizing its domestic gold market a decade ago, first with the end of jewellery price controls in 2002, and then with the launch of Shanghai's bullion-trading exchange in 2005. As our table shows, Diwali has since lagged the average quarterly gain during this current bull market, whereas the following three months, in contrast – the period leading up to and including China's New Year and Lantern Day festivals a fortnight later – have strongly outperformed, and by a widening margin as liberalization has broadened. 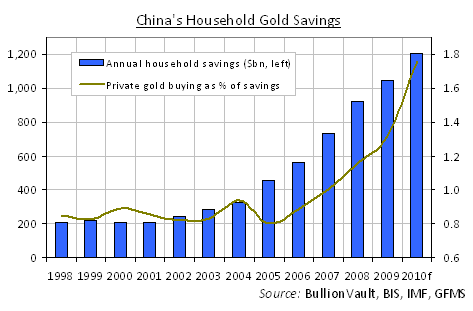 It's hard to overstate the role played by Chinese households in gold's current bull market. Yes, Indian households remain the world's No.1 gold buyers for now, as they have been since the mid-20th century and before. But nearly 16% of global gold demand went to Chinese households between July and October this year, rising from the previous three-year total of 14%. And as the stats' table above shows, Chinese consumers are already making a big impact on global Gold Prices.

Put another way, Chinese savers have bought almost half as much gold since the global financial crisis began in mid-2007 as all investors living in the developed West. Yes, there's more of them, but China's GDP per head is barely one-tenth the size on average.

More critically, private Chinese consumers bought as much gold in the last two-and-a-half-years as the People's Bank of China owns in total. Indeed, "The PBoC is encouraging an increase in the gold reserves of the people," as UBS metals strategist Dr.Edel Tully said at the LBMA's Bullion Market Seminar last Thursday. Which, for that communist dictatorship, is a nice way to describe the blurring of public with private wealth. The state gets to hoard the ultimate "anti-Dollar" without declaring its hand. It also gives consumer spending an outlet that doesn't impact the cost of living – an inflationary safety valve, if you like – even as deposit interest rates are held 2% and more below the rate of inflation.

This "nation-state" gold buying cuts both ways too, with dips in the gold price (or threats of Yuan revaluation or higher interest rates, which amount to the same thing) repeatedly met with neatly-timed leaks and rumors of the PBoC's gold-buying intentions. As we told CNBC last week, there's now an awful of household wealth denominated in gold; Beijing has been actively encouraging that shift since deregulation began a decade ago. And since "To get rich is glorious" (as then-premier Deng Xiaoping announced in 1980), then being seen to help defend the people's wealth is equally smart for the politburo.

(The Reserve Bank of India made the same show last year, buying 200 tonnes of IMF gold straight after a sharp drop in private Indian gold buying.)

Yes, both Indian and Chinese households are "forced" buyers during their respective gold-buying festivals, when tradition, religious (or quasi-religious) associations and social pressures conspire towards a peak in demand. But where Asia's deep love for physical gold used to look unsophisticated, barbarous even, to Western advisors and analysts, it's increasingly coming to signal instead the transfer of real wealth from West to East – and a transfer further east too, as China gains on India as the world's No.1 buyer. 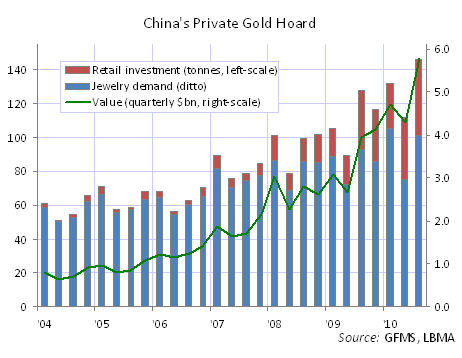 Both Indian and Chinese households are also switching to more efficient forms of gold investment too, continuing to accumulate jewelry but choosing coins and Gold Bars for a growing chunk of their holdings. That might suggest a growing "speculative" edge, inviting fears of mass liquidation in future. But India's private gold market has long been two-way, with jewelers buying back metal (albeit it on much wider margins) as families realize gains or mobilize the cash-value of gold for other investments. That's rarely meant a net outflow of gold, however (India was a net exporter of gold for the first time since the Great Depression in the first-quarter of '09). And if you want to defend your savings as economic power shifts to the East, it might make sense to buy a little of what the East is increasingly using to store its fast-growing wealth.

Buying Gold today? Make it simple, secure and cost-effective by using the world No.1 online, BullionVault...