END_OF_DOCUMENT_TOKEN_TO_BE_REPLACED

These swings in the Gold Price are less Led Zeppelin, more Butthole Surfers...

IN EARLY AUGUST 1972, the Gold Price hit what was then a fresh all-time record, writes Adrian Ash at BullionVault – $70 per ounce, twice its fixed price of a year earlier, when US president Richard Nixon untied the Dollar, and thus the world, from the last pretence of a Gold Standard.

With hindsight, the 1970s' inflation makes what came next sound as inevitable today as the guitar solo in Led Zeppelin's Stairway to Heaven. Yet it took 6 months to break that new record high in the Gold Price. It took another six months to break the following July's top at $127...almost 7 months to break the April 1974 high of $179.50...and well over 3 years to top that December's peak at $195.25. 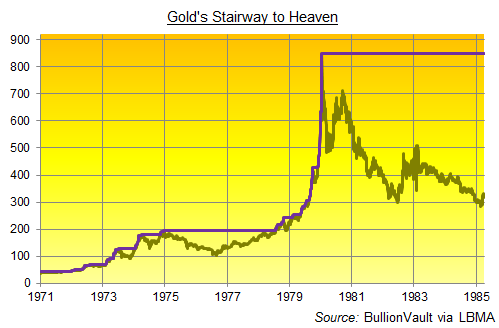 Not selling between Dec. 1974 and July 1978 would have been tough. Especially as US savers (aka "speculators") had been drawn in right at the top.

On 31st December 1974, Nixon's successor – Gerald Ford – made Buying Gold bullion legal for the first time in three decades. In anticipation, international dealers took the Gold Price to its near-$200 peak only one day before. By the middle of 1976, America's new investors had lost 45% before costs.

Who could have known that they would recover that loss...and make a further 355% gain...by the end of January 1980? And who could have guessed that second peak would then prove gold's high-water mark – a ceiling as distant as heaven itself – for the next 28 years? 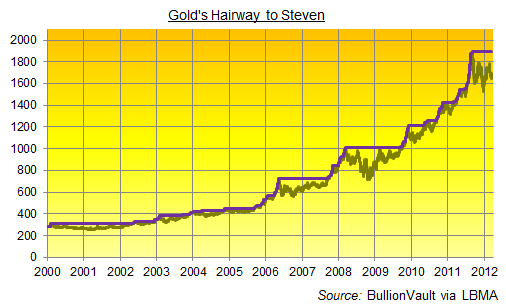 Just how long might it take to get there again? This century's bull market in gold has taken seven longer pauses so far. Ignoring the first (it saw the Gold Price fall very nearly back to 1999's two-decade low at $252.80 per ounce), the average wait has been almost 11 months.

The last two pauses lasted nearly a year-and-a-half. The most recent – starting with the collapse of Bear Stearns – knocked a third off the Gold Price in Dollars. Its next peak (if not its last) came 180% higher again.

Gold's long bull market to date has been less Stairway to Heaven than Hairway to Steven. Because like the Butthole Surfers, you either love it or hate it, and most people just don't get it at all. But it makes one hell of a noise regardless, going on (and on), scaring pretty much anyone who goes near it. Right until it stops.

"Eventually," writes Dylan Grice, strategist at SocGen in his latest Popular Delusions note for clients, "there will be a crisis of such magnitude that the political winds change direction, and become blustering gales forcing us onto the course of fiscal sustainability.

"Until it does, the temptation to inflate will remain, as will economists with spurious mathematical rationalisations as to why such inflation will make everything OK...Until [then], the outlook will remain favorable for gold. But eventually, majority opinion will accept the painful contractionary medicine because it will have to. That will be the time to sell gold."

Meantime, you can never know whether you're buying an uptrend, instead of the top. And gold took very nearly 28 years to recover its Jan. 1980 high – at $850 per ounce – 7,025 trading days to be exact. That was longer even than the recovery in US stocks after the Great Crash of 1929 (precisely 25 years on the monthly close). We won't know until November 2017 whether Tokyo's stock-market and real estate bust of 1989 gets to set a new record. And the 30-year bull market in US Treasury bonds is sure to leave a heavenly high-water mark when interest rates inevitably turn upwards from today's all-time historic lows.

Weighing the pro's and con's of Gold Investment today? Make sure you slash your costs, without becoming anyone's creditor, by using world #1 online, BullionVault...