END_OF_DOCUMENT_TOKEN_TO_BE_REPLACED

CHECK OUT these two charts, both of which were highlighted by Edel Tully, precious metals strategist at UBS, in her summary of the London Bullion Market Association Annual Conference this week, writes Adrian Ash at BullionVault.

First, she said she's adding this chart – hoisted from a conference presentation by Albert Cheng of the World Gold Council – to her slide deck: 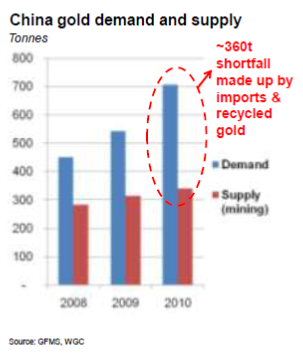 Bigger picture, the chart makes a neat pairing with this slide, used by Franco-Nevada chairman Pierre Lassonde in Monday's keynote speech – and already a key fixture in any analyst or strategist's PowerPoint slides, according to Tully: 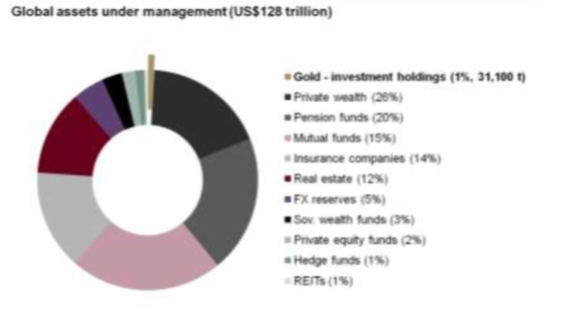 Plenty of reasons to be cautious on gold were flagged by this afternoon's "Bubble or not?" debate. In particular, the risk of a parabolic rise – similar to how silver shot higher this spring – could see "safe haven" buyers scared off by volatility. (Silver investment flows have certainly turned "hesitant" since then, noted GFMS's Philip Newman.)

Or maybe existing investors will soon begin tiring of year-on-year gains in gold, and start rotating into other asset classes instead of waiting for what they might forecast as a "top". Or maybe a blow-up in China – sparked by its own domestic credit and real estate markets, if not central-bank action to try and cool them, along with inflation – could see its tug on the world's gold supplies pushed the other way, as the feel-good affinity for gold is reversed by economic slowdown or even recession.

But for now, as one panellist put it in the Oxford-style debate – and with Gold Investment accounting for just 1% of the world's financial assets today – "This looks less like a bubble than an opportunity."