END_OF_DOCUMENT_TOKEN_TO_BE_REPLACED

Gold Investing has clearly been right. But is it contentious enough to sit tight...?

The BEST WAY to make money from investing? asks Adrian Ash at BullionVault.

Investing legend Warren Buffett reckons it's "being right" – which is about as down-home as Berkshire Hathaway's "Sage of Omaha" could hope to get. "Sitting tight" was the key for legendary "boy plunger" Jessie Livermore, whose personal depression drove him to suicide in 1940, apparently leaving $5 million behind him. Modern hedge-fund legend Hugh Hendry says your best shot comes from "contentious" positions – taking on trades that no one else dare back, because they can barely conceive of a world in which they might ever pay off.

And right now, what could be more contentious than Gold Investing? 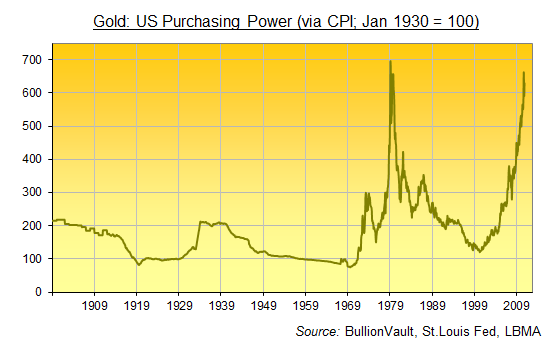 "Without any contentious posturing in your portfolio, I suspect you're not going to make money," Hendry told an interviewer this summer."

"You're not guaranteed to make money by being contentious or controversial," he stressed. "But if you can get your mind around the most contentious viewpoints, I think you stand a better chance of making money."

Now, we know what Buffett thinks of gold, and we know that Hendry didn't buy the bull back in 2008, when gold made headlines amid Phase II of the global financial crisis to date.

"[People] fear financial anarchy. Gold Coins are sold out. Everyone is in."

Contrarian investors, therefore, should have stayed out – or even gone short – at $800 per ounce. Because "everyone [was] in." Except for all those people who've been Buying Gold since, nudging it back up towards that all-time high – in real terms – hit at the start of 1980.

Hence the contrarian's contentious quandary today. Because if you read only the financial pages, you might imagine everyone is "all in" as 2011 nears its end. Looking at our chart above, you might also think that gold returning to record levels – adjusted for inflation – means it is plainly nearing its top, too. Subject to the same "mania" that led investors over a cliff in the early Eighties, the bull market has been and gone. You missed it. But then, so has pretty much every other private investor and saver in North America and Europe as well.

Only a tiny proportion of Western households hold any real chunk of their savings through Gold Investing today. The continued surge in consumer demand is coming from Asia instead, a market driven by cultural affinity – and a recently released appetite for gold ownership – that finance professionals and advisors can barely imagine in the West.

Yes, central banks in the rich emerging economies are quietly Buying Gold at a record pace as well. But that only makes gold yet more contentious still – sitting right on the edge between them and the developed-world's sellers of a decade ago. The really contentious view might instead see gold instead causing a real shock, and going still higher again in just the way it didn't three decades ago.

As for Jessie Livermore, when he made the bulk of his trades over a lifetime ago, gold was money – the end, not the means, of making a profit.

Can you imagine that?

Looking to start Gold Investing today? Make it simple, secure and cheaper than anywhere else using world No.1 online, BullionVault...