END_OF_DOCUMENT_TOKEN_TO_BE_REPLACED

Could the trend of gold up, everything else up, have just reached its end...?

THE FINANCIAL MEDIA took a while to catch on.

"Gold funds fattened on war, global instability and a falling Dollar in 2003," exclaimed USA Today as the New Year of 2004 got underway. The popular US paper failed to note that none of those calamities had stalled the equity markets ongoing recovery, creating the weird situation of rising Gold Prices alongside rising stock markets.

"Gold bugs hope that 2004 will be even better," it went on, "but an outbreak of good news could dash those hopes." Yet no. Good news for global stock markets collided with great news for bond prices, real estate and emerging markets in 2004.

Oil traders grew rich as well, but all this good news for financial markets failed to stop the bull market in gold. The metal rose more than 10% by the fall of that year.

"At $420 an ounce," said USA Today as 2004 drew to a close, three years after the bull market in gold had begun, "gold has become a fairly expensive insurance policy." But by the end of 2005, golden insurance cost more than $500 per ounce – a 23-year high – and few people buying the new exchange-traded gold funds such as StreetTracks GLD seemed to worry about just what it was they were insuring.

The insurance policy of tracking the Gold Market, if not actually owning any gold whatsoever, kept paying out without any awful calamity striking the planet. Or rather, nothing awful enough to derail the rally in world stock markets was needed to keep pushing gold higher. Equities and the Spot Price of Gold just kept rising together. 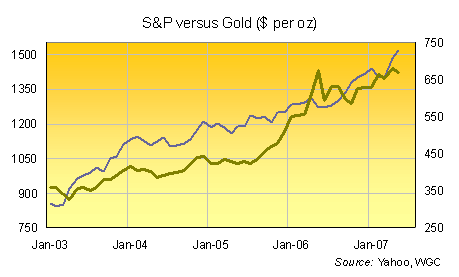 "There are serious drawbacks with gold investment of any kind," warned a professional financial advisor to the BBC in London in late 2005. "Except for the past three years, the price of gold has been on the slide after a peak in 1980."

"Investors have piled into gold in recent months," added the Financial Times, as if aghast. "Many are betting on rising prices."

Just think – betting on the gold market because you think it's going up! Of course, as an insurance policy, then perhaps gold did look expensive. But the old investment saw of advising you to "Put 10% of your money in gold and just hope you don't need it," became out-moded as the metal rose alongside stocks, bonds, junk, real estate, credit derivatives and oil prices alike.

Who cared if nothing bad happened – or nothing bad enough to derail the boom? As a risk-capital play, just another hot snack in the lunchbox of tasty reflation treats, gold just kept rising on the tide of money pushing all boats higher.

Indeed, by late 2006, the Gold Market's uptrend starting amid the Tech Crash's worst months of 2001 continued to run higher as the Dow approached its own former highs, too. Real interest rates had turned negative, helping to destroy the Dollar and making borrowing to speculate smell like a no-brainer. And all this time gold itself, a losing investment for the two decades to 2001, remained a classic "buy" on the charts. 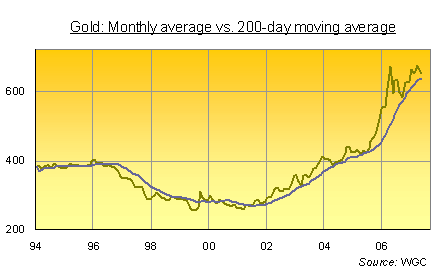 Spot Gold Prices have since continued to rise above their 200-day moving average – itself rising strongly – giving a classic if crude signal for chart-minded traders to stick with the trade. And so far this month, gold has been rising even as global stock markets have turned south.

Could the trend of gold up, everything else up, have just reached its end?

Last week saw the price of gold rise 2.3% for US Dollar investors, while the broad S&P equity index lost 1.1% of its value. Gold also gained nearly 2.1% against the Euro, while the EuroFirst 300 index of European stocks lost 1.7% for the week. British investors saw gold rise 1.4% against the Pound Sterling, while the UK's leading 100 shares dropped 2% of their value on average over the week.

Does this mark a new departure for that investment insurance known as gold? "Of late," notes Wolfgang Wrzesniok-Rossbach in the latest metals report from Heraeus, the German refining giant, "when the financial markets came under pressure, gold also found itself losing ground."

Indeed, since 2003 the gold market has risen – and fallen – in lock-step with the world's major stock markets. By the end of 2006, as James Grant has noted in Grant's Interest Rate Observer, the correlation between gold and the S&P500 had shot higher, very nearly reaching the magical "1.0" reading that would signify a perfect arm-in-arm relationship.

Hence the comments littering Bloomberg and Reuters earlier this year whenever gold took a hit. "There's a flight from risk assets," said pundit after pundit, all noting a drop in both stock markets and gold.

"But [now] this time around it seemed to react inversely," says Wrzesniok-Rossbach. Gold so far in July has jumped higher; the S&P – along with global stock markets – is barely treading water, albeit near new record highs.

"Even so, to make a qualified assertion that gold has re-discovered its traditional role as a 'safe haven' is perhaps a little too early," warns Wrzesniok-Rossbach, which perhaps will prove true. But for now, as the S&P and Dow tiptoe away from their latest all-time record highs, an insurance policy owned outright – rather than held in trust through the complex legal contracts of exchange-traded gold funds – might mean Physical Gold Bullion could look cheap.

"Gold is still not getting the headline space it will in the next year," says John Dizard in the Financial Times, "but it has broken out of the desultory downtrend that began in April 2007." With the ongoing collapse of complex credit derivatives now threatening to knock out the support of mergers & leveraged buy-outs from under the stock market, "the perception of underlying systemic risk is not going away," says Dizard. Indeed, "this trend also seems to be supported, so far, by the European national central banks, who aren't selling as much gold as they were."

Gold up, everything else down? Stranger things have been known...such as the four years of strong correlation between gold and the stock market starting in 2003.

If you're minded to Buy Gold Online Today, enjoying the best prices and lowest fees available to private individuals wanting to own the metal outright, click through to visit BullionVault now.