END_OF_DOCUMENT_TOKEN_TO_BE_REPLACED

What The Economist doesn't know about Gold...

The Buttonwood column in last weekend's Economist is only the latest analysis to miss the point, despite tripping over it, too.

"Owning gold is traditionally seen as offering protection against inflation. And inflation is very bad news for owners of government bonds.

"But the ten-year Treasury bond yields just 3.3%, a level that is towards the low end of the historical range...You would expect the performance of gold and Treasury bonds to be inversely correlated. When gold was at its real all-time high in 1980, the ten-year Treasury-bond yield was 10.8%. Fixed-income investors had suffered years of negative real returns in the 1970s."

Ay, there's the rub, as we never tire of telling people here at BullionVault. They tire so quickly of hearing it, however, that even The Economist can't square the circle of rising gold, falling bond yields.

But it was never inflation alone that drove people to buy or sell a lump of rare, indestructible metal in the '70s. Instead, it was rather the rate of return offered by cash and bonds – those better competitors as a store of wealth, all things being equal – over and above (or below) inflation. 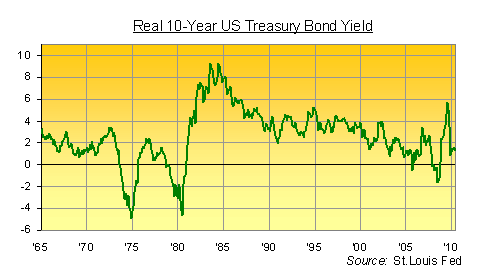 That's why gold made a terrible inflation hedge in the 1980s and '90s, most especially for Dollar investors. Because no-one needed an inflation hedge. Not with 10-year Treasuries paying 4.3% average over and above CPI inflation. Not when the real Fed Funds rate averaged 3%-plus...leaving gold to drop three-quarters of its real Dollar value inside 20 years...as the real value of cash-on-deposit doubled.

Now compare and contrast with the last eight-and-a-half years or so, starting right around the Fed's low-rate response to the DotCom Bust. Consumer price inflation (on the official US measure, at least) has averaged barely half its previous two-decade average. Yet the real returns paid to bonds and cash have collapsed. Adjusted for inflation, in fact, the real Fed Funds rate has now been below zero for 54 of the last 101 months, matching the 54 months of sub-zero real rates which the Fed delivered in the 1970s. 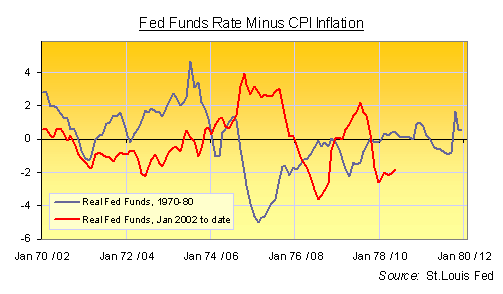 Things are worse still, however, for cash savers. First because the Seventies' 54 months of negative real rates were spread across 10 full years from Jan. 1970. Meaning that second, the overall effect on the average real rate since 2002 has been to drive it lower again.

Where next? Short of a revolution in Fed thinking (no sign of that today), the decade starting Jan. 2002 looks set to deliver yet more negative real rates before 2012, if not beyond. Which will continue to mean that:

Sure, the monetary metals have not been official money for many decades now. But the Fed's interest-rate policy is actively leading the remonetization of gold and silver as popular stores of value.

Because when "risk free" cash keeps paying a guaranteed loss, then a growing number of people will, in due course, start seeking shelter elsewhere. At the same time, holding gold and/or silver has ceased being a burden (bullion storage fees need not be onerous), inviting fresh flows of retained capital, tired of earning nothing or less.

Real returns to cash have now been low-to-negative for almost a decade, and so it might not be too long before a far broader, and thus larger, volume of savings turns from cash to the obvious and historic alternatives. Either that or the Fed will hike rates so high, you get 4% and more above inflation.