END_OF_DOCUMENT_TOKEN_TO_BE_REPLACED

A dead, defunct currency says the world's money supply is about to unleash an awful inflation...

AMID ALL THE BROU-HA-HA over gold hitting $1,000 an ounce for three short days this month, another milestone in this nine-year bull market went completely un-noticed.

Like the media-friendly $1,000 mark, this level offers a nice round number for evening news anchors to proclaim. It even comes with an extra digit – and it also remains to be reached and breached decisively, too.

But this level may prove much more important than $1,000 per ounce – and for plenty more people, too – because it shows just how strong and solid the uptrend in Gold Prices has been to date. Historically, it points to the underlying trends of both Dollar weakness and gold strength.

Trouble is, this new level for the Gold Price comes in terms of a dead, defunct currency. So it speaks to ages past, rather than trying to shout above the short-term noise of talking heads on CNBC.

And whispering in a voice of paper ashes, it says currencies come and go, but metal can only be buried for so long... 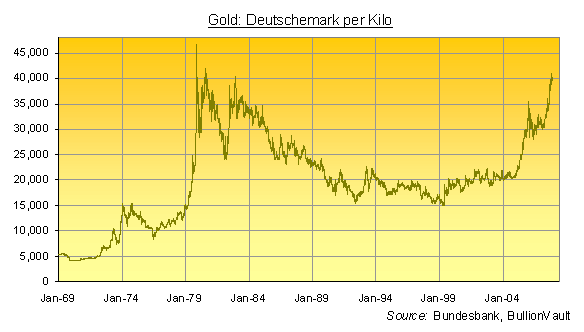 That tired old war-horse of Germany's glorious inflation-fighting past, the Deutschemark was finally put to sleep by the Bundesbank on New Year's Day 2002.

That was day when Germany – along with the rest of the 12-nation Eurozone – finally swapped its currency for the Euro. The new pan-continental notes and coins were to be used in cash transactions and settlement of debt, while the word "DM" was scratched off shop signs and the paper itself was stuffed into a blazing furnace.

The new Euro would rise from its ashes and bring German-style stability to the currency union's 300 million citizens. Or at least, that was plan.

Now Jean-Claude Trichet, current president of the European Central Bank, warns that Eurozone inflation will stay "significantly" above his 2.0% for the rest of 2008. Track the price of gold forwards from 1999 in Deutschemarks – the last entry in the Bundesbank's list of daily Frankfurt Gold Fixes – and you can see that the Gold Price, a leading indicator of inflation to come, agrees.

Ask any technical analyst with a blunt 2B pencil and a shatter-proof ruler. Now back at 40,000 DM per kilo, the price of gold has touched very long-term resistance. Since 21st Feb., in fact, gold has recorded an Afternoon Fix in London equivalent to 40,000 DM or more on ten separate occasions.

In the days of the Frankfurt Gold Fix, gold managed that feat only 15 times in total. And if you think the Gold Market action so far this month has been frantic, just check how violent the action was either side of those DM peaks back in the early 1980s.

In the first run-up – during the global inflation panic sparked by the second Opec oil crisis, the Iranian hostage crisis, and the Soviet invasion of Afghanistan of late-Jan. 1980 – the Gold Price in Deutschemarks doubled in less than four months.

It then dropped 23% of its value for West German investors inside two days!

Rocketing higher again, the price of gold recovered the 40,000 DM level in late Sept. 1980 – but only for five days. Gold then touched that level once again for two sessions the following winter, slipping back from 40,000 DM per kilo on 3rd Feb. 1983.

It took another quarter century to get there again. And in the meantime, gold lost value almost every year until the Central Bank Gold Agreement capped government gold-sales in mid-1999. The monetary metal ticked gently higher from there to the start of 2005, before breaking out and doubling to 40,000 DM late last month.

"Monetary stability is linked up with general social stability – and with political stability," as Otmar Emminger said in his inaugural speech upon becoming president of the Bundesbank in 1977. Who could ask a bundle of notes and coins to do more?

"The German public," as the economist Rudolf Richter noted in an essay of 1999, "after losing their savings twice within 25 years (1923 and 1948), definitely wanted a stable currency. No Bonn government in its right mind would have put the Bundesbank under pressure."

Hence the West German central bank's mandate to cap consumer prices by capping the supply of money itself. Memories of the Weimar inflation that followed World War One – plus the worthless Nazi Reichsnotes piled up during World War Two – still stand in sharp contrast with the American media's obsession with the Great Depression.

Where Ben Bernanke now sees soup kitchens and deflation, the central bankers working to defend the German currency in Bonn for five decades could only see runaway inflation of the money supply. Twice.

"In 1923, when Germany could no longer pay its First World War reparations," writes Mike Hewitt on his DollarDaze blog, "French and Belgium troops moved in to occupy the Ruhr, Germany's main industrial area. Without this major source of income, the government took to printing money which resulted in hyperinflation.

"At its most severe, the monthly rate of inflation reached 3.25 billion per cent, equivalent to prices doubling every 49 hours. The US Dollar to Mark conversion rate peaked at 80 billion."

Sick of inflation yet? Come World War Two, incredibly, the German people had to learn their lesson again. The Nazi state converted its debts into banknotes, pushing the volume of currency in circulation up from 11 billion Reichsmarks in 1939 to more than 70bn by the time Hitler poisoned and then shot himself, his dog, and his mistress. The survivors were forced to use cigarettes, chocolate, tinned beef and soap as money once more – because the government-ordained notes and coins had lost all currency thanks to their huge over-supply.

With global inflation ticking higher three decades later, the Bundesbank adopted its first money-supply target in 1973. In December of 1974, it began announcing the target to the public each year, and inflation was whipped. By the fall of 1978, and with inflation in the US and United Kingdom lurching back towards double-digits, consumer prices in West Germany were rising by barely 2% per year. 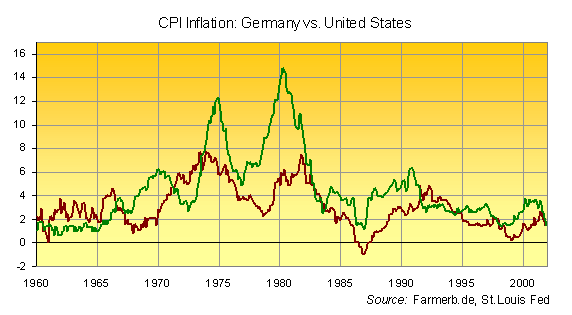 But the initial relief allowed a flirtation with looser money to creep in. By 1981, inflation had reached 6.3%, and so the Bundesbank set about slashing its money-supply target.

It cut the target from a maximum of 9% growth to just 5% annual growth by 1985. "Only in one year of this period, 1983, did money growth slightly exceed the target range," says Robert L. Hetzel, writing in the Economic Quarterly of March 2002.

"Broad money (M3) growth fell from 10% in the 1970s to 6% in the 1980s. By retaining price stability as its primary objective despite the high unemployment rates of the 1980s, the Bundesbank gained credibility for its policy of price stability."

Come the end of the 1990s, the Bundesbank had whipped inflation for more than five decades. Politicians in Rome, Paris, London, Madrid and Dublin looked to the West German model – but refused to apply it themselves.

So why not get the Germans to apply it, instead...now that was an idea! Only thing was, that pesky money-supply target kept getting in the way of growth, of debt, of real estate prices. And so with inflation – like interest rates – sitting near or below the 2% annual target, Europe quietly did away with its limit on money supply growth.

The M3 measure of the Eurozone's money supply – the same M3 measure that the US Federal Reserve stopped tracking and reporting at the start of 2006 – was supposed to grow by no more than 4.5% per year. This initial target represented one of two "monetary pillars" supporting the entire Eurozone project when the European Central Bank took over the reins of policy at the end of the 1990s.

At last count, however, Europe's M3 money supply was ballooning at a near three-decade record of 11.5% per year in January 2008.

What does that mean for you, me, and the rest of the world trying to defend our savings and income against the global upturn in consumer prices? All too often, short-term traders looking for quick gains in gold will point you to a very short-term connection between gold and the Euro. And fair's fair.

It's a fact that gold and the Euro often do move together against the US Dollar day to day. Between the start of 2007 and late-March 2008, for example, the Euro and gold moved in the same direction on 291 out of 310 trading days according to Reuters data – some 94% of the time.

But the Euro moved in the same direction as crude oil prices on 300 days – fully 97% of the time. And no one would claim that the Euro's rise versus the Dollar has stopped the price of petrol from going up on Germany's autobahns.

What's more, both the Euro and gold rose against the Dollar on 170 trading days between Jan. 2007 and late-March 2008. So their apparent correlation is built on the plain fact that the US currency has consistently lost value, drip by drip and tick by tick.

On average, the Dollar has lost 0.05% of its value against the Euro every trading day since the start of 2007. Measured in gold, it's lost a little bit more each session, down by 0.06% on average.

Put another way, gold's gain over the Dollar has consistently out-stripped the gain for US investors holding Euros. All told – and trading just shy of DM 40,000 per kilo-equivalent today – the Gold Price in Euros has risen by more than 24% for French and German investors since the start of last year.

Will it push higher, breaking new ground above the all-time record peak of DM 46,530...? Or might gold now turn tail, falling in the face of below-zero real Dollar interest rates and a three-decade surge in the European money supply?

The long-term chart says gold faces resistance. Either that, or it's about to break into historic new territory as the world has to re-learn to conquer inflation.