END_OF_DOCUMENT_TOKEN_TO_BE_REPLACED

The price of Gold just hit a new record high against the world's top 10 currencies...

Jumping to 8-month highs against the Euro, Swiss Franc and Canadian Dollar, it also took out fresh records versus the Indian Rupee and Chinese Yuan. 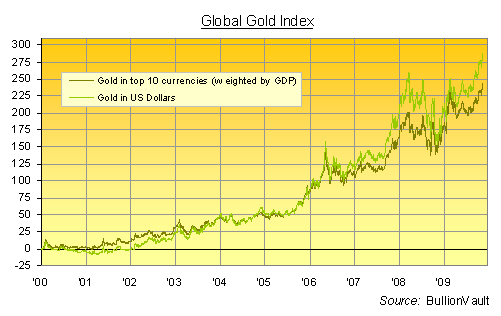 Buying 200 tonnes of metal from the IMF, the Reserve Bank of India sent gold to new highs in terms of all the money that counts at the start of November.

Weighted against the world's top 10 currencies by GDP, the price of gold broke its previous high on Wednesday this week. Shown as a percentage change since Jan. 2000 above, BullionVault's Global Gold Index does indeed lag the Dollar price (244% vs. 289% to date), but it's clearly beaten all other asset classes so far this decade.

Friday's news that America's job-loss recovery is worsening then confirmed the new record, peeping just above the previous hit set in Feb. of this year.

And given what India's move says about Dollar diversification (that a lump of metal yielding zero and trading at all-time record highs also beats holding Euros, Yen, Yuan, Sterling, Reals, Loonies, Roubles and Pesos...), gold's return to central-bank bids might be a long way from finished.

Ten years ago, nobody wanted it. Least of all those central banks in Europe holding the most but about to launch a new currency – one lacking any sovereign-government backing, let alone a link to Gold Bullion.

By the time they stopped selling gold amid the financial crisis wrought by their last flirtation with record-low returns to cash, the rising powers of China, India and Russia – moving from fifth, ninth and twelfth to 4th, 8th and 10th in terms of global GDP respectively – had already begun hoarding metal themselves.

Only now, the United States, Japan and Europe are holding rates at fresh record lows as near to zero as damn it. If we were in the business of speculating on the future path of Gold Prices, we'd guess that the official bid for gold, let alone private-sector demand, looks likely to hold strong from here.