END_OF_DOCUMENT_TOKEN_TO_BE_REPLACED

Did gold play the ghost at this weekend's G10 central banking banquet...?

"Never shake thy gory locks at me...If thou canst nod, speak too."
Macbeth to Banquo's ghost, who's sitting in his chair (Macbeth Act III, Scene iv)

LAST WEEKEND in Basel, Switzerland, central bankers from the G-10 group of rich nations met up for one of their regular hoe-downs.

You can guess the main event in between canapés and champagne – academic chit-chat about interest rates, political pressure and banking supervision. The global financial crisis surely got plenty of air-time, too.

After all, Ambac Financial – the giant "monoline" bond insurance group – just issued and sold $1.5 billion in new shares and convertible bonds, raising cash to defend its credit rating but accepting a 9% discount to ABK's stock-market price.

"The stock offering nearly tripled the number of Ambac shares outstanding," according to Reuters. ABK closed the day 15% lower.

Real estate investment trusts also slumped last Thursday after Thornburg Mortgage – which lost 60% on the day – admitted to the New York authorities that it missed a $28 million margin call from J.P.Morgan Chase. And here in London, a number of major hedge funds were rumored to be right up against it after their brokers called in credit lines and forced a fresh wave of liquidations.

All told, says Nouriel Roubini – a former advisor to the US Treasury – "the risk of a systemic crisis is rising. The markets are becoming utterly unhinged, the financial system is broken and everybody's in de-levering mode..."

Hey gentlemen, let's clear the gloom! Who's for a break? Shall we say one hour for lunch...?

But wait! Who's that – already sitting in Ben Bernanke's place? 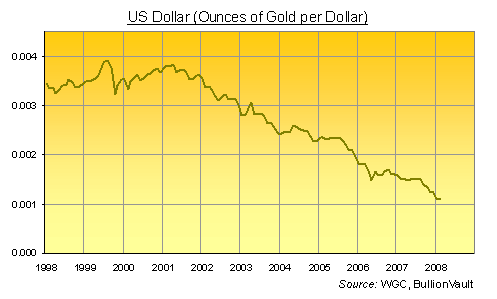 "Letting gold go to $850 per ounce was a mistake," wrote Paul Volcker – chairman of the US Federal Reserve during the last great Dollar crisis of the late 1970s – in his memoirs.

"We had to deal with inflation," he went on in a PBS interview of Sept. 2000. "There was a kind of great speculative pressure. It was the years when everybody wanted to buy collectibles from New York. The market was booming, and other markets of real things were booming – because people had got the feeling that things were inflating and there was no way you could stop it."

At one policy meeting in 1979, the Fed committee noted that "speculative activity" in the Gold Market was spilling over into other commodity markets. An official at the US Treasury called the gold rush "a symptom of growing concern about world-wide inflation."

What a mistake! Barely nine years after Richard Nixon floated the US Dollar free of that "barbarous relic" known as the Gold Standard – and scarcely 18 months after the International Monetary Fund "eliminated the use of gold" as money altogether (or so the IMF thought) – just mentioning the bull market in Gold Prices only served to push the gold price higher!

Would the policy wonks never learn? You can't dispense with gold as money and yet dare to speak its name.

Put another way, perhaps, you just can't dispense with gold as money. And maybe that's why the US government still can't breathe a word about the 8,500 tonnes of Gold Bullion it (claims that it) owns.

Acknowledging gold's place in US reserves would only spark a fresh flight of Dollars into the hard asset security of physical Gold Bullion.

"All of a sudden," writes Peter Bernstein of late 1979 in his tome The Power of Gold, "central banks began to make noises about restoring gold to its traditional role in the monetary system, a complete reversal of recent policies of selling gold out of their reserves.

"The US undersecretary of the Treasury declared before Congress that 'Gold remains a significant part of the reserves of the central banks available in times of need.'...Then Treasury secretary G.William Miller held a news conference at which he announced that the Treasury would hold no further gold auctions [saying] 'it doesn't seem an appropriate time to sell our gold.'

"This was a curious observation in light of the auctions that the Treasury had conducted at much lower prices since they began the practice five years earlier [and] within thirty minutes of Miller's remarks, the Gold Price shot up $30 an ounce to $715. The next day it was up to $760. The day after gold hit $820."

Of course, here in March 2007, thirty-dollar moves are a daily occurrence. Anyone choosing to Buy Gold today had better get used to this kind of volatility, too. But it's nothing next to the volatility now hitting world confidence in government money and financial debt.

The big difference between now and the 1970s bull market in gold is that even as the US Dollar is sinking to all-time record lows – both against gold and the rest of the world's currencies – the world's financial markets also face a genuine meltdown.

The reason? Credit default – or even the merest hint of it. This spook is now jumping out of cupboards and walking through walls right from Sydney to California, and all points in between.

That's why, last time they met, just after the Northern Rock collapse hit the United Kingdom (the world's fourth largest economy), the G-10 central bankers agreed in December to coordinate half-a-trillion in short-term loans to the US and European money markets.

Pumped into the private banks by the Federal Reserve, Bank of England and European Central Bank, this flood of emergency lending really did ease the panic in Western money markets, bringing open-market interest rates down from a seven-year high towards the central banks' "target" rates.

But still the ghost won't die! Because interbank lending rates have now shot higher again – a clear sign that "banks are hoarding cash because of fears of further hedge fund collapses," says the Financial Times.

Whereas physical Gold Bullion – if owned outright as your property, rather than via "trust" fund trickery or the counterparty risk of futures and options – still represents the only liquid financial asset that nobody can default on. And the danger of default is what's driving investors out of stocks and bonds into – oh no! – into Dollars!

"Boo!" says the spook, dancing on the dining table...

"In the US," the FT says, the "three-month Dollar [rate] has fallen, but it still remains well above the expected Fed Funds rate, suggesting bankers view the outlook as extremely uncertain [after] the collapse of Focus Capital, the New York hedge fund, and the failure of Peloton Partners' asset-backed securities fund."

So put the surging oil price and war in the Middle East to one side, if you can. Try to forget about the US recession too...as well as the crisis now looming in Eurozone government debt, world food prices and Russian gas supplies.

Just take one Dollar crisis and add a global financial panic after five years of unprecedented credit expansion. What do you get? On one side of the table, a record bid for physical Gold.

And on the other, a gaggle of central bankers – holed up in Switzerland – pale and quaking like they just saw a ghost.