END_OF_DOCUMENT_TOKEN_TO_BE_REPLACED


YOU CAN, IF YOU WISH, link the historic surge in Gold Prices starting mid-August 2007 to many seemingly disparate things.

Pick the right link, and you might be able to tell whether it's worth your Buying Gold today.

One such link is the price of money, as decided by the US Federal Reserve. Gold's stellar 58% gain in the seven months starting 17th August began with the Fed's first change to US interest rates in 18 months.

Last August's 0.25% cut to the Fed's "discount rate" – the interest rate it charges commercial banks to borrow short-term funds – was the Fed's first interest-rate cut since July 2003. By the end of March 2008, it became a 3.0% cut to the bank's key Fed Funds target.

And gold's initial jump turned into a pole vault... 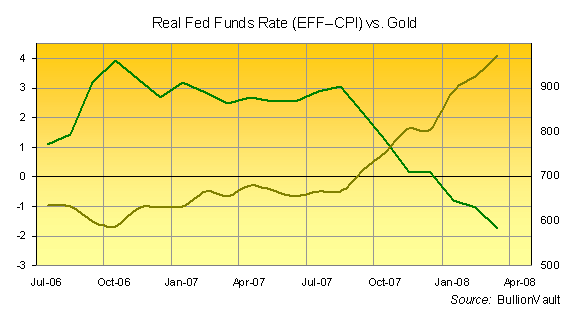 The real cost of borrowing Dollars – or rather, the real returns paid to anyone saving money today – clearly impacts the demand for Investment Gold.

You can measure this real rate of interest quite simply. Just subtract the rate of Consumer Price inflation (CPI) from the Fed Funds interest rate, as on the chart above.

Then compare this changing value to the price of gold, and you'll see that when the real returns paid to cash sink below zero, investors and savers tend to pay more – or demand more – for Gold.

That's what investors and savers did in the 1970s. It's what they did NOT do again until the turn of this decade, when real US interest rates next sank towards and below zero as the Fed slashed the cost of money in response to the Dot.Com Collapse.

Why Choose Gold When Real Interest Rates Sink? Because if central bankers, driven by a fear of "deflation" in asset prices and consumer spending, try to stop the public hoarding cash, then people will seek out reliable stores of value instead, led by hard assets.

Unlike real estate, Gold Bullion remains a highly liquid, easily priced asset that can store huge quantities of wealth in a very small space. Unlike corn or crude oil, it needn't cost you a fortune to store or insure either – just 0.12% per year at BullionVault, for example.

Most crucially, and as the action since August's first Fed cut reminds us, gold has acted as a reliable store of wealth – immune to government meddling – for more than 5,000 years. In times of monetary destruction, or so history says, it's human nature to seek an escape from fast-shrinking currencies.

And if you won't study history when defending your wealth, just what will you study instead...? 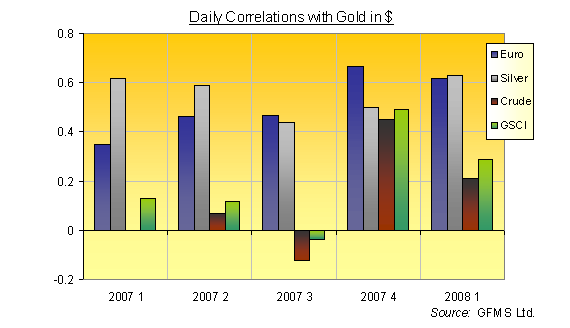 Another important connection – also related to the Fed's current rate-cutting cycle – sits in the currency markets.

In particular, look at the Euro/Dollar exchange rate. Because as the Dollar sank vs. the Euro in the back-half of 2007, daily movements in the US Dollar gold price were more strongly linked to the Euro than they were to crude oil, the broad commodity markets, and even the price of silver – gold's poor cousin in the precious metals market.

This "correlation co-efficient" would stand at zero if gold's daily movements bore no relationship whatsoever to the Euro. It would be negative if gold rose when the Euro slipped back (as happened to oil in the fall, albeit marginally as the chart shows above). The correlation would stand at 1.00 if they always moved together in lock-step.

And as of last month, Gold and the Euro were more tightly connected with a correlation of 0.62 than gold and crude oil (0.45) or gold and the broad Goldman Sachs Commodities Index (0.29).

What does this tell us? First, the Gold Price is behaving much more like a currency than it is acting like a raw material. This is unsurprising given what little use gold has as anything other than a store of value.

Barely 15% of last year's total gold fabrication worldwide ended up in either electronics (as gold bonding wire), coating for Space Shuttle windows, or in people's teeth as dental fillings. But that lack of apparently practical use – which actually grew by 49 tonnes from 1998 to total 411 tonnes in 2007 – doesn't mean gold is useless.

You'd hardly say the European single currency holds zero value, correct? But you try fuelling a jet engine or building a highway with Euros today, and no end of bloggers and financial hacks will step up to say your failed experiment just proves that it's useless.

That's why smart institutions such as the Royal Bank of Canada trade gold alongside the Euro on their currency desks, rather than handing it to their commodity teams. If you think the long-term decline of the Dollar is only set to grow worse, you might want to consider joining them, too. 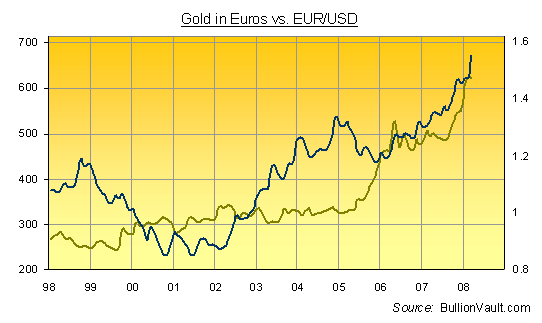 As you can see, the Gold Price in Euros has risen by more than 160% from its lows of 1999, even as the European currency has surged against the Dollar.

The upshot? Don't be misled by that strengthening correlation between gold and the Euro. You would still have better rewarded a bearish view of the greenback in gold than in the European single currency or any other major world money. And while the Euro has risen by 48% against the Dollar since March 2003, gold outpaced that gain by a further 97% on top.

But just before you open a new internet window and type "Buy Gold" into Google today, hang fire for a moment. Because yes, the Dollar's 12% loss vs. the Euro has somehow created a 28% gain for European gold investors since last August. And yes again, the Fed's new rate-cutting campaign still has no firm end – let alone a reverse – in sight.

But if everything's lined up for a fresh surge in world Gold Prices, why did the market pull back so sharply in the middle of March? Plunging 15% from its new all-time record above $1,030 per ounce, the Gold Market now stands some $100 lower. The Euro, in contrast, has risen since then. So too did the oil price.

The latest cut to Fed interest rates lopped another 0.75% off the gross returns paid to Dollars as well. So why the big swoon?

"This sharp reversal in price cannot be explained by a stronger US Dollar," note the team at Virtual Metals in London, writing in the April edition of Metals Monthly on behalf of Fortis Bank. "Gold's decline measured in Euros has been larger than in Dollars.

"Nor can [the drop] be explained by a reduction in inflationary expectations, as this hasn't happened," they go on. "Instead it seems to be narrowly based on improving sentiment in the credit markets..." 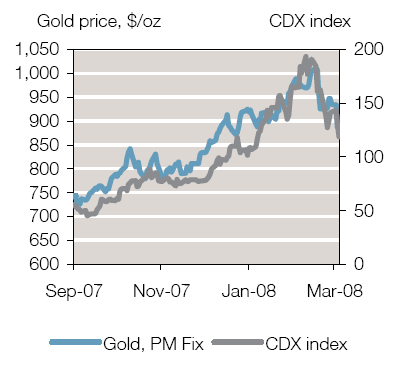 This chart "shows a close relationship since October 2007 between the Gold Price and the benchmark Markit CDX investment grade index, which measures the risk of credit-swap defaults," explain Matt Turner, Gary Mead and Jessica Cross at Virtual Metals.

In plain English, the Markit CDX measures the cost of buying insurance against non-payment by 100 big corporate borrowers in the United States. It rises when bond insurance becomes more expensive, and falls when fear of default subsides and the cost of insuring bonds falls.

And "as the Bear Stearns panic subsided [in March] the index fell sharply," notes Virtual Metals, "and so did gold."

Put another way, Gold didn't only surge on the Fed's rate-cutting frenzy to mid-March. It also gained as institutional investors ran for cover amid the world banking crisis – a crisis which has yet to end.

No one's to create at will, gold is also no one's liability – not if it's owned outright, rather than as a mere credit on a gold dealer's ledger. Incredibly, London professionals have told BullionVault, around 97% of the world's gold dealing take place on this kind of "unallocated" basis, attaching a real risk of default to the vast bulk of day-to-day gold trading.

This market in late 2007 "was dominated by institutional and high-net worth investors," the group's Gold Survey 2008 goes on. "Many of the latter bought gold as a safe haven, soon after the the sub-prime credit crisis erupted."

Demand from smaller retail investors, in contrast, "grew over the year (and notably in the last couple of months), but its contribution to total investment remained marginal overall."

In short, the mass of private investors and savers still have yet to Buy Gold or even consider it. So if you were concerned that gold might be reaching some kind of bubble, you might want to consider the absence of "last fools" to date.

You might also want to note that, so far, the threat of US corporations defaulting on their debt obligations has been more imagined than real. Just what happens to the price of insuring corporate risk – and therefore the price of Gold – when debt defaults really do start to turn higher?