END_OF_DOCUMENT_TOKEN_TO_BE_REPLACED

After 7 years paying no-brainer gains vs. the Dollar, gold and the Euro have split...

FOR THE VERY BEST PART of seven years running, it looked a real no-brainer.

Buy Gold, sell the Dollar. Why? Because every day was a GUDD day:

That's how my former colleague (well...boss) – Bill Bonner of Agora Inc. – christened the phenomenon in his Daily Reckoning. And thanks to the Federal Reserve slashing its rates way below everyone else, it's how things were pretty much day-in, day-out between 2002 and the end of 2008. 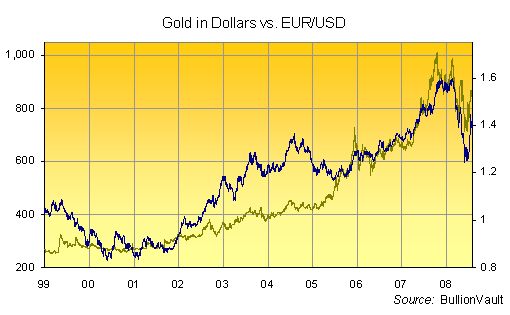 The trade worked in reverse too, however. Dollar up – not least vs. the Euro – meant gold down.

And that meant investors sat on the wrong side of either got whacked when the no-brainer finally proved to be brainless in 2008. Both the Euro and gold got smashed, starting in spring of last year.

Measured against the Euro – up-start challenger for its "reserve currency status" – the Dollar recovered one-half of its 2002-2008 losses inside just 3 months (July to Oct. '08). Versus the dumb lump of metal – which it had usurped 50 years earlier – the Dollar knocked gold back by one-third.

But then this year – and only for four weeks so far in 2009 – anyone selling the Dollar for Euros while Buying Gold also got a real brain-ache on top. 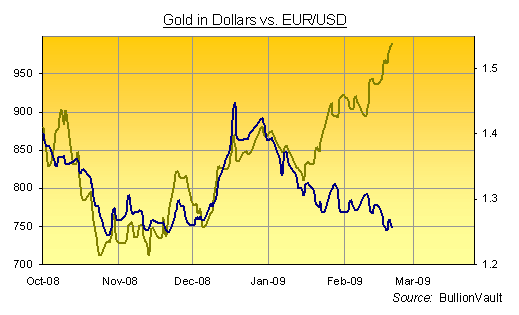 Call it diversion, call it decoupling, or call it a cab if you must.

But given the political, financial and capital risks facing the European single currency right now, we guess it means gold now stands apart as the safe haven of choice.

Treasuries are out...unless you think earning 2.5% per year until 2039 is a safe bet. Clearly bond buyers don't, selling 30-year notes lower from New Year's – and pushing yields more than one per cent higher – even as world equities dumped over one-sixth of their value.

So the dash for cash of course means buying Dollars for now. Especially as the greenback's challenge for world domination is hamstrung by its weak friends and neighbors.

"You have a series of countries that are really in trouble," he added, ribbing the Baltic states, Hungary, Belarus and Ukraine. Hence the ongoing rise of the Dollar against the politically stretched single currency. Hence the clear Dollar-hedge of Buying Gold alongside – you know, just in case the greenback starts sinking, even as the world's other main paper slides further.

"We're going to add $4 trillion to $5 trillion to the US public debt over the next few years," chirrups Roubini, ever the joker. "Down the line, maybe two or four years, there may be a downgrade of even the United States."

No, it's not much of a punchline. But perhaps holding gold will at least raise a smile if things take a turn for the worse from today's happy-go-lucky headlines.