END_OF_DOCUMENT_TOKEN_TO_BE_REPLACED

Is the Eurozone just one U-turn away from a 20-fold rise in the value of Gold...?

HAPPY SELLERS a decade ago – back when Gold hit rock-bottom – might the Eurozone states now facing financial meltdown sell gold at all-time highs to help settle their debts.

Lumped together, the 16 Eurozone nations, plus the supra-national European Central Bank, hold almost 11,000 tonnes of gold between them. That's more than three times the central-bank hoard in Asia (3,008 tonnes all told). It's greater again than the United States' world-beating stash of 8,133 tonnes.

But even at today's record-high prices, selling the Eurozone's entire 10,797 tonnes of gold would raised some €338bn. That's not enough to cover the first €440 billion they've pledged to each other in cross-border loan guarantees. And it would barely dent the real problem – the union's €7 trillion national debts... 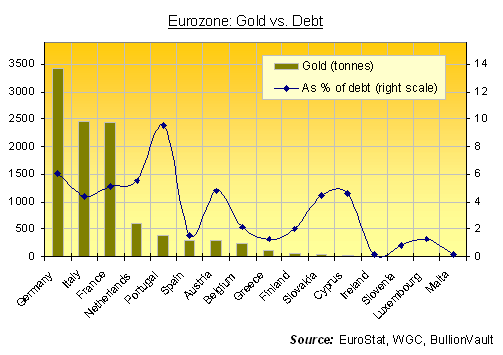 Had the 16 Eurozone states, together with the ECB, placed an order through their London dealers to "sell at the Fix" on Wednesday afternoon, gold's new record high would have helped, but not much.

Going alone, Portugal would do best (9.3%). The Big Three (of Germany, Italy and France) could settle just over 5% of their respective debt burdens.

Outside the Eurozone – but inside the EU-27, and thus exposed to the Eurozone's debt crisis – Bulgaria and Romania (40 and 103 tonnes) might think their gold hoards better used as cash than as metal (23% and 11.5% of national debt respectively). Whereas the United Kingdom, despite being Europe's sixth-largest gold hoarder, joins the Czech Republic, Estonia, Hungary, Ireland, Malta and Slovenia in being able to pay less than 1% of its national debts with its gold reserves.

Please note: This is all entirely frivolous, of course. Desperate leaders may do desperate things, but selling gold at a time of crisis won't be one of them – especially when, as shown above, it would prove futile...and especially after they made a policy, a decade ago, of selling at the bottom instead.

Perhaps, as BullionVault suggested to TheStreet last week, the Eurozone might pledge its gold as collateral for IMF loans – a move that would, in fact, only accelerate the re-monetization of gold...mobilizing its value, not denting it, by pawning it rather than selling.

But to pay off Europe's debts in full, the Gold Price in Euros would need to reach above €20,344 an ounce. And such a 20-fold gain would most likely mean the ECB had taken that final U-turn, agreeing to swap newly-printed money for government bonds and thus devaluing the currency to devalue its debt.

The equivalent Dollar gold price, by the way, needed to settle the US Treasury's debts with its current gold hoard, would be $47,080 an ounce. And again, selling gold to repay the national debt would require the same expedient first: