END_OF_DOCUMENT_TOKEN_TO_BE_REPLACED

Gold and the Euro joined at the hip? Not outside the daily noise they're not...

Which makes sense. Because when that isn't happening, "Gold adds to gains as Dollar falls versus Euro," says Reuters.

Thus the intuitive Dollar-gold pairing swings now one way or other in the financial pages...gaining here, falling there...but always joined together as the journalist's deadline is heard hurrying near.

The "whys" and the "wherefores" of a quick market comment demand it as well. Ask a professional analyst for a 10 or 15-word soundbite, and they'll most often tell you, if not vice versa, that "The Dollar is stronger, keeping precious metals under pressure."

Beyond the daily noise, however – and with the single currency unwinding its last eight months' action vs. the Dollar at the end of last week – Gold has in fact moved up against both.

You wouldn't know it from scanning the newswires. But since the Euro last crossed through $1.40 – the level it just slipped through once more – gold has risen 22% for US investors. And of course, it's risen by precisely that same percentage for German, French and Italian buyers too.

Because with the EUR/USD cross unchanged since May 2009, the rise in the gold price shows equally on both sides of the pairing. 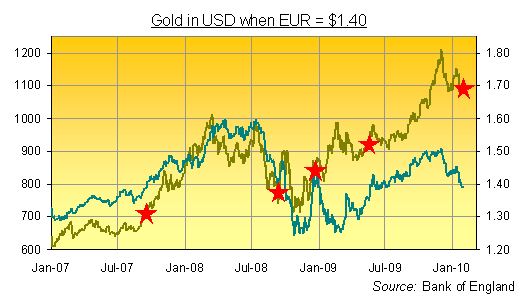 Yes, a daily rise in the Euro typically means the Gold Price in Dollar has risen as well. On a daily basis, their average one-month correlation now reads +0.51 since the single currency's launch. That's stronger than gold's correlation with any other asset bar silver.

But it would stand at +1.0 if they moved entirely in lock-step. And as the waxing and waning mapped in the chart above shows, the Dollar's demise hit the currency buffers back in summer '08.

Priced in gold, on the other hand, the greenback has continued to fall. And so too has the Euro.