END_OF_DOCUMENT_TOKEN_TO_BE_REPLACED

A DOUBLE TOP – or so technical analysts claim – is an ugly chart pattern that signals not just a reversal of trend, but an all-out collapse in prices.

The Gold Price just failed to breach and hold $1,000 an ounce, the "big top" for Dollar investors first reached in March '08.

So might that be it? Could be. Who knows?

One thing we're wary of here at BullionVault – along with accepting free drinks from strangers or reducing our own gold position until short-term interest rates reach and start sliding from double-digits – is trying to call the market.

That's not only because we aren't certified advisors (and let's face it, you'd need to be certified to advise anyone ahead of the coming law-suit bonanza). It's because we really don't know what's going to come next.

I mean, who could have guessed this little turn of events back in March. 1991...? 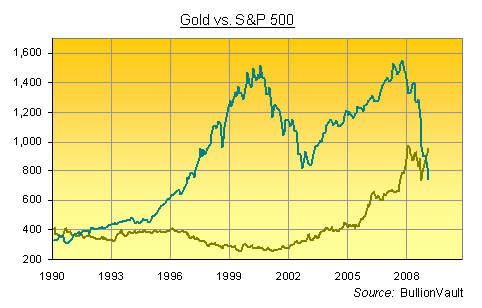 Trading at $370 an ounce, the price of gold crossed the value of S&P stocks 18 years ago to the day.

From there, it wasn't until Nov. 2008 that gold and the S&P 500 next kissed and parted again, heading off on their sweet, separate ways.

In between, US stocks rose four-fold, fell by one-half, rallied back to their top but failed again and fell off a cliff.

Gold, on the other hand, dropped one-third of its price by end-May '01, rising four-fold to March of last year, and then falling 25% inside eight months. It then recovered that drop and, well...that's where we stand today.

The bigger the top, the bigger the drop of course. And just closing Feb. below the 740 level of five-and-half years back, those 500 stocks averaged by the S&P index have sunk to a fresh 12-year low. So "the double top is complete" (in technical parlance) as "prices decline below the lowest low – the 'valley floor' – of the pattern" as one chartist website explains.

"An investor can expect the price to move downwards at least the distance from the breakout point less the height of the pattern," Trending123.com adds, relaying the aggregate wisdom of big-name technicians such as 1930s guru Richard Schabacker, 1980s legend John Murphy, and contemporary chartist Thomas Bulkowski.

Gold – in contrast once more – would not complete or confirm its "double top" any price north of $730 (again, end-month figure). But while trading volume was strong right throughout Feb.'s short stab at $1,000 per ounce, it was lighter than during March of last year – and lower volume at the second attempt is another key marker for potential double-top patterns.

Both the New York Gold ETF and Comex gold futures were less heavily traded; London's wholesale stat's should be released sometime next week. Anecdote points to much stronger dealing in physical gold, at least amongst those brokers we shared a drink with at Thursday night's bash for fellow LBMA members in the City. And the relative frenzy in coin-dealing surely outpaced last spring's $1,000 top.

The jury's still out, in short, on what the charts might suggest is a double top in the Gold Price.

And if 110 does prove the fate of the S&P index? It's hard to imagine the bid for gold slipping back as money pours out of equities.