END_OF_DOCUMENT_TOKEN_TO_BE_REPLACED

Ending its closest link with the Dollar in 19 years, gold is gaining from the global "race to debase"...

SO GOLD is suddenly all about the Dollar again. Or so you might think, says Adrian Ash at BullionVault.

After its longest run of moving in tandem with the trade-weighted Dollar Index since midsummer 1991 (45 trading days; average correlation +0.58), the gold price in Dollars resumed its commonly-assumed relationship with the greenback last Friday, moving opposite to the currency's forex fluctuations.

Tuesday then brought the first of this week's three new record highs. Only the Indian Rupee, to date, has suffered a similar fate.

What next? History says to expect further Dollar-led gold action ahead, at least in the headlines. Because any approach of the strong, positive correlation achieved this summer is typically followed by a stretch of strong negative correlation, with the Dollar and gold moving in opposite directions. 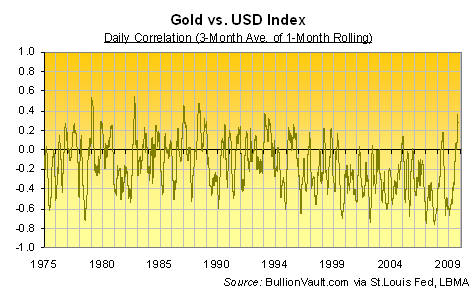 But that doesn't mean non-Dollar investors won't also see fresh gains or highs in gold, however – not with gold continuing what remains a powerful long-term uptrend against all major currencies, and not with central banks everywhere desperate to devalue their own money against the greenback.

"A lot of people are sensing a race to the bottom by central banks to print more of their currency, to reflate their economies, and gold is getting support from that."

The Bank of Japan is now actively selling Yen to buoy the Dollar, while the Bank of England has held real Sterling interest rates below zero for 24 months running. Whatever the political rhetoric during May's Greek deficit crisis, France and Germany would rather see a weak than strong Euro, while Beijing's new "flexibility" – a prelude, perhaps, to its new Yen buying strategy – has so far delivered only a 1.4% rise in the Yuan's Dollar value since June. 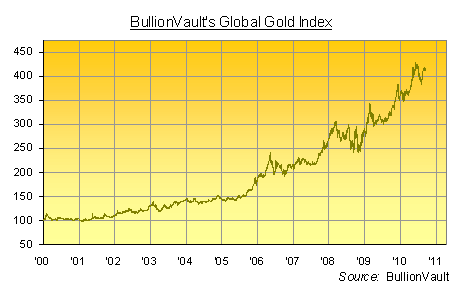 Longer-term, as you can see, gold's bull market to date hasn't really been about any particular currency. It really is about all of them.

Gold has quadrupled and more against all the world's money since the start of 2000, as our Global Gold Index shows. (It maps the daily gold price in the world's top 10 currencies, weighted by size of economy and starting at 100 on New Year's Day 2000). And most critically for traders trying to second-guess the Dollar gold price, throughout 2010 to date – and also across the last four decades as well – gold's correlation with the Dollar Index is statistically insignificant (+0.02 and minus 0.15 respectively).

Buying Gold - now simple, secure and cost-effective at the award-winning world No.1, BullionVault...