END_OF_DOCUMENT_TOKEN_TO_BE_REPLACED

A technical analysis would have to go back to Jan. 2006 to find the gold market behaving like it is today...

THE SUDDEN RUSH into gold investment by cash-savers and anxious stock holders during the banking panic of Sept. 2007 took the gold price to new 27-year highs on October 1st.

It finally beat the peak of May 2006, which had led to a 22% pullback and 16 months of disappointment for anyone Buying Gold at that top. The price of gold also rose sharply against Euros, British Pounds, the Japanese Yen and Swiss Franc – a classic sign in this bull run so far of a genuine gear-shift.

Nearly two weeks on, however, the Gold Market priced in Dollars has so far failed to regain those new highs. So was this sudden rally merely a repeat of May last year? Is it destined to end just as quickly and just as badly for new buyers? 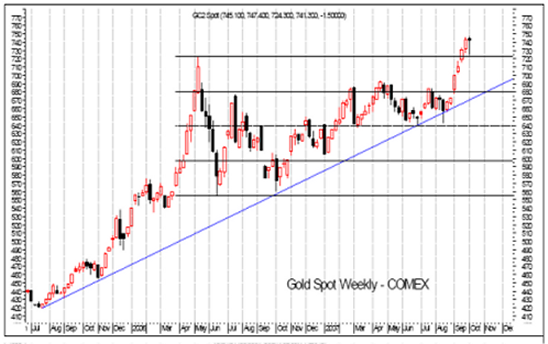 The ascending triangle – bounded at the top around $690 per ounce, with the lower edge marked by the uptrend starting in July 2005 – gave a clear signal that further gains lay ahead.

"This bullish formation usually forms during an uptrend as a continuation pattern," as StockCharts.com explains. The flat top and rising bottom "indicate accumulation" by investors. Put another way, an ascending triangle says that investors are buying the dips...just as they did in the gold market between June '06 and Aug. '07. (Check out those rising lows for proof.)

The uptrend in weekly Gold Prices, so clearly marked on Christopher Langguth's chart above, formed the bottom edge of the ascending triangle which built up to a break-through in US gold prices at the start of September. It had been seriously threatened during the summer, however.

Indeed, the sharp sell-off of mid-August this year actually saw gold break below its weekly uptrend. But during that week, of Aug. 13-17, the gold price managed to recover its near $15 drop below the trendline by Friday night's close. The rest, for anyone still awaiting their cue to Buy Gold, is now history.

"[Last week was] the first week in seven where Spot Gold traded below the previous week's low," as Langguth noted on Monday in his short TechniChris analysis for Mitsui, the precious metals group.

"The pattern suggests the buyers are finished," he added. "If gold falls back to $724.00 traders are likely to start discarding long positions. [But] right now there is no reason to be short."

Tell that to the professional market, though! "We've seen traders trying to short the market on several occasions," said John Reade at UBS in London earlier today, "but we're not seeing any long liquidation from Comex [gold futures] speculators, so it's continued to edge higher.

"I expect after trying it a few times they've realized it's not going to happen, and we could see gold push up from here."

Hence the weird shape of the Japanese candlestick above that marks last week's action in the Gold Market. After six weeks of rising prices, gold opened right around the previous week's close...only to whip violently each day, before closing ever-so slightly lower on Friday.

No previous end to an extended run in this gold bull market so far matched that pattern. The nine weeks of gains to 12th May 2006 were followed by a sharply lower Monday opening and a much lower Friday close; the price then sank by more than one-fifth in total. The seven-week run between Jan. and March of this year ended the same way; gold dropped nearly 10% after that.

Instead, a technical reading of the weekly Gold Charts would have to go back nearly two years – right back to Jan. 2006 – to find anything similar to what's happened so far since gold made a significant new high at the start of this month. 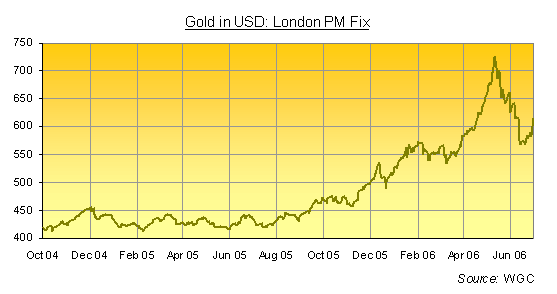 That pattern also followed an extended period of seemingly sideways action, the "long pause" starting with the 17-year high of Dec. 2004 that was broken six weeks earlier.

It came after committed gold investors patiently built their position – just as they did between May 2006 and Sept. '07 – and it was followed by a huge surge that took Gold Prices more than 32% higher in just over five months.

Might that pay-off reward gold investors again now? The pattern will only be clear once the coming move in the gold market has been and gone. But by then, any gains to be made – or losses to suffer – will have been and gone, too.