END_OF_DOCUMENT_TOKEN_TO_BE_REPLACED

NEXT YEAR will see the fifth anniversary since the global financial crisis first began, writes Adrian Ash at BullionVault.

There remains little reason to believe it will reach its end any time soon. Merry Christmas.

Banking and household leverage in the rich West has barely ticked lower from the credit bubble's historic peak of 2007. Financial leverage has only been reduced by a fraction, while governments have been stuffed like a French goose with that new debt spurned by the private sector since 2008.

So why this slow, seemingly permanent pain? Because interest rates are still set at zero, with no uptick in sight – an emergency measure that's now etched in stone. "There is a lot of financial stress out there," the UK insolvency specialist Begbies Traynor moaned last week. "[But] if it wasn't for low interest rates the number of insolvencies would have been twice what they are." Twice as many debtors would have enjoyed a write-down, in short. But do you really think their creditors sleep any better knowing what's keeping debtors in debt?

The gambit of low rates – first played in mid-2007 and now stuck – comes from studying the Great Depression of 80 years ago. If only the US Federal Reserve had slashed rates to zero, then today's central bankers could have avoided the deflation of their grandparents. Low teaser rates under Alan Greenspan have thus become permanently low revolving rates under Ben Bernanke. Which is where the mechanics of this depression stands apart from the downturn of, say, 30 years ago.

Back then, central bankers imposed deflation by hiking short-term interest rates towards 20% per year. Today the credit crunch is priced into the weakest balance-sheets only, and in the interbank lending market, where liquidity has vanished again in 2011. Contrast with the early 1980s' depression, when bond yields badly lagged policy in forcing through the deflation. Ten-year US Treasury yields, for instance, broke into double digits 10 months after the Federal Reserve's overnight target rate breached that level. It wasn't until 1983 that the curve reverted to normal, with 10-year bonds offering a higher rate of return than overnight credit held at the Fed.

The impact of this policy-driven deflation? A rise in the Dollar so strong – both in real purchasing and forex conversion terms – that it unwound all of gold's plunge for non-Dollar investors. 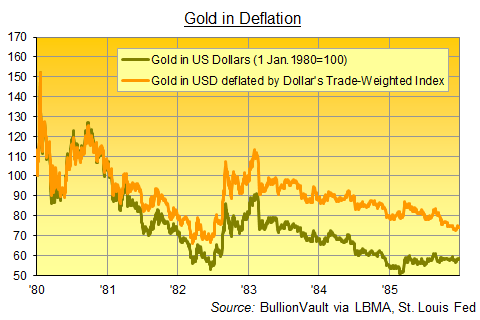 That we're living through deflation again today is plain, no matter how far the Fed and other central banks string it out. A deflation in credit, asset prices and economic activity. A deflation that doesn't need shop prices to fall; it's still "a deterioration of the monetary standard", this one characterized by volatility as much as deleveraging, but also squeezing debtors every time the Dollar rises.

That in turn is squeezing creditors, of course, now terrified of default and writedowns but so far spared the actual pain. The worst of all possible worlds results. No new investment, because lenders won't lend and debtors won't borrow. No write-down or write-off of existing debt, lugging a permanent drag onto economic activity. And meantime the Dollar remains money the world over, proving last decade's Cassandras early, wrong or just stupid.

Call me all three if you like; the last thing the world wanted pre-2007 or today is a rising Dollar. Not the US, China, Europe or anyone else. So just to screw the most people the most, that's what we keep getting. But only in fits and starts. Which like the wonderful nothing achieved by zero interest rates, might just be the very worst we could ask. 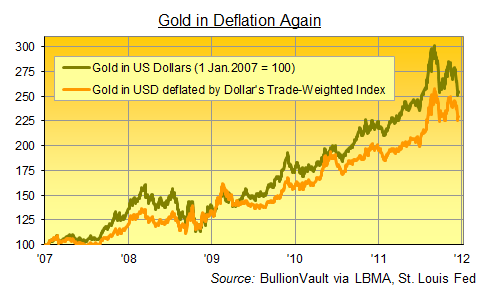 Plenty of chart analysts and media hacks will tell you today that the price of gold just broke below its 200-day moving average. The smarter ones will add that it fell through the uptrend starting with the great deflation of Lehman's collapse, too. But only in US Dollar terms, we note here at BullionVault.

Look at gold ex-the Dollar – as our bright orange line does above. The Dollar devaluation, forced through by Ben Bernanke cutting in line and slashing rates faster than anyone else in 2007-2008, worked such magic that non-Dollar investors are now – to date – wearing a much shallower top-and-drop pattern in gold so far.

This might matter. Because gold has outperformed all other assets (and very nearly all mutual and hedge funds too) since the eve of this crisis. Most people thank the inflationary response of central banks everywhere. A handful think gold's rise might instead be due to bullion offering the perfect deflation escape – a route to extricating yourself from the debtor/creditor relationship underpinning the vast bulk of alternative homes for your savings.

Either way, a Dollar rally is rarely good for the gold price. And no one, least of all the Bernanke Fed, wants to allow a persistent Dollar rally on their watch either.

Looking to Buy Gold? See how BullionVault can dramatically reduce your costs...