END_OF_DOCUMENT_TOKEN_TO_BE_REPLACED

How foreigners have paid for US entitlement spending...

I was the one who let you know

I was your sorry ever after

MAYBE it's coincidence, or maybe The Connells were onto something, but the years 1974 and 1975 stand out as key dates in the economic history of the United States, writes Ben Traynor at BullionVault.

December 31 1974 was the date Americans finally regained the right to own gold. The US removed the last of its significant capital controls in 1974, while 1975 was the time it ever ran a trade surplus.

That's not all. According to data from the US Treasury and the Bureau of Economic Analysis, 1974 was the year US national debt stopped falling as a percentage of economic output. For the rest of the 1970s, national debt held constant at around a third of gross domestic product, before beginning the long climb that would lead to the debt ceiling theatrics we've seen in Washington over recent weeks.

To understand why this was, we need to go back to August 15 1971 – the day Richard Nixon cut the Dollar's convertibility to gold. Take a look at what has happened since to the US federal deficit: 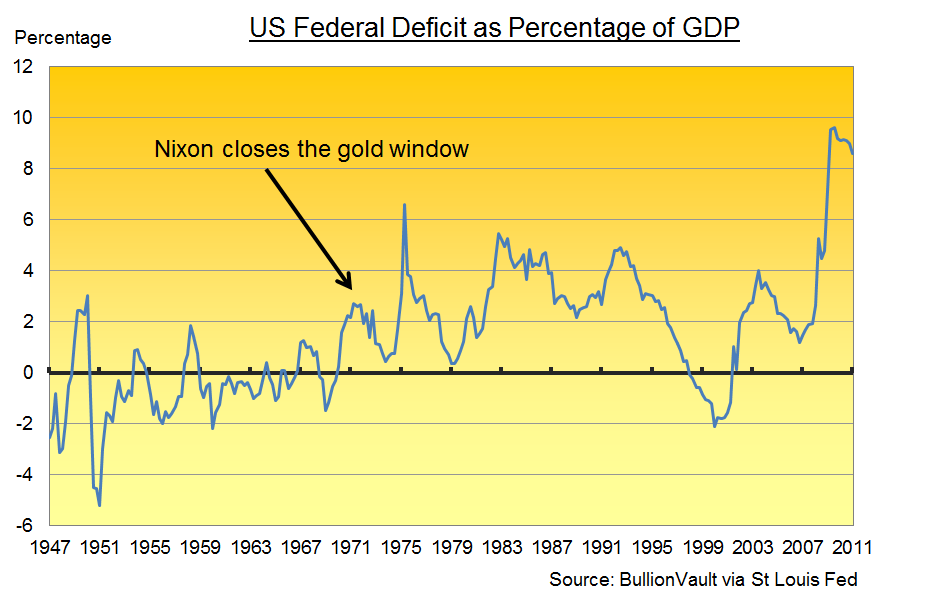 The chart shows the federal deficit, measured quarterly, as a percentage of GDP going back to 1947. For much of the postwar era, the US government was actually in surplus – shown on the chart as a negative deficit.

Not only that, for the period 1950 to 1974 the average deficit was just 0.7%, according to research by Kevin Kliesen and Daniel Thornton, economists at the Federal Reserve Bank of St Louis.

The period since 1974, however, looks very different. There was only one, short-lived surplus period towards the end of the last century, mostly the result of falling defense spending following the end of the Cold War. The rest of the period saw government borrowing – with the average deficit coming in at 3.1% of GDP.

Something had clearly changed. Kliesen and Thornton put the blame squarely on increased spending. Tax revenues, they argue, have remained at around 18% of GDP for at least 60 years. Government spending, however, has crept up.

In a follow-up essay, the two St Louis Fed economists argue that Social Security, Medicare and "other payments to individuals" account for much of this increase. Because these rising payments were not matched by rising revenues, or by spending cuts elsewhere, they inevitably led to the persistent budgets deficits that have seen US national debt grow to $14.3 trillion – a figure we are now very familiar with thanks to the debt ceiling "debate".

But what's the connection with gold? How did Nixon's action forty years ago pave the way for a growth in entitlement spending beyond what GDP growth would have justified?

The answer is that – thanks to Nixon's maneuver – foreign money could fill the gap.

The 'Impossible Trinity' of exchange rate economics states that a country can only achieve two of the following three goals at any one time: a fixed exchange rate, an independent monetary policy and a free flow of capital across its borders. Any attempt to achieve all three simultaneously is doomed to failure.

As an example, suppose a country wants to lower its interest rates in an attempt to boost domestic growth. This is liable to cause outflows of funds abroad seeking a better return elsewhere, putting downwards pressure on the exchange rate, and threatening the currency's peg in a fixed exchange rate system.

To maintain the peg, the country may try to support its currency on the open market. But it can't do this forever – it will run out of foreign exchange reserves. Its only options are to raise interest rates or abandon free capital flows by imposing controls. In a fixed exchange rate system it cannot maintain monetary sovereignty without capital controls.

By cutting the Dollar's peg with gold, Nixon also cut its peg to every other major currency, giving birth to the free floating era we have today. As a result, the US could abandon its capital controls without giving up control over interest rates.

It did just that. The result was an explosion in foreign holdings of US financial assets – with US Treasury debt a major destination for foreign funds:

The implication is clear – foreigners bankrolled the expansion of Medicare. Foreigners paid for the growth in Social Security. The question is...why?

The answer, of course, is they didn't have much choice. The US Dollar, as we know, is the world's number one reserve currency. So the rest of the world has to keep a healthy stash of Dollars as a prerequisite to doing business.

Not only that, with the US running a constant trade deficit other countries have been raking in US currency. They have to put it somewhere – and the US debt markets are the deepest and most liquid on the planet.

Severing the link between the Dollar and gold, then, not only led to an external trade deficit. It also allowed Uncle Sam to run a persistent – and larger – internal deficit, funded from beyond America's borders.

The question haunting the US Treasury is: how much longer will the world's surplus nations keep bailing it out?