END_OF_DOCUMENT_TOKEN_TO_BE_REPLACED

How come gold isn't soaring as stocks and debt hit the end of the world...?

WANT TO KNOW WHY your stock market shares keep on tumbling?

Credit – or rather, the lack of it.

The US bail-out, Europe's unity, Gordon Brown's sainthood...all these things are quite literally incredible. But nothing lacks credibility like trying to make fast money in finance right now.

Even David Einhorn, the baby-faced card sharp running Greenlight Capital, cost his clients more than 12% of their money last month. And he's the guy who spotted and bet on Lehman Bros.'s looming collapse 14 months earlier!

On the long side alone, "the 50 US stocks to which hedge funds are most exposed slumped 19% in September, according to research by Goldman Sachs, while the S&P 500 fell 9%," writes John Authers in the Financial Times.

"In contrast, the stocks that had a low concentration of hedge fund ownership lost just 2%."

Playing the same hot-money trades as leveraged investors, in other words, will hurt and hurt badly as they're forced to quit. "Much of last week's sell-off was driven by weak hedge funds that were forced to sell because their clients wanted out," reckons Jim "Crazy" Cramer at CNBC.

"And since you can't give them stock, you have to liquidate...you have to sell your stocks to give 'em the money...if you're a hedge fund that's faced with redemptions."

For once, Cramer's just about got it right, and for every dollar of leverage, you can account him right by another multiple of gearing. Hedge funds are either closing their trades and sitting in cash, or closing their trades and giving the cash straight back to investors – instead of facing law-suits and bailiffs demanding the Ligne Roset desks, Yang sofa, and that box at the New York Met' in its place. 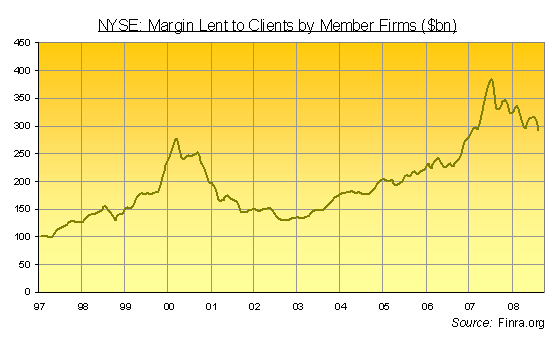 At the start of last year, the credit extended to clients of New York Stock Exchange members broke all-time records, beating even the huge Tech Stock top of March 2000.

Margin trading kept setting new records through to July '07, just one month before the credit crunch first ushered in the liquidity crisis, then the banking crisis, solvency crisis and now the Great Crash of Oct. '08.

It's since shrunk by one quarter. The S&P index has dropped faster still, down by more than one-third in the last 15 months, and fully 42% lower from the top of this time last year.

But hey – "I wouldn't necessarily say that leverage equates to risk," as an NYSE vice-president said to the Wall Street Journal at the very top of "peak leverage" in US stocks.

Here in London, meantime, spread-betting bookies – those financial brokers serving Joe Public with gearing (and the only bookmakers whose credit is recoverable by UK law) – are being forced to squish their own business, charging massive overnight interest rates on open positions even as new gambling slows.

Why? Because they're struggling to raise funds to cover their own cost of carry, trying to lay those bets off with futures and options. It's a new game altogether for even the biggest firms; as late as 2006, one leading spread-broker made money from 96% of its clients during their first 12 months on the book. Why bother to hedge when leveraged retail investors were so consistently wrong?

But now the cost of rolling a £1-a-point bet on the Pound vs. the Yen, to name one example, just went from zero to £6.60 ($11.50) per day at one leading broker. Rolling Spot Gold with the No.1 broker now costs some 0.15% per night of the total outstanding consideration.

That only makes owning the metal with no leverage or credit more appealing again (not least if you get Gold Stored Securely Offshore, with insurance included, for just 0.12% per year). Because the trouble with leverage is that it will bite your legs if you keep trying to ride it.

Just ask Jim Rogers – the legendary commodities bull – how his great calls on oil and natural resources paid off when his broker, Refco, went bust in 2005. 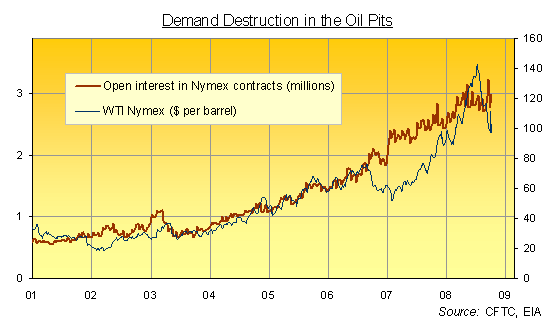 "Some hedge funds will [also] find it harder to make the same level of profits."

The loss of credit, however – and therefore the downside of leverage – is hitting different markets and thus different investors and profits at different speeds.

The total volume of Nymex crude oil futures and options, for instance, quintupled in the 10 years to Jan. 2008. Between the invasion of Iraq and the fall of 2006, its path pretty much skipped together with the path of crude oil prices step-for-step, too.

But while the oil price then took a breather, waiting almost 12 months to stop panting and push higher again, the volume of oil derivatives – the "open interest" as it's known – spread like bind-weed, swelling by one-half its size before oil next made a fresh top.

Does that put oil in the running for a bubble that's burst? So far, the price has sunk by almost one-half...while the open interest in Nymex contracts has shrunk by only one-eighth.

Compare and contrast that leverage – a four times gearing of derivatives shrinkage with the fall in front-month oil prices – with what's happened to gold. 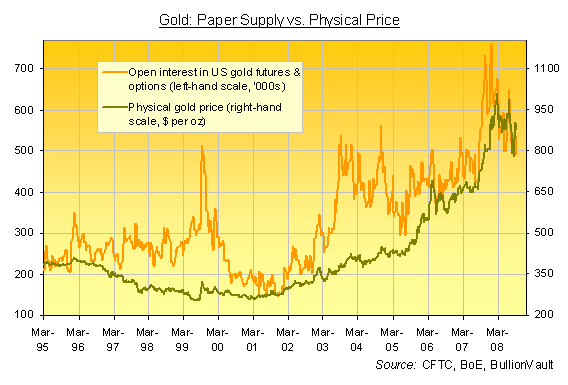 "Given all the volatility in the markets recently, why isn't gold acting as positively as we might expect?" asked a CNBC anchor late last week.

Her interviewee – one Jurg Kiener, head of Swiss Asia Capital, a Singapore-based investment fund – might have pointed to BullionVault's story Ghouls, Gold & the Stock Market (Feb. 2007) for the answer. Failing that, he might have at least checked the numbers and reported how Connecticut and Mayfair hedge funds are fleeing the market, as you can see in this chart.

Yet bizarrely instead, he claimed that "[in] the paper market on Wall Street...bankers continue to gamble" on gold. Which they don't – not compared with their gambling of January '08. (He also claimed – twice – that the London Metals Exchange (LME) trades gold-bullion futures, which is so wrong it hurts...).

Truth is, open interest in Comex gold futures and options has shrunk by one-third since the start of this year. And while the underlying Spot Gold Price has taken a tumble right alongside, the drop from its top now measures less than 18%. From the peak of Gold Futures betting, the price of physical gold has slipped less than 7% – showing just how strong the bid for actual metal remains.

"The tulipmania, part of speculative excitement over many objects [in the late 17th century], was fattened on personal credit," Charles P.Kindleberger reminds us in his Manias, Panics & Crashes (2000). "John Law [of the Mississippi Bubble] had his Banque Générale, later the Banque Royale; the South Sea Company, the Sword Blade Bank...

"The 1920s saw development of installment credit...From 1977 to 1982, shares and real estate were bought and sold on the Kuwaiti Souk al-Manakh with post-dated checks running into billions of dinars."

No credit, no leverage, in contrast, only comes to appeal after the bubble has burst. Finding an asset class which can then bear "demand destruction" amongst its leveraged buyers might just pay off as inflation inverts in all other prices.