END_OF_DOCUMENT_TOKEN_TO_BE_REPLACED

Devaluing money so no one can trust it seems an odd way to fix the economy...

GOLD'S TAKEN QUITE THE TUMBLE already this week, losing more than $30 an ounce between Tuesday and Wednesday before bouncing...falling...and then bouncing and falling again into the London close.

Take a look at the chart and it's clear the hot up-trend is broken. Gold Prices have slipped through their near-vertical move starting in mid-December – and not a moment too soon!

Any time you stumble upon a 15% surge in only six weeks, best stand aside and let some other fool pile in at the top, most especially if he wants to pile in with borrowed money. 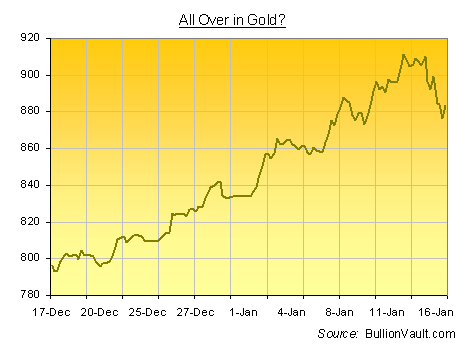 We can only guess at quite how much money has so far been lost by bullish gold traders this week.

The "net long" position of speculative traders – the total number of their bullish contracts minus their bearish betting – had never been greater than in the week to last Tuesday, the latest data available. With Gold Prices only pushing higher 'til Monday, you can bet there was never so much money at stake, gambled on gold's 38% surge in five months only running one way.

Of course, gold buyers holding just physical gold – that most simple of assets – are also showing a loss from the new all-time record of $914 per ounce. But at least they don't face any margin calls. And at least they've still got their gold. Whereas the Comex's most over-geared gamblers will now be calling their brokers – and locking in losses – just as soon as they drain that last shot of Wild Turkey.

Outside the leveraged losses of the derivatives market, meantime – and outside the offices of high-fiving derivatives brokers – what exactly has changed for gold since the start of this week? Behind the sound and fury, our guess here at BullionVault remains the same as it was long before this last sharp leg higher began:

The long-term trend for Gold Prices won't truly turn lower until the price of money itself turns sharply higher.

Sadly for anyone hoping to save for retirement or plan a new business, however, the world still has Ben Bernanke running the Fed – along with Jean-Claude Trichet at the ECB in Frankfurt...the team of "yes" men stacked up by the British government against governor Mervyn King at the Bank of England...and the zero-rate crazies of the Ministry of Finance in Tokyo, still blocking any move above 1% interest from the Bank of Japan.

In short, higher global interest rates look as likely right now as George W.Bush winning a third time this autumn. Double-digit interest rates – which is what it took to restore the value of money, stem inflation in the cost of living, and kill the bull market in gold at the start of the '80s – now look as remote as flared burgundy trousers and the first series of Dallas. 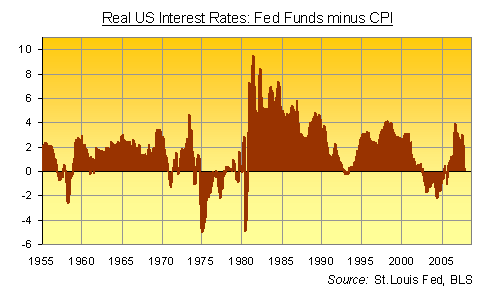 Fast forward to 16th Jan. 2007, and the latest US consumer-price data told nobody nothing they didn't already know today.

The cost of living in Dollars has shot sharply higher, unlike the returns paid to anyone caught mistaking those Dollars for wealth. So even without this week's ludicrous rumors of an "inter-meeting" rate cut worth 100-basis points, the Federal Reserve is now paying zero after inflation. And whatever the bond market says, Ben Bernanke has plenty of time to destroy America's currency by simply sticking to the Fed's pre-announced meeting schedule.

No "inter-meeting" rate cuts are needed, whatever the bond market might think. 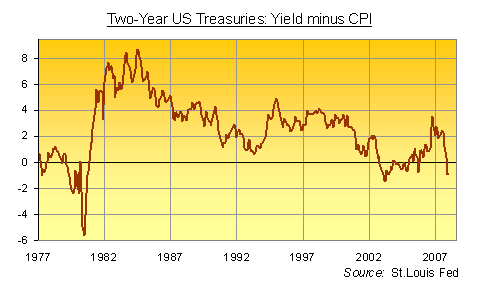 Over the last three months, said the Bureau for Labor Statistics today, the cost of living in the US rose at a 5.6% annual rate. Across the Atlantic in Europe, announced the EuroStat agency, consumer prices rose at a near-14 year clip.

Things are getting tough if you're trying to survive on a fixed income, in other words. They're worse still if you've been dumb enough to buy a fixed-income asset such as, say, US Treasury bonds anytime since the global credit crunch kick-started a fresh downwards lurch in real interest rates last summer.

The "safe haven" flight into the warm, welcoming arms of US government debt has been so massive, the 10-year yield has now sunk from 5.20% at the start of July...right down to 3.70% on Tuesday this week. So even fund managers possessed with enough foresight to put your retirement funds into Treasury bonds early would now be delivering less than zero in real terms.

Yes, the new bear market in stocks has helped feed the bull market in bonds. But losing money in stocks is no excuse for losing real value in bonds. Not unless you're paid for mere "relative performance" rather than actually delivering genuine gains to investors.

Back in the Gold Market, meantime, new investors have got to expect some kind of pullback, plus a consolidation to follow. The price action this month alone says it's long overdue! But where – and for how long – might the price of gold now sit?

The surge starting in summer '07, sparked by the Fed's first-round of rate cuts, looks at first glance just like the huge run-up of early 2006. That "cathedral top" ended in a blow-off around $720 per ounce; and it was preceded, as now, by a record-sized "long" position in Comex gold futures.

The Gold Market then dropped 25% inside two months. It took another 10 months to get even again, before shooting higher.

But the difference then was that Gold Prices had moved higher along with all things – bonds, stocks, crude oil, base metals, mortgage-backed derivatives, even commercial real estate prices. Since August '07, in contrast, gold has surged higher whilst the equity markets have sunk. Oil has failed to push higher, and real estate's dead. Nor can the real value of bonds, destroyed by inflation, hope to keep up.

Put another way, what would the world's physical gold owners now accept in return for their gold? What might they accept six months from now?

US Treasury bonds yielding less than inflation...? British Pounds losing value at the fastest rate in 16 years...? Euros to lend or invest into business, even as input prices for manufacturers outpace the very returns that investors can earn...? Japanese Yen paying 0.2% in the bank even before you factor in the rate of inflation...?

We can thank the world's central bankers for this pretty pass in financial affairs. Cutting interest rates below inflation, Bernanke & Co. believe they're somehow going to help both workers and business. Quite how remains unclear; devaluing money so no one can trust it seems an odd way to fix the economy.

That's as true for savers in Europe and China as it is in the United States. And it's not until interest rates turn sharply high – maybe up to double digits, hitting even the 19% enjoyed by US cash-savers at the start of the 1980s – that central bankers can hope to restore the world's trust in money.