END_OF_DOCUMENT_TOKEN_TO_BE_REPLACED

Call it "diversification" if you must, but Gold Bullion tends to do badly when other assets go up...

JUST SO WE'RE straight, nothing is certain to work, not forever. Not cash, bonds, stocks, real estate, commodities or Gold Bullion, writes Adrian Ash at BullionVault.

Whatever your finance advisor, economics professor, banker or coin dealer might tell you, no single asset class – bought today – can promise to hold or grow its value, year after year, until precisely the day when you need to sell it and spend. That's why the investment industry invented "diversification" in the name of spreading your risk. It wasn't just so investment bankers could fill you with the latest sure thing.

Buying hard assets, for instance, now looks a smart move in hindsight. But precious metals and commodities all failed right through the 1980s and '90s, even as inflation – their perfect backdrop, you'd think – continued running near peacetime records.

Between 1980 and 2000, residential real estate more than held its value, US stocks outpaced the cost of living 13 times over, Treasury bonds averaged 8% real total returns per year, and even cash-in-the-bank doubled its purchasing power. But commodities (on the CRB index) more than halved before you adjust for inflation. By the start of 2000, Gold's real value had slumped to one-fifth of what it was worth two decades before.

The last 11 years stand in sharp contrast, of course. Because just as in the 1970s – and all across the rich West – investors and savers have watched the price of natural resources rise (three-fold on the CRB index, in fact) as gold has risen year after year after year. Housing, on the other hand, first doubled then bust, stocks have gone nowhere (two slumps aside; dividends included) and the real returns paid to cash have long since sunk below zero.

Treasury bonds, however, remain a puzzle. Because they've continued to rise, extending their bull run to almost three decades. Cue Klingon-type furrows on the sharpest of brows...

"There is something remarkable about this combination. You would expect the performance of gold and Treasury bonds to be inversely correlated," said The Economist's ButtonWood column last summer. "Owning gold is traditionally seen as offering protection against inflation. And inflation is very bad news for owners of government bonds."

What gives? Both gold and major-government bonds, guessed The Economist, are "safe havens". But the crisis of 2007-9 can't explain this decade-long puzzle. Central banks are also pushing down yields, the magazine added, "artificially" keeping Treasury bonds high via quantitative easing as gold (apparently) flashes red on inflation. But again, Gold Bullion and bonds were both rising before Ben Bernanke wheeled out his printing press. So the simplest solution? Investors always knew central banks would resort to inflation, but not until the threat of deflation made buying bonds all along look smart as well.

"Investors who buy both Treasury bonds and gold are just hedging their bets."

Here at the start of 2011, gold has recorded 10 years running of real annual gains. T-bonds have been rising pretty much for three decades. Are the two buyers really the same person? In that little circle of London hedge fund johnnies I'm privy to, yes; long bonds and long gold has been a winning trade for one friend since 2002. But most gold buyers I speak to (and I speak to a few here at BullionVault) would rather chew glass than "hedge" their gold with Uncle Sam's debt. And besides, our iron law of investing – that nothing keeps working forever – says one half or both is going to lose favor sooner or later. 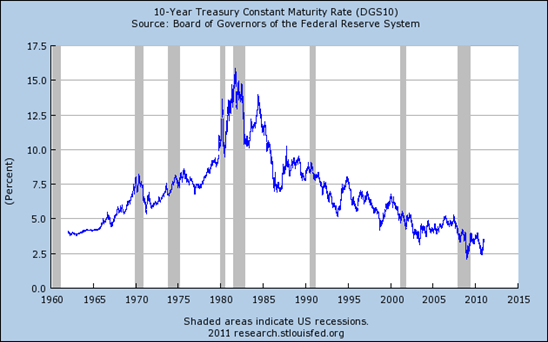 Whether or not investors fear (or love) inflation, bond yields fall when prices rise. And so, thanks to ever-lower interest rates since 1982, bonds have been rising for a generation today. 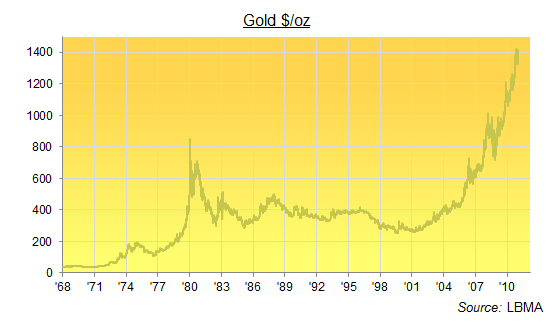 Gold, on the other hand, pays you nothing. And after a 20-year bear market, it's now been rising since 2001 – and really got started in 2005 – when those same falling interest rates started to look too paltry to a handful of buyers.

Whatever comes next, it won't come from a change in Gold Bullion. Sitting there at No.79 in the Periodic Table, the damn stuff can't rust, let alone pay you more (or less) in interest or dividends. So the end of gold's current bull run will only come from a change in what investors make elsewhere.

Bonds remain a conundrum, for at least as long as gold keeps on rising. But what about housing? Nobody wants it and there's a glut of supply...which in a world of tight credit might just sound like "contrarian bargain" if you down enough schnapps. So what about stocks, then? Everyone thinks they're sure to keep rising. Everyone except for the misery guts...

"Dylan Grice [at Société Générale] notes that if you look at the cyclically-adjusted price/earnings ratio (or Cape – basically a 10-year moving average of the price/earnings ratio) for the S&P 500 today, you will find it is in the top quintile of its historical range," writes Merryn Somerset Webb in the FT.

"Indeed, Andrew Smithers of Smithers & Co. puts it so high that he considers the US market to be around 70% overvalued. This tells us – on Grice's numbers at least – that the 10-year returns from here are likely to average around 1.4% a year."

Another 10 years of misery in stocks, of course, would surely trigger the same Death of Equities fever which swept global stock markets (and pretty much marked the bottom) as gold's last bull market peaked in the late 1970s. But those depths of fear and loathing remains a long way off today, and while there's no guarantee gold will wait for equities to bottom before turning lower, it tends to do badly when other assets go up.

Call it "diversification" or "insurance". Either way, as we saw at the top, gold tends to rise strongly when other things fail.